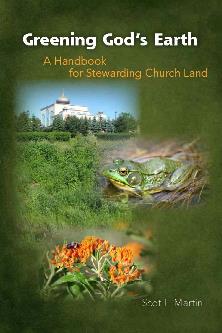 The Entirety of the Created Order.

I occasionally hear environmentally sensitive messages from the pulpit, targeted against the “it’s all gonna burn” theology that sprung from the same premillennial soil as Hal Lindsey’s The Late Great Planet Earth. It’s been over 40 years since that book was first published; my unscientific sense is that gardening-as-worship is no longer terribly controversial.

But just in case I’m wrong, here’s Scot Martin’s handbook, Greening God’s Earth: A Handbook for Stewarding Church Land,  dedicated to making the case for an ecumenical environmentalism. The first half introduces and defends the thesis: “to educate Christians on the possibilities that exist under their feet when they walk from the parking lot to the church entrance” (10-11) That is, the great wealth of land under church stewardship provides the local church with abundant opportunity to practice what Martin calls “creation care.”

Martin employs a number of tactics to convince us of the sanctity of his cause, appealing to scripture, to our sense of responsibility, to our humanity, to the image of God in all creation, and to our fear of a future stripped of all green growing things. “If we claim to love God, we will learn to love what he loves too” (12), namely the entirety of the created order, pronounced Good by its creator and destined for redemption. As we are heirs to Adam, Martin writes, we too are charged to care for the garden God himself has planted.  Martin goes on to share the rich history of Catholic, Orthodox and Protestant environmentalism, with specific examples of each; implicates shoddy environmental stewardship in the oppression of the poor; and makes a short trip into scientific sustainability arguments for good care of the land.

Martin acknowledges that the brevity of his format limits the depth of his arguments, but he does an admirable job at making a convincing case. Following his exposition, the majority of the handbook is given to specific projects that churches might tackle in pursuit of responsible land stewardship. None are all that Earth-shattering: composting, food gardening, installing rain barrels, environmentally positive landscaping (using native plants or a rain garden). Each gets a short treatment, with asides to share facts about or expansions on the main text.  Two case studies are presented: a church in Metro Detroit that replaced seven acres of turf grass with a native landscape (at a significant operating cost savings), and an Orthodox Church southwest of Chicago that has devoted much of its property to create an environmentally responsible watershed.

The overwhelming sense is that this kind of activity is actually fairly manageable, not terribly time consuming, ultimately a good thing for the community and the church, and why haven’t we attempted one or two of these ideas already anyway? Which I think is the point; once a church gets started in this direction, it will soon move on to more thorough resources (some are suggested in an appendix, where organizations for potential partnerships are also listed), leaving this handbook behind. Not much more could be asked of such a quick read, and Martin will have accomplished his goal—to engage one more congregation in the redemption of God’s Green Earth.