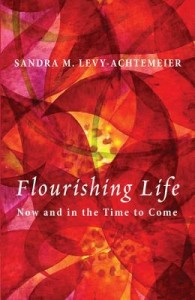 Flourishing Life: Now and in the Time to Come.

The above controversial quote, often attributed to C. S. Lewis, seems to be making the rounds on the internet of late. It periodically shows up on my Facebook wall and Twitter stream. I’ve seen it on email signatures. The quote’s intention appears to encourage the reader to recognize that spirit is real, and to focus on the ultimate, transcendent aspect of self, over and against the temporal reality of the body.

A minor point of contention is the source of this quote. Citation is lacking, and some point out that it appears to be a slight variation of a line from the 1960 science-fiction novel A Canticle for Leibowitz by Walter M. Miller, Jr. which tells the story of a post-apocalyptic order of priests. Others have traced it to 1892 and George MacDonald, an author of fantasy and fairy tales, whom multiple authors, Chesterton, Tolkien and even Lewis, greatly admired.

But the line also captures a larger debate within humanity, one that has spanned centuries: the question of the relation of being and becoming, of journey and destination, of the self to the body. Christianity, that is the way of living in response to the Biblical story of Creation, Fall and Restoration, centered on the victory of Christ over Death as witnessed by his Resurrection, offers a specific response to this question, but also leaves considerable mystery. The testimony of Christ and the Resurrection is that the body and soul are both eternal and of equal value. While in death they may be temporarily separated, their journey and ultimate destiny is with each other. The Resurrection teaches that one’s body matters deeply, just as deeply as one’s psyche, or soul. You are a soul and you are a body. Neither soul nor body make sense without the other. The coherence of the two, understood as the embodied self, is both the starting point and the conclusion of Sandra M. Levy-Achtemeier in her book Flourishing Life: Now and in the Time to Come.

Sandra Levy-Achtemeier, an Episcopalian minister in Richmond, VA is not on her first career. Formerly, she was a well-established Academic, running a major psychology laboratory, and studying human strategies to be happy and flourish, despite deep suffering and loss. In the course of her studies she interviewed multitudes of people, asking them questions about past, present and future and the meaning of their lives. These exchanges inspired her. Eventually she moved out of academia, and into the pastoral vocation.

The book is comprised of two major sections. In the first, we learn the author’s story and certain psychology theories of human development. We learn that there are physical human traits that are shared by all, that there are historical and cultural human experiences that are shared by some, but ultimately, each of us has a story that is unique to us. In the second part, we learn more about the stories of three individuals the author admires and how they exhibited attitudes of being that ultimately yielded their flourishing. Even when faced with suffering and loss, these individuals recast their story and embraced gratitude, hope and joy. These attitudes were embodied and resulted in acts of compassion, wisdom and physical expression, like dance. We learn that the capacity to recast one’s story is enhanced by community. Christianity, with its rich tradition of communal narrative and liturgical practices, like prayer and worship through song and dance, provides context that reinforces practices of embodied self. The book concludes with a final affirmation of scripture on Resurrection, an eternal unity of body and soul, as our destiny.

At the root of Levy-Achtemeier’s theory of flourishing is the power of story. It is in story that we locate our identity, our sense of self and purpose. Story motivates us. But our identity, our story, makes little sense, has no coherence, without Body. Flourishing Life makes the case for the significant benefits to adopting the view of the embodied self. Embracing coherence serves to strengthen one’s psychic health and correct destructive behaviors. It facilitates adaptation to life’s hardships and engaging in communal reflective practices. The view of embodied self results in the ever-increasing transcendence of self. It is the best way we have to keep pushing onward and upward. Without it, we risk becoming static, frustrated and falling into despair.

The question of the relationship of the self to the body is ancient and foundational to an understanding of what it means to be human. As I noted in the beginning, Christianity offers a definite view about the worth of the body, which Flourishing Life affirms. But the Bible offers little insight as to the precise nature of the relationship of the psyche to the body. This is to say that there is significant room for discussion within Christian orthodoxy over this relationship. For all the things worthy of affirmation in Flourishing Life, the book ultimately left this reviewer frustrated at what can only be described as the mixed messages sent by Levy-Achtemeier’s views.

To support her view of the embodied self, Levy-Achtemeier clearly draws from two wells. She draws from the ancient wisdom of Christianity. At the same time she draws on psychological development theories and theories of the mind which clearly derive from evolutionary neuroscience. She sees Consciousness or Mind as a historical product of the physical body, of the brain. To explain their relationship she offers an analogy of Elephant and Rider. The Elephant represents Body. It is massive, powerful, but ultimately dumb. In contrast, the Rider represents Consciousness or Mind. It is intelligent and willful, but it needs the Elephant to move about and accomplish its ends. The author relies very heavily on this analogy, and I presume it is designed to afford dignity to Body. The Rider has an Elephant and vice versa. The Rider depends on, needs, its Elephant. Elephant and Rider must learn to act as one; they must coordinate their movements. But ultimately flourishing requires the Rider learning strategies to cope with the Elephant and its failings. The best way for the Rider to do this is to incorporate the Elephant more fully into the Rider’s story. The Rider must possess, or have, the Elephant. Thus, Flourishing Life can be best understood as simply an instruction manual, for what, in essence, is just a very smart, pragmatic way of surviving and getting the most out of living.

But ultimately, the idea of learning to become a better Rider by making peace with my Elephant fails to resonate with me. Indeed, it is strongly dissatisfying. Elephant/Body is a beast, and a stubborn one at that! Viewing myself as a saddled Rider causes me to resent Elephant/Body, and for me to imagine that I would be happier without it. If I could only just get to the point where I don’t need Elephant anymore! Now, we might say this is an impossibility. But if I embrace the theory that mind emerged historically out of brain, then what reason do I have to doubt that mind might one day transcend body altogether? I can see no way out of this reasoning, nor why I shouldn’t hope for it! It seems that the physical and psychological theories in which Levy-Achtemeier finds strong evidence of the congruency of the body and soul, I find strong evidence for their ultimate discord and animosity, for it would seem that the arch of history is for mind to transcend, to move beyond, to surpass, body. In this view, Death is a welcome release from the suffering of life, transmitted to mind via body. Given, why should I hope for Resurrection, for reunion, with Body? While I affirm the practices Levy-Achtemeier promotes, I question whether the foundation she has built them on will support those in the face of true hardship, of the destructive force of evil. Ironically, Levy-Achtemeier admits that other Christians, such as N.T. Wright, voice similar concerns. If the purpose of the book was to provide comfort and assurance in the Christian view of the mind/body relationship, then it falls short. The internal conflict presented in the pages is waived aside by the author as insignificant, but it presses itself upon this reviewer, causing frustration.

At the heart of Christianity is the truth that Christ did more than demonstrate a way of being. He is more than our prophetic teacher. He is the firstborn of a new creation. Body and soul, we are his and in him we have abundant life. This mystery had depths that many have swum, and Sandra Levy-Achtemeier more than wades into the water. The baggage Flourishing Life carries, however, causes me to question how long it can float.