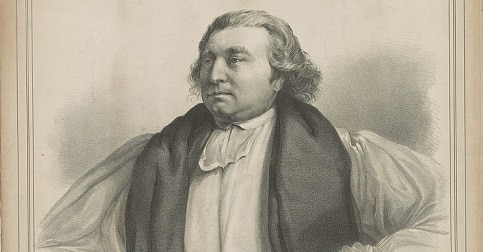 TODAY (Nov. 14) is the Feast Day (in the Anglican Communion) of Samuel Seabury.

Samuel Seabury (November 30, 1729 – February 25, 1796) was the first American Episcopal bishop, the second Presiding Bishop of the Episcopal Church in the United States of America, and the first Bishop of Connecticut. He was a leading Loyalist in New York City during the American Revolution and a known rival of Alexander Hamilton.
(via Wikipedia)

In honor of the occasion, we re-publish Seabury’s incisive tract, An Earnest Persuasive to Frequent Communion.

An Earnest Persuasive
to Frequent Communion

Addressed to those Professors of the
Church of England,
in Connecticut,
who neglect that
HOLY ORDINANCE.

The title has informed you, that my design is to address you on the subject of frequent Communion in the Holy Eucharist, or Sacrament of the Body and Blood of Christ, commonly called, The Lord’s-Supper. The subject is an important one, and claims your serious attention: And the great neglect of the duty requires plainness of speech, and freedom of admonition on my part. I have, therefore, to request, that you will carefully read and consider what is here addressed to you: and bear patiently that plain dealing which proceeds only from a desire to stir you up to the practice of a duty which I suppose an indispensable one, and in the neglect of which you live in a constant state of sin against your God.

“Sin” said the apostle, “is the transgression of the law.” The will of God, when made known to us, is His law to us, and binds us in all cases whatsoever. Nothing is sinful any further than it is contrary to God’s will; and everything is sinful in the same degree that it is contrary to His will: For to contradict the will of God constitutes the nature and essence of sin.

The will of God is made known to us by Revelation, and is declared in the Holy Bible, which is intended by God to be the standard of our faith and practice, that we may know at all times what He requires us to believe and do.

Some of God’s commands are prohibitory, i. e. they forbid us to do certain things because they are contrary to His will: And they are contrary to His will, because, as far as we can judge, they are destructive of our own happiness, and of the happiness of others. Other commands are positive, requiring us to do certain things in obedience to God. In many instances we can perceive that what God commands is conducive to our welfare, and to the welfare of others, and reason will teach us to believe, all God’s commands proceed from the same benevolent principle,–a desire of doing us good–though our blindness may not perceive it.

However, The essence of all sin consisting in acting contrary to the will of God, there must be the same sin and danger in neglecting to do what God commands, as in doing what He forbids. In either case we transgress the will or law of God, and commit sin: And, whether it be by wilfully doing what God has forbidden, or wilfully omitting what He has commanded, we equally transgress His law, and are equally guilty in His sight.

That Christ declared the will of God, and that whatever He commanded is the command or law of God, must be owned by all who acknowledge His Divinity–indeed by all who acknowledge He acted by divine authority. Now, He gave no command more positive than the one relating to the Holy Ordinance of which I am treating. The institution is as solemn as it possibly can be, and was made at the commencement of the most solemn period of His ministry on earth. The injunction on His Apostles to do as He had done, and thereby keep up the memorial He appointed, is as absolute as any command that ever was given.

From the account the Holy Evangelists have left us, the universal and perpetual obligation of this command is very apparent. It is true, it does not appear there were any persons present at the institution, besides the Apostles, but this will furnish no argument against the universal obligation all Christians are under to comply with it. They are all as much interested in it as the Apostles were. Christ died equally for us, and for all Christians, as He did for the Apostles. We, therefore, and all Christians are as much obliged to regard the institution as the Apostles were. Nothing in the institution peculiarly related to them, except the power of administration. By the command, “Do this in remembrance of Me;” they were empowered and obliged to administer the Holy Ordinance: And consequently Christians were obliged to receive it; for unless they did receive it, the Apostles could not administer it.

That the Apostles were, by our Saviour’s command, obliged to this administration, appears from the institution compared with the command. For the command, “This do in remembrance of Me,” relates not barely to eating bread & drinking wine in remembrance of Christ, as the Socinians teach, and some ill-informed Christians suppose, but to the whole transaction. By it the Apostles were enjoined, when they administered the Holy Communion, to do as Christ then did–take bread and break it, and offer it up to God, by thanksgiving and prayer, consecrating it to be His mystical Body –the memorial or representative of that Body which Christ in the institution willingly offered up and devoted to God, a sacrifice and propitiation for the sin of the world; and which, in consequence of His offering, was soon after slain upon the cross for our redemption–the Body of Christ in virtue and efficacy. They were then to distribute it to the Christians who attended the Holy solemnity, as Christ distributed it to them. Likewise they were to take the cup, and offer it up to God, by prayer, thanksgiving, and blessing, consecrating it to be the sacramental Blood of Christ–the representative, or memorial of His Blood which Christ devoted to God to be shed for sin–the Blood of Christ in virtue and efficacy to all worthy receivers. They were then to give it to all the Christians present to drink of it in remembrance, or for a memorial of Christ. So that all they who received the sacramental Body and Blood–i. e. the bread and wine thus blessed and consecrated by Christ’s authorized minister–with true penitence and faith, might, at the same time, receive, in a spiritual and mysterious manner, the life-giving Body and Blood of Christ, i. e. all the benefits of His passion, death, and resurrection.

As it appears that the very institution of the Holy Eucharist laid an obligation upon the Apostles to administer, and upon all Christians of their time to communicate with them in the celebration of it; so a little reflection will convince us, that the same obligation lay upon their successors, the Bishops of the Christian Church, and upon all duly authorized by them, and upon all Christians of every period, from their days to ours, to make the same holy memorial of His blessed Body and Blood which Christ commanded. The command of Christ, ” This do in remembrance of Me,” has no limit of time annexed to it. It must therefore continue in force till He who gave shall repeal it. We are as much interested in the sacrifice of Christ’s death, and therefore as much obliged to commemorate it as the first Christians were. We need the benefits of His redemption as much as they did. It must, therefore, be as much our duty to commemorate His sacrifice for sin, in the way He appointed, as it was theirs–that receiving His blessed Body and Blood in the Holy Communion, we may be made partakers of all the benefits of His death. Was there any doubt of this matter the authority of St. Paul would fully remove it.–” As oft as ye eat this Bread and drink this cup, ye do shew the Lord’s death till He come.”–Ye do represent, set forth, exhibit the Lord’s death till He come at the end of the world to judge the quick and the dead–according to His most true promise to His Apostles–“If I go and prepare a place for you, I will come again and receive you to Myself.”

In this sense the early Christians understood their Lord’s command. And so strong a sense had they of their duty to commemorate their Redeemer’s love in dying for them, that they never assembled for divine worship but the Holy Eucharist made a principal part of the solemnity: Nor was it till the love of Christians abated, and their faith declined, that the memorial of Christ’s death came to be celebrated only on particular occasions.