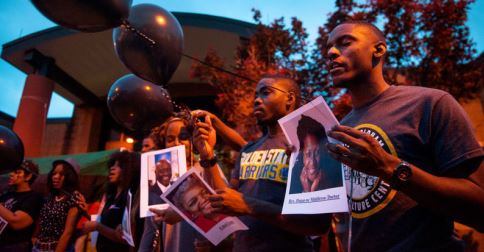 One of this week’s best new releases is:

This book captures a lengthy Twitter conversation, in the wake of the Charleston shootings, about essential readings on racism and racial violence.

Included below are some of the readings that are excerpted in this new book. The book is divided into six sections and we offer at least one reading from each section.

Also of interest…
Our God is Too White?
Diversifying our Theological Reading

Excerpt from Life of a Slave Girl
Harriet Jacobs.

Free Ebook of
LIFE OF A SLAVE GIRL
DOWNLOAD NOW

During the first years of my service in Dr. Flint’s family, I was
accustomed to share some indulgences with the children of my mistress.
Though this seemed to me no more than right, I was grateful for it, and
tried to merit the kindness by the faithful discharge of my duties. But I
now entered on my fifteenth year–a sad epoch in the life of a slave girl.
My master began to whisper foul words in my ear. Young as I was, I could
not remain ignorant of their import. I tried to treat them with
indifference or contempt. The master’s age, my extreme youth, and the fear
that his conduct would be reported to my grandmother, made him bear this
treatment for many months. He was a crafty man, and resorted to many means
to accomplish his purposes. Sometimes he had stormy, terrific ways, that
made his victims tremble; sometimes he assumed a gentleness that he thought
must surely subdue. Of the two, I preferred his stormy moods, although they
left me trembling. He tried his utmost to corrupt the pure principles my
grandmother had instilled. He peopled my young mind with unclean images,
such as only a vile monster could think of. I turned from him with disgust
and hatred. But he was my master. I was compelled to live under the same
roof with him–where I saw a man forty years my senior daily violating the
most sacred commandments of nature. He told me I was his property; that I
must be subject to his will in all things. My soul revolted against the
mean tyranny. But where could I turn for protection? No matter whether the
slave girl be as black as ebony or as fair as her mistress. In either case,
there is no shadow of law to protect her from insult, from violence, or
even from death; all these are inflicted by fiends who bear the shape of
men. The mistress, who ought to protect the helpless victim, has no other
feelings towards her but those of jealousy and rage. The degradation, the
wrongs, the vices, that grow out of slavery, are more than I can describe.
They are greater than you would willingly believe. Surely, if you credited
one half the truths that are told you concerning the helpless millions
suffering in this cruel bondage, you at the north would not help to tighten
the yoke. You surely would refuse to do for the master, on your own soil,
the mean and cruel work which trained bloodhounds and the lowest class of
whites do for him at the south.

Every where the years bring to all enough of sin and sorrow; but in slavery
the very dawn of life is darkened by these shadows. Even the little child,
who is accustomed to wait on her mistress and her children, will learn,
before she is twelve years old, why it is that her mistress hates such and
such a one among the slaves. Perhaps the child’s own mother is among those
hated ones. She listens to violent outbreaks of jealous passion, and cannot
help understanding what is the cause. She will become prematurely knowing
in evil things. Soon she will learn to tremble when she hears her master’s
footfall. She will be compelled to realize that she is no longer a child.
If God has bestowed beauty upon her, it will prove her greatest curse. That
which commands admiration in the white woman only hastens the degradation
of the female slave. I know that some are too much brutalized by slavery to
feel the humiliation of their position; but many slaves feel it most
acutely, and shrink from the memory of it. I cannot tell how much I
suffered in the presence of these wrongs, nor how I am still pained by the
retrospect. My master met me at every turn, reminding me that I belonged to
him, and swearing by heaven and earth that he would compel me to submit to
him. If I went out for a breath of fresh air, after a day of unwearied
toil, his footsteps dogged me. If I knelt by my mother’s grave, his dark
shadow fell on me even there. The light heart which nature had given me
became heavy with sad forebodings. The other slaves in my master’s house
noticed the change. Many of them pitied me; but none dared to ask the
cause. They had no need to inquire. They knew too well the guilty practices
under that roof; and they were aware that to speak of them was an offence
that never went unpunished.

Free Ebook of
LIFE OF A SLAVE GIRL
DOWNLOAD NOW