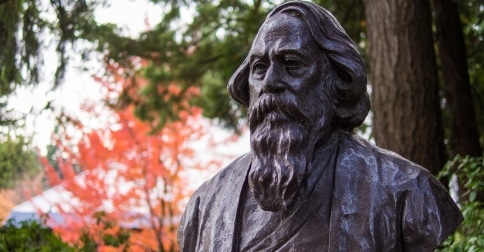 Rabindranath Tagore was a Bengali poet, and the first non-European to win the Nobel Prize in literature (1913)…

Today (August 7) marks the anniversary of his death in 1941

We offer this timely and provocative essay on the nation-state,
which is excerpted from his 1917 book NATIONALISM
(Available as a FREE ebook [easyazon_link identifier=”B00AQMPV1K” locale=”US” tag=”douloschristo-20″]for Kindle[/easyazon_link]
or in a variety of file formats from Project Gutenberg.)

Against the Nation-State
Rabindranath Tagore
(1917)

We delude ourselves into thinking that humanity in the modern days is more to the front than ever before. The reason of this self-delusion is because man is served with the necessaries of life in greater profusion, and his physical ills are being alleviated with more efficacy. But the chief part of this is done, not by moral sacrifice, but by intellectual power. In quantity it is great, but it springs from the surface and spreads over the surface. Knowledge and efficiency are powerful in their outward effect, but they are the servants of man, not the man himself. Their service is like the service in a hotel, where it is elaborate, but the host is absent; it is more convenient than hospitable.

Therefore we must not forget that the scientific organizations vastly spreading in all directions are strengthening our power, but not our humanity. With the growth of power the cult of the self-worship of the Nation grows in ascendancy; and the individual willingly allows the Nation to take donkey-rides upon his back; and there happens the anomaly which must have such disastrous effects, that the individual worships with all sacrifices a god which is morally much inferior to himself. This could never have been possible if the god had been as real as the individual.

Let me give an illustration of this in point. In some parts of India it has been enjoined as an act of great piety for a widow to go without food and water on a particular day every fortnight. This often leads to cruelty, unmeaning and inhuman. And yet men are not by nature cruel to such a degree. But this piety being a mere unreal abstraction completely deadens the moral sense of the individual, just as the man, who would not hurt an animal unnecessarily, would cause horrible suffering to a large number of innocent creatures when he drugs his feelings with the abstract idea of “sport.” Because these ideas are the creations of our intellect, because they are logical classifications, therefore they can so easily hide in their mist the personal man.

And the idea of the Nation is one of the most powerful anæsthetics that man has invented. Under the influence of its fumes the whole people can carry out its systematic programme of the most virulent self-seeking without being in the least aware of its moral perversion,–in fact feeling dangerously resentful if it is pointed out.

But can this go on indefinitely? continually producing barrenness of moral insensibility upon a large tract of our living nature? Can it escape its nemesis for ever? Has this giant power of mechanical organization no limit in this world against which it may shatter itself all the more completely because of its terrible strength and velocity? Do you believe that evil can be permanently kept in check by competition with evil, and that conference of prudence can keep the devil chained in its makeshift cage of mutual agreement?

This European war of Nations (Editor’s Note: WWI) is the war of retribution. Man, the person, must protest for his very life against the heaping up of things where there should be the heart, and systems and policies where there should flow living human relationship. The time has come when, for the sake of the whole outraged world, Europe should fully know in her own person the terrible absurdity of the thing called the Nation.

The Nation has thriven long upon mutilated humanity. Men, the fairest creations of God, came out of the National manufactory in huge numbers as war-making and money-making puppets, ludicrously vain of their pitiful perfection of mechanism. Human society grew more and more into a marionette show of politicians, soldiers, manufacturers and bureaucrats, pulled by wire arrangements of wonderful efficiency.

But the apotheosis of selfishness can never make its interminable breed of hatred and greed, fear and hypocrisy, suspicion and tyranny, an end in themselves. These monsters grow into huge shapes but never into harmony. And this Nation may grow on to an unimaginable corpulence, not of a living body, but of steel and steam and office buildings, till its deformity can contain no longer its ugly voluminousness,–till it begins to crack and gape, breathe gas and fire in gasps, and its death-rattles sound in cannon roars. In this war the death-throes of the Nation have commenced. Suddenly, all its mechanism going mad, it has begun the dance f the Furies, shattering its own limbs, scattering them into the dust. It is the fifth act of the tragedy of the unreal.

Those who have any faith in Man cannot but fervently hope that the tyranny of the Nation will not be restored to all its former teeth and claws, to its far-reaching iron arms and its immense inner cavity, all stomach and no heart; that man will have his new birth, in the freedom of his individuality, from the enveloping vagueness of abstraction.

The veil has been raised, and in this frightful war the West has stood face to face with her own creation, to which she had offered her soul. She must know what it truly is.

She had never let herself suspect what slow decay and decomposition were secretly going on in her moral nature, which often broke out in doctrines of scepticism, but still oftener and in still more dangerously subtle manner showed itself in her unconsciousness of the mutilation and insult that she had been inflicting upon a vast part of the world. Now she must know the truth nearer home.

And then there will come from her own children those who will break themselves free from the slavery of this illusion, this perversion of brotherhood founded upon self-seeking, those who will own themselves as God’s children and as no bond-slaves of machinery, which turns souls into commodities and life into compartments, which, with its iron claws, scratches out the heart of the world and knows not what it has done.

And we of no nations of the world, whose heads have been bowed to the dust, will know that this dust is more sacred than the bricks which build the pride of power. For this dust is fertile of life, and of beauty and worship. We shall thank God that we were made to wait in silence through the night of despair, had to bear the insult of the proud and the strong man’s burden, yet all through it, though our hearts quaked with doubt and fear, never could we blindly believe in the salvation which machinery offered to man, but we held fast to our trust in God and the truth of the human soul. And we can still cherish the hope that, when power becomes ashamed to occupy its throne and is ready to make way for love, when the morning comes for cleansing the blood-stained steps of the Nation along the highroad of humanity, we shall be called upon to bring our own vessel of sacred water–the water of worship–to sweeten the history of man into purity, and with its sprinkling make the trampled dust of the centuries blessed with fruitfulness.

I am not against one nation in particular, but against the general idea of all nations. What is the Nation?

It is the aspect of a whole people as an organized power. This organization incessantly keeps up the insistence of the population on becoming strong and efficient. But this strenuous effort after strength and efficiency drains man’s energy from his higher nature where he is self-sacrificing and creative. For thereby man’s power of sacrifice is diverted from his ultimate object, which is moral, to the maintenance of this organization, which is mechanical. Yet in this he feels all the satisfaction of moral exaltation and therefore becomes supremely dangerous to humanity. He feels relieved of the urging of his conscience when he can transfer his responsibility to this machine which is the creation of his intellect and not of his complete moral personality. By this device the people which loves freedom perpetuates slavery in a large portion of the world with the comfortable feeling of pride of having done its duty; men who are naturally just can be cruelly unjust both in their act and their thought, accompanied by a feeling that they are helping the world to receive its deserts; men who are honest can blindly go on robbing others of their human rights for self-aggrandizement, all the while abusing the deprived for not deserving better treatment. We have seen in our everyday life even small organizations of business and profession produce callousness of feeling in men who are not naturally bad, and we can well imagine what a moral havoc it is causing in a world where whole peoples are furiously organizing themselves for gaining wealth and power.

Nationalism is a great menace. It is the particular thing which for years has been at the bottom of India’s troubles. And inasmuch as we have been ruled and dominated by a nation that is strictly political in its attitude, we have tried to develop within ourselves, despite our inheritance from the past, a belief in our eventual political destiny.