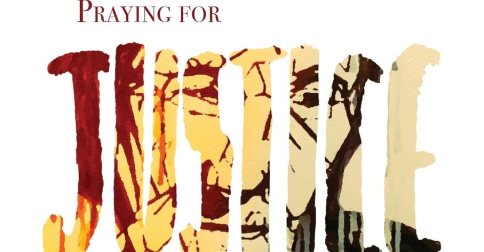 This extraordinary new book guides through daily prayer for the marginalized in U.S. society (and the world) through all four years of the Trump presidency…

Praying for Justice: A Lectionary of Christian Concern
Anderson Campbell and Steve Sherwood

“It’s easy to look at the campaign rhetoric during the previous eighteen months and conclude that the next four years are going to be profoundly difficult for the vulnerable in our society. The reality is that, for them, every year is difficult. Most of the Founding Fathers were slaveholders. Franklin Delano Roosevelt interred more than one hundred thousand Japanese American citizens. Liberal and conservative presidents led a country that for decades allowed Jim Crow laws to remain in place and denied women the right to vote. John Fitzgerald “Jack” Kennedy dragged his feet on civil rights reform. Ronald Reagan’s policies on mental health led to an explosion in the number of homeless in our country. Bill Clinton ushered in the mass incarceration of young African Americans. Barack Obama has deported more undocumented immigrants than any president before him. If one is convinced, as we are, that God’s heart is uniquely for those without power, without recourse to justice, then there has never been a time in our nation’s history when the powers that be have been in alignment with this passion of God’s.”

My endorsement for this book:

Although many Christians in the United States — across the political spectrum — are deeply concerned by the prospect of a Donald Trump presidency, it is not entirely clear how we should faithfully respond. In Praying for Justice, we find a modest proposal for a way forward. By praying for the justice God intends for those on the margins of society, our hearts, minds, and bodies will be oriented toward faithful action in the way of Jesus. I, for one, look forward to praying these prayers daily over the next four years!
– C. Christopher Smith, founding editor of The Englewood Review of Books and co-author of Slow Church.

As a sample…
Here are the first three weeks of this lectionary:


Friday, January 20 – Inauguration Day
Vindicate me, my God, and plead my cause against an unfaithful nation. Rescue me from those who are deceitful and wicked. Psalm 43:1 (NIV)

Saturday, January 21
Rise up, Lord, confront them, bring them down; with your sword rescue me from the wicked. Psalm 17:13 (NIV)

There can be no love apart from suffering. Love demands that we expose ourselves at our most vulnerable point by keeping the heart open.
– Howard Thurman,  Mysticism and the Experience of Love (21)


Sunday, January 22
For You save an afflicted people, but haughty eyes You abase. Psalm 18:27 (NASB)

Wednesday, January 25
You have wearied the Lord with your words. Yet you say, “How have we wearied [the Lord]?” By saying, “All who do evil are good in the sight of the Lord, and [the Lord] delights in them.” Or by asking, “Where is the God of justice?” Malachi 2:17 (NRSV)

Thursday, January 26
Oppressing the poor in order to enrich oneself, and giving to the rich, will lead only to loss. Proverbs 22:16 (NRSV)

Saturday, January 28
Each of us must please our neighbor for the good purpose of building up the neighbor. Romans 15:2 (NRSV)

Love makes it necessary to find the way of truth, understanding, justice and peace. My kind of religion is a very active, highly political, often controversial, and sometimes very dangerous form of engagement in active nonviolence for the transformation of our world.
– Jean Zaru,  Occupied with Nonviolence: A Palestinian Woman Speaks (7)


Sunday, January 29
Moreover, Absalom would say, “Oh that one would appoint me judge in the land, then every[one] who has any suit or cause could come to me and I would give [them] justice.” 2 Samuel 15:4 (NASB)

Monday, January 30
If then you have not been faithful with the dishonest wealth, who will entrust to you the true riches? Luke 16:11 (NRSV)

Wednesday, February 1
When the wicked are in authority, transgression increases, but the righteous will look upon their downfall. Proverbs 29:16 (NRSV)

Thursday, February 2
The Lord is far from the wicked, but [God] hears the prayer of the righteous. Proverbs 15:29 (NRSV)

Friday, February 3
It is better to be of a lowly spirit among the poor than to divide the spoil with the proud. Proverbs 16:19 (NRSV)