Exploring the Spirituality of Toni Morrison

Nadra Nittle’s Toni Morrison’s Spiritual Vision: Faith, Folktales, and Feminism in her Life and Literature is the first book to consider the place of spirituality in Morrison’s work. On the one hand, this fact is surprising, given how many people have read, discussed, and written about her novels. On the other hand, Morrison’s work is so rich that critics can be forgiven for directing their attention first to America’s fraught history of race and racism, slavery, gender relations, and prose style. Still, this book is long overdue.

An engaged Roman Catholic for much of her life, Morrison is not the kind of Catholic writer that Flannery O’Connor is, where every tree and tattoo and stain on the ceiling has symbolic value. Nor is she the kind of Catholic writer that Graham Greene or Brian Moore are, whose work features priests, visions, sacraments, and the overtly theological discussions that emerge within their plot lines. Nevertheless, Morrison’s novels are deeply grounded in spirituality, as they ask complex questions about right and wrong and the nature of community. Morrison’s Christianity, as Nittle states, “is entangled with African folklore and mythology; unorthodox preaching based on biblical principles and community mores; and women’s healing, power, and intuition. Her books engage religious syncretism…” (9).

The first three chapters of Toni Morrison’s Spiritual Vision provide introductory material, focusing as much on theological explanations and Morrison’s biography as on the fiction itself. I found these chapters to be the most difficult to follow—not because the sentences or paragraphs were particularly difficult but because I couldn’t see an argument developing. On a few occasions here, Nittle devotes significant space to material that seems tangential, e.g. data regarding the transmission and death rates of tuberculosis patients, that, while interesting, isn’t clearly enough related to the book’s main purpose. Nittle is trying to accomplish a lot in these first three chapters, situating Morrison and her work within several spiritual traditions, within a particular historical context, and within a particular literary context. She does reference some of the fiction here, especially The Bluest Eye. These chapters would have benefitted from a slower pace and more expansive approach, where connections among the various topics could have been established more fully.

The remaining chapters, however, provide interesting and significant analyses of several of Morrison’s novels. Chapter four, “Sula’s Destruction of the Madonna, the Whore, and the Witch,” explores multiple dualities in Morrison’s second novel. “It uses the friendship between Sula Peace and Nel Wright,” Nittle says, “to examine morality and its role in both the community and the individual, making it one of Morrison’s most religious texts” (81). As the chapter title indicates, the primary duality that drives Sula is the virgin/whore stereotype—any individual woman being one or the other with no space in between for authentic expressions of sexuality. Nittle links the virgin/whore binary understanding to the Jezebel/mammy distinction that white people have sometimes historically used to understand black women. While the stereotypical definition of a Jezebel exceeds that of a whore, and while a mammy is not synonymous with a virgin, the existence of both pairs suggests how difficult it is for a woman, especially a black woman, to escape rigid categorization by others. The idea of the witch is slightly different in that it is not unequivocally linked to sexuality and illustrates a potentially fearsome power available to women, even if that power is classified as evil.

Chapter five, “The Folklore and Holy Women of Song of Solomon and Beloved, pairs Morrison’s third novel, published in 1977, with the one published a decade later that garnered her international attention and that remains her most influential. Nittle connects the two primarily through their use of folklore. In Song of Solomon, this lore circulates around a belief that Africans can fly, and that ancestors of contemporary African Americans escaped the middle passage and enslavement in the United States by flying back home. Discussing Beloved, Nittle mentions the historic Margaret Garner, an enslaved woman who kiledl her child and has been cited in much of the literary criticism on Beloved, but Nittle contextualizes this story also within another legend, that of “spirit children” (126) who return from the dead and disturb their parents. The plots of both of these novels are founded in trauma, and Nittle argues that folklore along with some other factors helps to ease some of the characters’ traumatic wounds.

Chapter six, “Paradise’s Black Madonna and Afro-Catholicism,” could seem at first glance to be a return to the virgin/whore dichotomy if one identifies “Madonna” as a synonym for “virgin,” but Nittle follows a different trajectory here. Morrison herself considered Paradise as among her most explicitly religious novels. Nittle explains that “In her work, biblical allusions reflect the Scripture-laden speech of real-life Black Americans, who passed down Old Testament stories just as they did folklore about flying Africans. Historically, having only the church as a refuge from an outside world bent on degrading and destroying them, Black Americans have always identified with biblical figures, especially those who suffered injustice and ill treatment” (145-46). The daily presence of the Bible in many African American lives explains the frequent biblical allusions in Paradise. Toward the end of this chapter, Nittle analyzes characters according to the virgin/whore binary, but she does so specifically to interrogate the relationship between the two identities rather than to reinforce conventional ideas.

Nittle’s final chapter, “A Literary Legacy of Resilience,” begins with a brief analysis of God Help the Child, the last novel Morrison published before her death in 2019, but it quickly unifies the book through references to each of the other novels that have been discussed. Toni Morrison’s Spiritual Vision is remarkably accessible, especially given some of the literary and theological material it examines. It is not weighted with much scholarly apparatus, though the book does include notes for readers who want to explore further. Nearly all readers engaged with Morrison’s work will find something new here. Nittle’s insights will stimulate specialists as well as recreational readers. 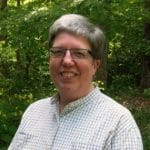 Lynn Domina is the author of several books, including two collections of poetry, Corporal Works and Framed in Silence, and most recently Devotions from HERstory: 31 Days with Women of Faith. She is also the editor of a collection of essays, Poets on the Psalms. Find her online at: www.lynndomina.com