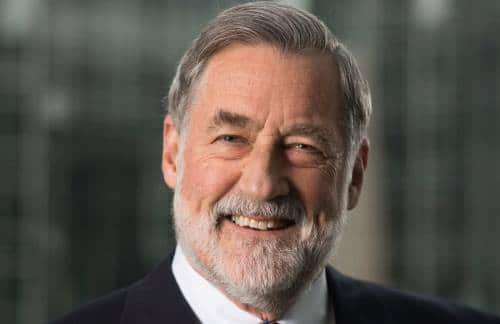 Slow Down and Be Kind

An Interview with Maxwell King
Author of
The Good Neighbor:
The Life and Work of Fred Rogers

[Editor’s Note: This interview about Fred Rogers with Maxwell King initially ran in our Advent 2018 magazine issue, but we are excited to re-publish it here in honor of the new paperback edition of the book and the soon-to-be-released movie about Fred Rogers, A Beautiful Day in the Neighborhood (starring Tom Hanks).]

Maxwell King is the author of the bestselling new biography The Good Neighbor: The Life and Work of Fred Rogers. A former journalist, King was the editor of the Philadelphia Inquirer from 1990 to 1998. He went on to serve as president of the Pittsburgh-based Heinz Endowments, as well as the director of the Fred Rogers Center at Saint Vincent College in Latrobe, Pennsylvania. He is currently the President and CEO of The Pittsburgh Foundation. King is also featured in the wonderful 2018 documentary Won’t You Be My Neighbor?

John Pattison: I’ve noticed something as I’ve been re-watching Mister Rogers’ Neighborhood with my daughters. I’ve noticed that, when Mister Rogers has a guest on his show who is a musician, a dancer, or some kind of artist, he asks some version of the question: “Did you like to play music as a child?” Or, “Did you like to dance when you were a child?” The guests almost always say they did. In a moment, we’ll get into how that played out in Fred Rogers’s own life, but I’m curious about you as a longtime journalist and now the author of this biography: did you always love to write?

Maxwell King: I started as a reader. My mother loved books. She was always reading two or three books. She would make books available to her children and would talk about which books she thought we might be interested in. So, we as children were constantly reading too. Her father was Maxwell Perkins, the editor at Scribner’s.

MK: Yes, of course he edited Hemingway and Wolfe and Fitzgerald. My mother came from that background. She loved books and taught her children to love books.

For a long time, I was just a reader. Then when I got into college and studied English literature, I began to write. I wrote a lot of poetry, and dabbled around with fiction. Then I did a little bit of journalism and enjoyed the journalistic form very, very much. I kept on writing poetry but journalism became my métier.

JP: I was surprised it took so long for a biography to be written of Rogers. How did you come to be the one to write it?

MK: Fred Rogers, all through his life, didn’t want a biography to be done. He refused overtures from at least half a dozen biographers. In my case, I had been running another foundation here in Pittsburgh called the Heinz Endowments. I retired, obviously too early, because I didn’t like retirement. I was looking for something to do. Rogers left his professional legacy to Saint Vincent College in Latrobe, Pennsylvania, the town where he grew up. They established the Fred Rogers Center for Early Learning and Children’s Media. They had a building but not a lot else going on. I said I would help them raise money and start programs and get the Center in motion.

During that time, I asked Joanne Rogers, Fred’s widow, and the president of Saint Vincent College, why there wasn’t a biography. They said, “Oh, Fred didn’t want one.” And I said, “Well, with all due respect, Fred is gone and you’re asking me to help you raise millions of dollars to get the Center going. We need a biography.” Finally, after a couple meetings on that topic, Joanne said, “Okay, you’re right. You write it.”

I didn’t fully appreciate how much work it was going to be, but I said yes, and I’m glad I did. Because in addition to being proud of the book, spending seven years sort of “marinated” in Fred Rogers’s life has been very good for me.

JP: As you researched Fred Rogers’s own childhood, did you see the seeds of the man who would become “Mister Rogers”? The seeds of creativity were there, but there were also seeds of pain, weren’t there?

MK: Yes. There were two important strains in the evolution of his childhood.

The first was his time in church with his mother and his grandparents. His mother was a very giving person both in personal relationships but also to the community. She volunteered for everything. She helped people who were in trouble. She was a person who was intentionally active in carrying out what she felt were her Christian values and principles. Fred picked up on that at a very young age. He would go to church and sit in the pew with his mother. Sometimes he would ask questions at inopportune moments. But she never shushed him. She never said, “Be quiet, the minister is talking.” She was always responsive to him.

The other strain is his own loneliness, his shyness, and the isolation that came in part from his being a very introverted little boy. And it came in part from his parents being overly protective. His mother was just wonderful and loving and a marvelous person, but she was overprotective of him and the family. The family was wealthy and they had a chauffeur. The chauffeur drove Fred to elementary school, which of course was just setting him up for being an outsider and being picked on by other children.

There’s a pivotal moment you’ll probably remember from the book. Fred was chased down the street by a group of other boys, and he was terrified. He got away to the house of a friend. I think the cathartic moment for him was when his parents and grandparents said, “We’re so sorry that happened to you, Freddie, that’s terrible. But, you know, if you just pretend you don’t care, and show them you don’t care, it’ll be okay. They’ll leave you alone.” As you may recall from the book he went up to his room, and he sat there just talking to himself, saying, “But I do care. I do care.” I think that was a very important moment for him. He began to fashion his own character in a way that all those things about him that were perceived by others as weaknesses — caring too much, being shy, feeling cautious, being very sensitive— he flipped them. He turned his sensitivity and caring nature into a strength.

He seems very simple, gentle, and sweet; some of his friends even described him as androgynous, not masculine in the traditional sense of being aggressive. And yet he became a very strong person. Everybody I talked to who worked with Fred described him as a wonderfully loving and caring friend, but also somebody who was as tough as nails. He knew exactly what he wanted to accomplish, and how he wanted to go about doing it.