America has a problem with racism. If you managed to avoid that knowledge up to this point, I’m not sure how you did it, but you certainly didn’t escape its effects. For the entirety of American history, race has shaped this country—but so too, less discussed but no less prevalent, has religion. Christianity, particularly Protestant Christianity, has formed ideological underpinnings that impact every piece of modern American life.

From the first page of White Christian Privilege, Khyati Joshi makes it plain that she is not interested in euphemizing. Nor is she interested in gently nudging her audience— one comprised at least in part by, if not mostly by, the people whose privilege she is illuminating— into a more aware mindset. Instead, Joshi wastes no time by acknowledging the truth: “Christian, English, free, and White have been superimposed to form mutually supporting advantages [that] stand in the way of fulfilment of the promises of equality that were made in the nations founding documents and more recent laws.”

Professor Joshi details the historic conflation of Whiteness and Christianity and the role that each have played in upholding the other in colonial thought, from the ‘limpieza de sangre’ or ‘purity of blood’ certificates Spanish officials required from those suspected to have Jewish or Muslim ancestors to the pseudoscientific Aryan Invasion Theory, used to justify British conquest of India and swiftly abandoned when Bhagat Singh Thind applied for United States citizenship. At each stage, race and religion play off of each other and reinforce the idea that to be White is to be Christian and to be Christian is to be either White or the recipient of White beneficence.

Upon American Independence, a new category was added: citizenship and patriotism. The notion that patriotism implies Christianity is evident at every public sporting event, in every classroom, and on every dollar bill. The author does not shy away from the implications of one nation ‘under god’ even for those who could nominally claim that their religion is included in such a statement.

The ramifications and continuations of White Christian normativity will become even more apparent in the coming weeks, as Christmas assumes its position as the quintessential American holiday and civic institutions prepare to let employees and students take a break offered automatically for no other religion’s holidays (although Easter break is just around the corner). Professor Joshi speaks to her own childhood as an Indian American Hindu girl in a White Christian society as well as those of others she interviewed when she talks about otherization, disenfranchisement, and discrimination today— whether it takes the form of a class that required going to ‘one another’s churches’ for school credit or the struggle to find a wedding venue that would accommodate a Hindu ceremony.

“Envisioning a more perfect union requires us to change the entire framework.” Professor Joshi explains in White Christian Privilege, or perhaps she warns us. It is not enough to ‘allow’ or ‘tolerate’ people of other religions, races, or nationalities. Nor is it enough to claim a veneer of secularism a la the holiday concerts that would, in any other year, begin next week. Instead, we must “replace the very notion of privilege with a fulfilment of the ideals of equality” to begin redeeming the promises integral to the American promise. 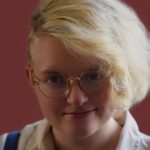 C.M. Wilson (they/them) is a writer, researcher, and voracious reader. Their work has been published in The Selkie, 50 GS Literary Journal, and Wizards in Space. When they aren't writing books or writing about books, they prefer to spend their time playing RPGs and trying to propagate pothos leaves. You can find C.M. on twitter @chthrissa or at wordsplantsskullscrafts.wordpress.com