The Persistence of God.

Sealed: An Unexpected Journey into the Heart of Grace
Katie Langston

So, you’ve come to South Africa to learn about the United States.”

Our group of white American seminary students thought we were on a “cross-cultural experience” to learn about the tumultuous past and present of South Africa, yet the comparisons to our own country’s fraught relationship with race were impossible to miss. That we were technically talking about them, not us, lowered our defensiveness enough to make room for revelations about our own family story.

That is what it feels like for someone at home in a mainline Protestant denomination to read Katie Langston’s book about yearning – obsessively – for grace from God from within Mormonism, and eventually outside of it. But the “outside” part is a very small portion of Sealed. Langston never intended to leave the Mormon church, and only the very end of her memoir is told from outside that tradition. Yet the heavy emphasis on obedience, conformity, and preserving family connections can make this story feel not so cross-cultural for mainline Protestants, after all.

Perhaps the term “theological memoir” would be more fitting here than “spiritual memoir” because it is a visceral, experienced theology around which Langston’s entire story pivots. Key words from the title re-surface as motifs explicitly and implicitly throughout: sealed, journey, grace. Katie Langston is at her core a person filled with The Questions (which she capitalizes, as they are practically a character in her life) about God and her own worthiness. She writes:

“I couldn’t admit that it had never worked for me, so I fell back to my default assumption: I was the problem. My failures were because of me. Again and again, I cycled through stages of burnout, failure, frustration, and self-flagellation, before mustering the strength to start over. The Questions showed no mercy” (133).

To observe the effect of these questions on her in childhood, her teens, young adulthood and early married life is painful but relatable. By the time readers reach Part 3 we have a full enough sense of what is at stake regarding Langston’s mental health, relationships and calling, that we too would be greatly ambivalent if she left Mormonism completely.

One might be in danger of feeling too smug when reading a memoir of someone who converted to the very church body of which one is a member. The Lutherans don’t “win” this round, though. Grace wins – in Langston’s family and in how she relates to where she’s from both geographically and ancestrally. This book is not a take-down of the Mormon faith, although it is hard for the repeated interviews she endures over moral infractions to not appear abusive. That makes this memoir easier to read, in a way, than a scathing critique of Mormonism might be.

Langston is even nuanced and generous about the patriarchal nature of Mormonism. She observes it nearly without judgment, as an insider, until realizing during a Temple ritual that women were never allowed direct contact with Father God. Her parents loved her by immersing her in the Mormon church, but it had a different impact on her life than it did on theirs. She intersperses accounts of her ancestors’ (non-Mormon) religious ties with her own story, wondering about how they have contributed to who she has become, despite the affiliations and loyalties of the older generations she has actually known. Her journey is towards a theology of grace, and she extends that grace even to the system that made her feel so marginalized and lost for many years. As a reader, I wonder: Can I be so gracious?

The persistence of God in the life of this bright, funny, over-functioning actor makes the bizarre trajectory of her life so far, still in early mid-adulthood, nearly make sense. Or maybe it makes the circuitous routes her readers have taken to get to a healthy second marriage, a third career that is finally a good match for our gifts, or a peace in our soul about how we were raised less like a failure and more revelatory of God’s persistence. I think I prefer God’s persistence to God’s plan as an overarching theme for a life anyway. This book is clearly not just for ex-Mormons. 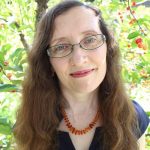 Lee Ann M. Pomrenke is a Lutheran pastor, writer and digital editor of Luther Seminary's The Faith+Leader. She is the author of Embodied: Clergy Women and the Solidarity of a Mothering God (Church Publishing, Inc. 2020)

The Testimony of Justin Martyr ... →