A Life in God’s Grace

Stories of My Life
Katherine Paterson

I laughed out loud and shed some tears while reading renowned children’s writer Katherine Paterson’s Stories of My Life. The author, whose revised memoir coincides with her  90th year, is one of America’s living legends, decreed so by the Library of Congress in 2000. She has won just about every award in children’s literature, sometimes more than once. Several generations of readers are most familiar with her Newbery winners A Bridge to Terabithia (about friendship and death) and Jacob Have I Loved (about sibling jealousy). There exist more than forty books in her literary canon.

It’s tricky writing for family and fans in the same book. Most of the time Paterson satisfies reaching both audiences with humor, wit, and poignant stories, plus providing photos and sharing antecedents for popular books. From her Georgia roots come some unusual tales. For example, there’s the one about when her confederate great uncle’s brass buttons returned to the family after his death at Pickett’s Charge. Paterson draws humorous connections to General Robert E. Lee and his horse Traveller.  She also carves out one well-researched chapter on forgotten missionary Maud Truxton Henderson, who spent years in China saving abandoned baby girls, and joked about being the last person kissed by General Lee.

In early chapters I was occasionally lost in the genealogic woods of a large family via Goetchius/Womeldorf roots. Before there was Katherine Paterson there was Katherine Womeldorf, and the book progresses under those two distinctions. (Useful tip: there’s a family tree and timeline in the back.)

Katherine Womeldorf was born in 1932 to Presbyterian missionary parents in China, the middle child of five. In 1938, the Womeldorf family fled China for the first time, spending a harrowing week to get to the posh Peninsula Hotel, in Hong Kong. The wealthy western tourists snubbed the refugees crowding their hotel. She writes,

“My mother, who was not a bitter woman, could not recall that long day without bitterness…[quoting Mrs. Womeldorf,] “I watched them as they passed by with sneers on their faces and I wanted to cry out to them: ‘Do you think I like being here? Do you think I want my children to be dirty?’” She would shake her head, “They couldn’t even smile at the baby…What kind of person can’t even smile at a baby?” I can never see a picture of refugees in the paper without remembering how it feels” (96).

As refugees, the family evacuated to Virginia, but returned “home” to China in 1939, only to evacuate again in 1940. World War II and Chairman Mao closed China permanently for them. The family settled in Virginia, with Katherine’s father working stateside for the mission board.

Of her entry into public school Paterson writes, “By the time I was five I had been through war and evacuation, but nothing had prepared me for the American public school system” (122). Katherine had a “dragon lady” for a kindergarten teacher and in first grade, a teacher who neglected to take action when Katherine received no Valentine cards. Such formative events aided Katherine later when she created her characters. She recalls 4th grade as her worst year, because of a 7th grade female bully, “I recognize now that some of my best writing has its seed in that awful year, but I can’t remember once saying to my nine-year-old self: ‘Buck up, old girl. Someday you’re going to make a mint out of all this misery’” (126-127).

As an English major at King’s College in Bristol, Tennessee (who did her senior thesis on Gerard Manley Hopkins), Paterson remembers telling an encouraging professor she did not want to put one more “mediocre writer” into the world. Instead, she taught for a while, took missionary training, and in 1957, went to Japan with the assignments of learning the language and assisting eleven Japanese pastors on the island of Shikoku.

After four years, each church gave her a farewell dinner. Paterson quotes host Pastor Iwaii, of Wakimachi, who read Ephesians 2:14,

“ ‘For [Christ] is our peace, who has made us both one, and has broken down the dividing wall of hostility….’ Katherine is young. I am old. She is a woman. I am a man. She is an American. I am Japanese. When she was the child of missionaries in China, I was a colonel in the occupying army in Manchuria. She comes from the Presbyterian tradition. I come from the Pentecostal. The world would think it impossible that she and I should love each other. But Christ has broken down all the barriers that should divide us. We are one in Christ Jesus….’  If only all of us could hear that word. And I don’t believe this oneness is for Christians alone. God loves the whole world. We all belong to one another whatever our belief or non-belief” (204-205).

Paterson, in her late twenties, was bent on returning to Japan after her furlough, but the love and persuasiveness of seminary student John Paterson changed her mind. They had 51 years together, each supporting the other’s vocation. Her chapter on his hospice care and death is a poignant window into love and bittersweet hospice gifts.

Though the Patersons struggled financially, Katherine taught and wrote her first book, a Christian curriculum for fifth and sixth graders in 1966. Who Am I? is still in print. After that book Paterson started taking her writing vocation more seriously, even as she stayed at home caring for four young children (two biological, two adopted).

In sharing these family years, Paterson writes mostly upbeat chapters about pets and the children’s shenanigans. Her husband apparently came home regularly and asked a distracted, writing Katherine, “Where are the children?” She defends herself: “They all survived the benign neglect of their mother…. In my defense, I did two things right. I loved them a lot, and even if I didn’t spend nearly enough time cleaning the house they lived in, I made it up in countless hours of reading aloud” (242-243).

It puzzles me that absent from her stories are pro and con experiences of being a pastor’s wife in the sixties and seventies. Surely, the fishbowl existence of a pastor’s family lends itself to stories. Most telling is how Paterson rewarded herself with early prize money (after treating the family to an amusement park outing): “I gave myself a gift when Bridge won [the Newbery medal]. I decided that we were now rich enough to buy fresh milk. ‘I will never mix another gallon of dried skim milk as long as I live,’ I promised myself, and I haven’t. When Jacob Have I Loved won in 1981, we had just moved to Norfolk and I was homesick for my Washington-area friends. My gift to myself that time was that I could call my friends long-distance whenever I wanted to. I still do that” (292).

After her husband died in 2013, Paterson moved to live near a daughter in Montpelier, Vermont. She declares she’s now retired from writing and enjoys reading, friendships, and telling stories over a meal. Perhaps there will be another book, but perhaps not.

Paterson closes Stories of My Life by quoting the hymn “Come Thou Fount of Every Blessing.” Then she shares, “Some years ago, a literary critic said that the theme that ran through all my books was hope. Yet I believe that grace is the thread that goes through my life, and is, therefore the thread that connects all that I have written. Grace is unmerited favor, and it has poured down on me all the days of my long life” (315-316). 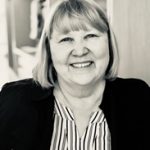 Cynthia Schaible (C.S.) Boyll writes children stories from Colorado Springs and is a member of the Society of Children’s Book Writers and Illustrators. Unexpected Riches, her debut historical adventure novel for young adults, centers around a Puritan midwife kidnapped on the high seas. The book may be ordered through most independent book stores and at Amazon and Barnes & Noble. You can learn more about her work at www.csboyll.com