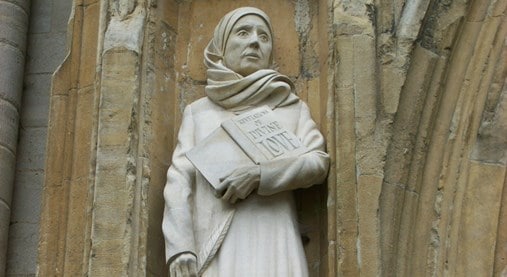 This coming weekend brings the All Saints Day holiday…

This week marks the birthday of St. Julian of Norwich, and this week’s FREE ebook download is her best known book:

Revelations of Divine Love
by Julian of Norwich

Julian of Norwich (1343 – after 1416), also known as Dame Julian or Mother Julian, was an English anchorite of the Middle Ages. She wrote the best known surviving book in the English language written by a mystic, Revelations of Divine Love. The book is the first written in English by a woman. She lived practically her whole life in the English city of Norwich, an important center for commerce that also had a vibrant religious life. During her lifetime, the city suffered the devastating effects of the Black Death of 1348–50; the Peasants’ Revolt, which affected large parts of England in 1381; and the suppression of the Lollards. In 1373, aged thirty and so seriously ill she thought she was on her deathbed, Julian received a series of visions or “shewings” of the Passion of Christ. She recovered from her illness and wrote two versions of her experiences, the earlier one being completed soon after her recovery (however its manuscript clearly states it was written far later, in 1413, and when Julian was still alive), and a much longer version, today known as the Long Text, being written many years later.

For much of her life, Julian lived in permanent seclusion as an anchoress in her cell, which was attached to St Julian’s Church, Norwich. Four wills in which sums were bequeathed to her have survived, and an account by the celebrated mystic Margery Kempe exists, which provides details of the counsel she was given by the anchoress. (via Wikipedia)