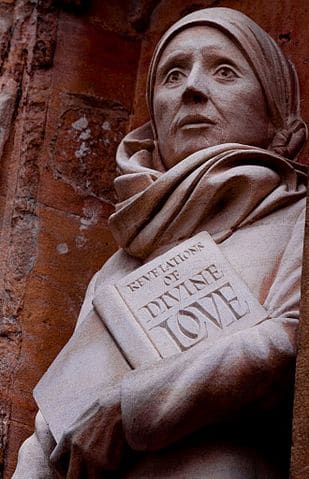 Today is the feast of Julian of Norwich.

Very little is known about Julian’s life. Her personal name is unknown; the name “Julian” simply derives from the fact that her anchoress’s cell was built onto the wall of the church of St Julian in Norwich. Her writings indicate that she was probably born around 1342 and died around 1416. She may have been from a privileged family that lived in Norwich, or nearby. Norwich was at the time the second largest city in England. Plague epidemics were rampant during the 14th century and, according to some scholars, Julian may have become an anchoress whilst still unmarried or, having lost her family in the Plague, as a widow. Becoming an anchoress may have served as a way to quarantine her from the rest of the population. There is scholarly debate as to whether Julian was a nun in a nearby convent or even a laywoman.

When she was 30 and living at home, Julian suffered from a severe illness. Whilst apparently on her deathbed, Julian had a series of intense visions of Jesus Christ, which ended by the time she recovered from her illness on 13 May 1373. Julian wrote about her visions immediately after they had happened (although the text may not have been finished for some years), in a version of the Revelations of Divine Love now known as the Short Text; this narrative of 25 chapters is about 11,000 words long. It is believed to be the earliest surviving book written in the English language by a woman. (via Wikipedia)

“God, of thy goodness, give me Thyself;
for Thou art enough for me,
and I can ask for nothing less
that can be full honor to Thee.
And if I ask anything that is less,
ever Shall I be in want,
for only in Thee have I all.”

“The greatest honor we can give Almighty God is to live gladly because of the knowledge of his love.”

FREE EBook of Julian of Norwich’s
REVELATIONS OF DIVINE LOVE