What makes a good father?

The Intentional Father: A Practical Guide to Raise Sons of Character and Courage
Jon Tyson

What makes a good father? Is it caught or taught? Are there ways to raise sons without either transmitting hopelessly toxic masculinity or providing so little example-setting that it takes years to rebuild identity?

I care about these issues as I find myself the parent of a 9 year old boy and, like all humans, worry about the future. We’ve been fairly intentional in developing a relationship. We even attend a yearly “Mighty Men” retreat at our denomination’s camp; it’s mostly a day of chilly, inexpert archery, eating s’mores, and awkward small talk among dads as the boys tear around. But in addition to the reverie and dodgeball at the retreat, this last time we were all given a book: The Intentional Father: A Practical Guide to Raise Sons of Character and Courage by Jon Tyson, which seemed to be a way forward into a little bit more awesomeness in doing this father-son thing well.

I’ve read Tyson before, but this book looked different: faux cloth with gold printing (not embossing) sort of like a book that would be on a bookshelf that’s part of the Magnolia for Target line. In terms of a book from a men’s retreat, it could have been so much worse. I can imagine getting Every Man’s Battle 20 years ago, or something today from an alt-right figure masquerading as a Christian. So, I was moderately excited. Jon Tyson is the pastor of Church of the City in Hell’s Kitchen and a rising star in the NYC celebrity pastor tables. (He’s not won the league yet, but has placed well in some minor tournaments.) His big book has been Beautiful Resistance in 2020, but I’ve mostly heard of him through the excellent messages he’s preached at Church of the City. My wife, who is also a great preacher (game recognizes game), is a big fan.

Jon attempts something difficult and mostly accomplishes it. It’s like 80% there. He does a lot of freeform modeling of what being a man who’s connected to Christ really looks like without falling into cultural tropes. Like many pastors who are working cross-culturally, he normally has to translate so much out of his natural idiom (He’s an Australian from Adelaide, South Australia)  that he does not readily fall into some of the standard masculine tropes that permeate American culture.

Tyson passionately cares for his son and wants the best for him and it shows. Also, because he had a reasonably good father, he’s not doing this out of a sense of trying to overcompensate, but just to go further into excellence. Tyson and his editors did a good job of breaking down the steps into digestible chunks so that it’s not overwhelming.

I’m convinced that this book could be a good companion for some fathers as a resource but it does have some ways it could be perfected. First, while Tyson writes a lot about his own intentionality (45 minutes in devotions with Nate each morning!) I’m not all that enlightened about what God actually does to help boys grow up into Christ-following men. The stories of father-son relationships from my own acquaintances are much more complex and so many of them succeeded despite having none of the intentionality that Tyson describes. One friend who had nearly no contact with his father growing up in a mobile home park is now a caring Anglican Vicar who teaches classes on effective church development. Another friend who attended seminary alongside his dyslexic son to help him fulfill his calling as a chaplain had a distant, post-WWII factory dad. Our own fathers are imperfect and yet Christ is there for us, guiding us in the Spirit and bringing other men into our lives to more accurately reflect the image of Christ.

Also, in terms of user experience, the book has a strange vibe because Barna research is quoted every few pages but Tyson very rarely refers to it. And the research is pretty anodyne. I know that this sort of Barna partnership is hot right now (i.e., Andy Crouch’s Tech-Wise Family or anything by David Kinnamon), but the pairing doesn’t work in this example. I might now know from a hipster-tuned infographic that 82% of fathers in the survey often feel proud and 12% often feel inadequate (77), but I don’t know from Barna or Tyson what I should do with this information. This lack of germane connections means that the Barna research ends up functioning like the visual clutter of paid ads in an article that you’re reading on your phone; maybe it pays the bills, but it is hardly a reading experience I want more of in my life.

Speaking of the social science component, I see another issue here; Tyson’s run this experiment with a sample size of one son. This seems like a small sample size for a whole book. That’s not to say that the case study method can’t be good (see the work of Bent Flyvberg),  but it would have been more credible if he’d endeavored to test this model with 100 other fathers in his church over a decade of time to add quantitative to qualitative.

And it’s these 100 other fathers I care about– the ones who aren’t famous pastors. I guarantee that the fathers who were on my trip– godly men who don’t cheat at dodgeball– will likely abandon Tyson’s one-size-fits-all method as too frickin’ hard. He spends 45 minutes doing devotions with Nate each day. That might be awesome, or it might be weird. But it is super difficult, especially if you don’t have a massively flexible pastoral job and a nearly non-existent commute.

I’m much more interested in the Effective Christian Father. What behaviors can fathers do on a daily or weekly basis that research shows (Even Barna research!) has a positive effect on raising caring, joyful sons? Or maybe it largely doesn’t matter. Another excellent parenting book, Selfish Reasons to Have More Kids by economist Brian Caplan highlights that the vast majority of the results of your parenting come from nature over nurture, especially in the long run. So statistically, Nate (and Jon) would have come out okay with ⅓ of the obsessive spiritual parenting.

By all means, read Tyson’s book as a memoir of one father’s journey to set up a good relational foundation with his son over a lifetime. But don’t read it like a cookbook and think that your path has to look exactly like his. God (and your genes) are on your side. 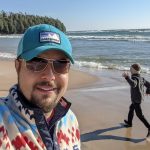 JP Lawrence is a father, soccer coach and permaculture gardener living in Willowbrook, Illinois. His previous work has appeared in Crux and The OE Journal.