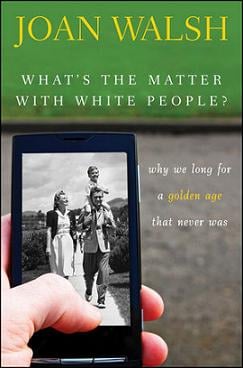 What’s the Matter with White People: Why We Long for a Golden Age that Never Was

The title question of Joan Walsh’s book could be understood very differently depending on whom is doing the asking.  Sarcasm and shock might be the tone coming from a certain kind of white person who believes reverse racism is as much a reality as is the more traditional variety.  Resigned disappointment could be expected from an African-American who has felt again the barb of systematized prejudice.  In Walsh’s case I imagine notes of frustration, confusion, and disappointment.  For Walsh, like me, white people are my people and there seems to be something the matter with us.

“What’s the matter with white people?” is a question that has recently come to my mind with disappointing frequency.  The race of our president has provoked code language and race baiting from those who want to retake “our country.”  Debates about immigration have once again made suspect those whose language, customs, and religion don’t fit the accepted American narrative.  In my city of Chicago one’s race is a far-too-accurate predictor of the likelihood of incarceration, a fact often ignored or explained away by white people like me.

As a question, “What’s the matter with white people?” lacks nuance and is laden with assumptions, but it’s a question that exists for many and I was hopeful the author would have some constructive ways of answering.  Unfortunately Walsh never directly addresses the question.

Walsh is an editor at large of Salon and rather than being an exploration of the problems and contradictions of whiteness her book is more a memoir, a story about coming to grips with history and ethnicity.  Hers is a story of Irish grandparents immigrating to New York, growing up with her parents in Long Island before moving to the Midwest.  This is also a story of partisan American politics: the Walsh’s were a solidly Democrat family until the racial tensions in the 1960’s caused many family members to move to the law and order Republican Party of Richard Nixon.  Much of the book is devoted to Walsh’s exploring and owning her family and ethnic identity even as she remained solidly a liberal democrat.

Her liberal commitments and party affiliation brought Walsh into contact and friendship with many people of color who, like Wash, were working on issues of poverty and justice.  As she describes these experiences the reader glimpses some of America’s racial complexities.  Describing her work with non-white peers in Oakland she writes,

“As the lone white person in a group, I was often privy to unintended insults, and I developed a little bit of a chip on my shoulder.  ‘White’ was an epithet: you could deride ‘white teachers’ or ‘white social workers’ or ‘white foundation executives’ with no other modifier, because white was a universally understood shorthand for clueless, culturally incompetent, and, as often as not, racist.”

These complexities and tensions become even more apparent as Walsh describes the democratic presidential primary fight between Hillary Clinton and Barak Obama.  The author is at her best recalling the hard-fought skirmishes, the painful decision many liberals felt in having to choose between a woman candidate and an African-American candidate, and the differences the campaign exposed among left-leaning culture warriors.

In Walsh’s telling this was an especially challenging primary campaign for white liberals like herself.  It seemed, oftentimes, impossible to be on the right side of history.  And, to be honest, it sounds exhausting.  She writes, “[If], after a lifetime of decency, a white person stumbles, she or he is no longer a sister or brother but racist?  That was no kind of beloved community.”

Her use of Dr. King’s famous phrase opens a door to different ways of thinking and responding to the challenges of race faced by Walsh and the country she loves.  It’s a door through which she never steps.  For Dr. King and many who have followed his lead, beloved community is possible because of who God is, what he has accomplished through Christ, and the perfect end which is our hope.  While the Civil Rights Movement was decidedly political, it was a politics that more often than not began with a worshipping community whose allegiance was to neither political party.

While What’s the Matter With White People? never really answers it’s own question, it remains an interesting window into how many white people are experiencing the current racial landscape in America.  The author’s telling of her family’s ethnic immigrant story is interesting enough and could compel others to explore more carefully their own ethnic roots.  For Christians however, the book is something of a cautionary tale about the limits of repentance and reconciliation outside of Christ and his church.  Though we have often failed to live into our theological convictions it remains the case that these convictions provide the most fertile ground for the type of community and reconciliation that Joan Walsh seems to long for but never quite attains.

David Swanson is a pastor on Chicago’s South Side and blogs regularly at davidswanson.wordpress.com.