I don’t know about you, but when I’m in the natural world I want to soak it all up in some Wordworthian manner. I want to hear wind-blown aspen leaves clatter on their branches or the chorus and wood frogs call for mates. I want to smell air perfumed with conifers, spot flashes of color from flitting birds and insects: in short, I want near sensual overload. When I read books about nature I want that experience captured in language that awakens my imagination. But I also want, like in the latter films of Terrence Malick, to see the glory from another world shine through.

Tertullian, Second-Century Christian and author, wrote De Spectaculis, a polemic against spectacle, which in his ancient Roman world contained gladiatorial games and other violent contests, festivals celebrating a menagerie of deities, and the theatre. It’s not what comes out of us that makes us unclean, Jesus said, it’s what we take in. St. Paul tells the Phillipians to think (and by implication to view) the good, true, honorable, and lovely. None of which was to be found in Roman Empire-era entertainment. What about the land (and water) and biota? What will we see that might draw us closer to God rather than lead us astray?

Spectacle, of course, comes from a Latin word meaning to look and in Janisse Ray’s new book, Wild Spectacle: Seeking Wonders in a World Beyond Humans, we are invited to see what she saw in her travels in the western hemisphere.

I wanted to be drawn into this book, to feel the connection to the natural world that Ray feels, but beginning with the first section on the spectacle found in Montana, I was not taken in by a “visually” striking tale. The best nature writers help us to see the glory, but Ray’s writing is lacking. The rest of the book piqued my interest here and there, but didn’t hold it for long.

Some of her observations are spot-on: “Ecotourism is not an earth-friendly industry. It is simply an industry, often resulting in the Disneyfication of the wild. It comes at a price.” In the Desert Southwest, United States, after witnessing some teenage boys, who caught a lizard, throw it too hard into the brush, she relates,

“I sink in the middle of the trail, hang my head in my hands, and burst into tears. I have no idea why I cry so much over spoiled nature, and not just the big things, like political losses or finding out a beautiful forest is gone. I cry if a single tree falls. I feel the tree speaking through my body. I feel actual pain. The image of a crucified lizard, its tiny eye winking in the brokenness of its body, sticks in my mind. I cry as if tears are all I have to speak with. How can we be so careless with life?”

Indeed, compassion for the natural world is necessary, perhaps today more than ever. But just like art for art’s sake, nature for nature’s sake fails to capture everyone’s imagination.

Quite often in books about nature, religion is a favored whipping boy. While there are legitimate criticisms one can aim at Western Christianity with regards to its relationship to the natural world (Wendell Berry’s work is a great starting point), it can be dispelled with a right reading of the Bible and many church fathers and mothers. So it is no surprise when Ray mentions religion a few times briefly (usually Christianity, as she hints about a Fundamentalist upbringing) but then also in the desert: while hiking and camping in Arches National Park, she comes across an Episcopal “minister” (on Easter day!)

“When we move to leave, the minister says impulsively, taking my hand, ‘Let’s pray.’ I’m not a faith-based person–I think religion has ruined a lot of God’s creation and oppressed a lot of people–but I’m all for spirituality. So we make a circle in the slick-rock, rich and poor alike, and the minister thanks Father/Mother God for wild places, for the vigor these places give us, and asks for strength in protecting them. The minister raises his hands at the ‘amen’ forcing all our hands in the air.”

Ray is strongest when critiquing the consumerist mindset that we bring to ecosystems. While visiting Mexico to observe the southern destination of monarch butterfly migrations she encounters hundreds of thousands of dead lepidoptera, victims of a snowstorm. She notes an old man striving to “save them [some live butterflies buried by the corpses of their kind] from the trampling feet of the tourists, who would not care what they destroyed in their haste to see a natural wonder and to say they had seen it and take pictures of themselves with it, to show their friends back home.”

It’s not that her writing is terrible–it’s not–it just seems to be missing that connection that C.S. Lewis talked about: the splendor that is in and yet beyond nature as well. It is always unfair to criticize a book for what it is not, but we only have so much time allotted to us. Why read books that don’t make sharp in us that hunger for the divine?

“Nature writing has been called a marginal literature. If culture is a set of stories we tell about life in a place and how to navigate that life, then nature writing is literature at its most essential. Its tenets are that humans are biological; that we are dependent on the earth; that places are vital to our psyches; and that humans have volumes to learn from nature.”

So true, and then that knowledge should lead from God’s book to God himself (to paraphrase Hugh of St. Victor) to cultivate wisdom on how to learn to live in this world and prepare for its next stage.

I mentioned earlier Tertullian’s critique of the violent, sexual nature of spectacle in his world. To this day, the word spectacle still has some negative connotations, e.g. “Don’t make a spectacle of yourself.” There is much in creation to inspect that inspires fear, dread, disgust, but also joy, awe, and sublimity. I’m just not sure that Janisse Ray’s Wild Spectacle is the book to carry that weight. 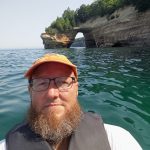 Scot Martin teaches (mostly) 10th grade English at Wayne Memorial High School. He's also a writer and naturalist. His work has appeared most recently in Planet Detroit. He can be found dragging his family around the Great State of Michigan.