Baldwin’s Call to Embody Our Beliefs

You Mean It or You Don’t: James Baldwin’s Radical Challenge
Jamie McGhee and Adam Hollowell

The genesis of You Mean It or You Don’t, though published in 2022, began a decade ago at Duke University in Durham, North Carolina. Jamie McGhee, an undergraduate student at the time, and Adam Hollowell, the director of student ministry at Duke Chapel, watched with others how police brutality and the deaths of Trayvon Martin (2012), Michael Brown (2014), Sandra Bland (2015) sparked and mobilized the #BlackLivesMatter movement. McGhee and Hollowell began to read James Baldwin, together. As they read Baldwin, they found themselves drawn to write with Baldwin, together. They began to write prayers– prayers of grief, prayers of anger, and prayers of gratitude. In 2017, they shared these prayers with others online at www.prayingwithjamesbaldwin.com. Fast forward to the summer of 2020, when racial justice protests were erupting in response to the murders of George Floyd and Breonna Taylor. McGhee and Hollowell found themselves reading Baldwin again, and writing together. The fruit of this reading and writing is their book, You Mean It or You Don’t.

This book is about more than reading Baldwin, and writing with Baldwin. This book is about grappling with the challenge Baldwin presents to us and our contemporary society, and acting accordingly. It is not enough to have the right ‘beliefs,’ or the correct ‘positions’ on various matters. What is necessary, in the words of Baldwin, is commitment. You mean it or you don’t (ix). Each chapter turns the reader’s attention to a transformative moment in Baldwin’s life, or a portion of his work (or both), and draws out the moral implications for the reader. To help the reader move from conviction to action, each chapter also includes sections titled “Act.” Each “Act” consists of practical, concrete steps that help the reader to embody Baldwin’s convictions, especially as they pertain to various social issues. These practical steps can be worked out in our home, neighborhood, local community, religious group, or civic organization.

There are nine chapters in this book, each addressing a broad social issue, focusing on specific aspects of the issue. In the opening chapter, “Tell Me, Where Do You Live?”, McGhee and Hollowell begin with the challenge of localizing ourselves. Baldwin’s Blue for Mister Charlie is the guiding text of this chapter. Through this play, the reader sees how Baldwin calls us to consciously reflect upon who we are, where we live, and what our personal history is.

The theme of justice is woven throughout chapters 2, 3, and 4. Chapter 2, “Christmas in Jail,” addresses the issue of mass incarceration. This chapter is rooted in Baldwin’s 1995 essay Equal in Paris, and borrows from his novels If Beale Street Could Talk and Little Man, Little Man, and the play Blues for Mister Charlie. By highlighting the failures and limitations of the present criminal justice system, which has resulted in an epidemic of mass incarceration, a vision of transformative and restorative justice is offered in its place. In their third chapter, “Discovered by What He Found,” McGhee and Hollowell consider the internal life of the individual and its role in moving a community towards justice. Through Baldwin’s appearance on the Dick Cavett Show in 1968 and his “An Open Letter to My Sister, Miss Angela Davis,” the reader explores his taxonomy of emotions and the constructive role such emotions can play in moving forward in the work of justice. In “Serious as a Heart Attack,” the fourth chapter, we are invited to reflect on the contours of justice itself through the help of Baldwin’s novels, such as Tell Me How Long the Train’s Been Gone, The Fire Next Time, Giovanni’s Room, and Another Country. This chapter is about “life after a heart attack” (55). It is about the pursuit of sustainable justice in a broken world after being shaken by a brutalizing confrontation.

The focus of chapters 5, 6, and 7 are social issues. In chapter 5, “We Are a Part of Each Other,” the reader is invited to consider the social issues around sex and sexuality. While many like to pontificate about Baldwin’s gender and sexuality, McGhee and Hollowell would rather invite the reader to consider how Baldwin’s life leads us towards introspection regarding ourselves. Drawing from his essays “To Crush the Serpent” and “Here Be Dragons,” the writers explore what queer and queerness mean and how it can empower us to build cultures of inclusivity and stand up  for the rights of sexual minorities. The marginalization of women is brought to our attention in chapter 6, titled “Listening to Lorraine.” Baldwin’s arranged gathering of Black artists with AG Robert F. Kennedy highlighted the need for the nation to listen to black women. While Baldwin advocated for some women, he also had a tendency to overlook others – a sort of pendulum swing from erasure to overexposure (114). Through Baldwin, the reader is called to pursue greater degrees of consistency in bringing attention to the voices of women. Chapter 7, “Opening the Unusual Door,” calls the reader to consider the care of her community. Baldwin’s final novel,  Just Above My Head, invites us to consider how we can open doors for others. How might we extend hospitality and care to those close to us?

In the closing chapter, “Go the Way Your Blood Beats,” the reader is drawn into the field of the creative arts. Beginning with a consideration of Baldwin’s sources of creative inspiration – from Charles Dickens to Jazz – the reader must not only acknowledge the mental and spiritual weight that artists– especially Black artists– carry, but also allow their work to inspire new works of creativity and beauty that is empowering, restorative, and transformational.

This book is helpful in our cultural moment that is saturated by social media and its ever-constant supply of news information about the nation and the world. In many cases, unfortunately, this new development has led to the abandonment of our local communities. It is now much easier to decry the problems of far-away places, and yet not know who the elected officials of our local county are. McGhee and Hollowell push against this development with a radical prioritization of the local. Through each “Act” you will find a consistent attentiveness to how these varied social issues affect our neighborhoods and our local communities.

Readers  will not only find themselves moved by the genius and humanity of Baldwin, but hopefully empowered to move toward a world that is bending ever more closely to justice. What Baldwin offers to us is, “a revolution of the heart, love in the face of fear, and… radical moral challenge.” He also opens the door to a new movement of justice in this cultural moment. 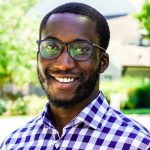 Israel Kolade is the Director of Faith Formation at Holy Trinity Anglican Church in Costa Mesa, California. He is a MDiv Student at Fuller Theological Seminary, and a graduate of the University of London.