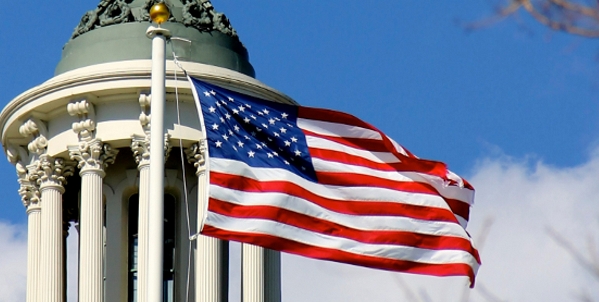 An essay by James Calvin Davis,
author of the new book:

This Fourth of July, many American Christians will return to sanctuaries adorned with the Stars and Stripes, to sing patriotic hymns and hear sermons expounding on the ways God has blessed America. For some Christians, celebrating the Fourth in church will be a welcome contrast from last summer and another step toward normality.

But for others of us, the celebration of Independence Day and other national holidays in church raises questions about the proper relationship between fidelity to Christ and allegiance to the United States. Of course, it is an American tradition to collapse the two allegiances into one, and we saw the consequence of that equivalence on January 6. Christian nationalism, or the militant belief that the US is a Christian nation ordained by God to protect and propagate Christian ideals, has been around in one form or another since the birth of the nation, but it enjoyed considerable resurgence during the presidency of Donald Trump. Christian nationalists assume that to be Christian and to be American are essentially the same thing; if you are not the former, then you are not the latter. Not really. For nationalists, pluralism and church-state separation challenge the righteous spirit of the nation, for America’s divine purpose is nothing less than a crusade against anti-Christian, anti-American forces, both foreign and domestic. When insurrectionists stormed the Capitol to “stop the steal” of their country, toting “Jesus 2020” flags and large crosses to complement the gallows they constructed on federal ground, they put the potential of Christian nationalism on bold display.

The problems with Christian nationalism are legion. First, it depends on a bad reading of history. The assumption that the US was founded by Christians to be an explicitly holy nation runs roughshod over the First Amendment’s allergy to religious establishments, and it glosses over the very different motivations and intentions of the nation’s Founders. For every Revolutionary leader like clergyman John Witherspoon, there was a Thomas Jefferson or Thomas Paine, leaders who were highly unorthodox in their religious beliefs if they subscribed to religion at all. Religious and non-religious constituencies were essential to the emergence of bedrock American principles like religious freedom and the institutional separation of church and state. Few spokespersons for American independence in the eighteenth century resembled the militant religiosity of today’s far-right evangelicals.

Collapsing Christian identity and national identity is also bad theology. The Ten Commandments warn us that “Thou shalt have no other gods before me” (Exodus 20:3 KJV), but when Christians collapse faith and patriotism, they transform the nation into an idol. The United States becomes a god whose will is whatever serves the national interest. Worse yet, national figures (say, a president) are anointed as God’s messiah, regardless of whether they display any moral consistency with (or even basic knowledge of) the Christianity our nation presumably defends. When the nation is afforded such divine importance, though, it becomes nearly impossible to critically evaluate American leaders, institutions, or policies, for criticism of the nation amounts to blasphemy.

Christian observance of national holidays like Independence Day would seem to play right into this dangerous collapse of allegiances, and, truth be told, it often does, at least if judged by the frequency with which jingoistic sermons thunder from American pulpits each year around July 4. But I think it is possible to observe holidays of national importance in church in a way that steers clear of such dangerous messaging, while also providing Christians an opportunity to reflect meaningfully on the moral strengths and shortcomings of our national life. There is nothing inherently sinister about gratitude for one’s country and taking pride in being an American (when such pride is warranted). Christians can regard their country and its government, culture, and traditions as gifts from God. When they are well ordered, the institutions and cultures of our public life protect us, define us, create opportunities for mutual flourishing, and occasionally teach us something about what is right and good. As such, they are worthy of celebration.

But fidelity to God requires us to keep patriotism in perspective. We Christians acknowledge a little thing called sin, a doctrine that reminds us that even good things are open to corruption, including the nation we love. Chastened Christianity insists that we acknowledge our country’s vices as well as its virtues, and faithfulness to both God and country sometimes requires us to serve as voices of dissent against the sins that plague our nation. Piety compels us to measure our national life against the ethics of Jesus and to call out the cultural violence, militarism, consumerism, misogyny, racism, and class stratification the US harbors, in the name of the God to whom our primary allegiance belongs.

There are aspects of life in the US that I think are truly good, so count me among those American Christians who will take a moment this July 4 to give thanks to God for the blessings of country. But I interpret my allegiance to Caesar through my allegiance to God, so I also will take time this holiday weekend to reflect on the failures of my beloved nation and contemplate ways I might righteously dissent to its injustices with better effect. Faith may underwrite appreciation for country, but faith also compels critical opposition when the nation deviates from what Christ tells us is morally right and good. Figuring out when piety and patriotism flow in the same direction and when they pull against each other requires considerable wisdom and discernment. That is all the more reason for us to take moments in our church life to reflect on the “holy days” of our national life, as occasions for both gratitude and prophetic critique. 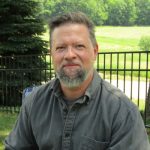 James Calvin Davis is the George Adams Ellis Professor of Liberal Arts and Religion at Middlebury College (Vermont). He is the author of American Liturgy: Finding Theological Meaning in the Holy Days of US Culture (Cascade, 2021).