Learning to Make Sense of Jesus

An Unconventional God: The Spirit According to Jesus
Jack Levison

The church I grew up in had a lot to say about the Father and the Son. When it came to the third member of the Trinity, however, the messaging was less clear. Other than a few mentions in hymns and prayers, or warnings about excesses of the Spirit, I recall very little being offered.

More recent conversations with church folk along with teaching Bible and theology for college students suggests knowledge of the Spirit is still minimal—which is why the writings of Jack Levison are so welcome. Levison, a professor at Perkins School of Theology, couples considerable Biblical scholarship with care for today’s church and world to produce books and articles that are deeply grounded and readily accessible. At the same time, Levison also takes readers down paths that are unexpected. For instance, A Boundless God, published earlier this year, shows how much is going on in the Old Testament regarding the Spirit. If you approach that book as I did, thinking the OT had just a passing interest in Spirit, you will be pleasantly surprised; you’ll also be primed for An Unconventional God. In this companion volume, Levison dives into the Gospels.

Looking at the Gospels for information about the Spirit is unusual; very often, such study starts with Pentecost and then moves to Paul’s letters. But while he is clearly aware of and willing to interact with Acts and the epistles, Levison wants to shine light on how the “impact of the Holy Spirit on Jesus is pivotal to all four Gospels” (3), and thus in turn, to our grasp of Jesus and his teaching. Further, the Gospels’ portrayals of Spirit bring out notes not often heard in Paul’s writing, since they grow from memory “that gave the Holy Spirit a dimmer tenor, a darker hue” (4). My early exposure to the Spirit had nothing to say about this aspect of the Spirit at all, but it is an important theme in Levison’s book.

Levison’s careful treatment of both Biblical and non-Biblical texts is apparent, but never off-putting. There are, for instance, a number of arguments that turn on a single noun or verb, or even a single preposition, but such detail is presented by one who is also a fine writer. Readers will find themselves engaged and propelled by frequent, insightful turns of phrase.

An Unconventional God begins with birth narratives where there is a flurry of Spirit activity around the arrival of both John and Jesus. Levison shows how this Spirit has been anticipated, too, by Old Testament prophets and chroniclers. Indeed, as he will say repeatedly, awareness of ancient voices improves understanding of these Gospel accounts. Take the way Elizabeth, filled with the Holy Spirit, offers loud praise when Mary visits: in Luke’s description of the scene, this ties back to an account of the temple’s filling by God’s glory and subsequent exclamations by priests (2 Chronicles 5:13).

Then we come to Jesus’s baptism, and again hear echoes from the Old Testament: the voice speaking at the Jordan repeats phrases from Psalm 2 and Isaiah 42; the descent of a dove recalls a hovering over the waters of creation. But Levison does more than link NT texts to OT antecedents. He also wants readers to reckon with a side of Spirit not seen by those who talk only about fruit or gifts.

In examining the descent of the Spirit at Jesus’s baptism, for example, Levison vaporizes any sort of gauzy image we may have conjured about this scene. This is, after all, the Spirit who leads Jesus into the desert to face the devil. Or, as Mark puts it, the Spirit drives out Jesus, to face this enemy. Remember that line about a dimmer tenor and darker hue? Levison points to the harshness of the Spirit that “banishes (Jesus) to a godforsaken wilderness” (63). For those who see the Spirit only as gentle and peace-loving, this sort of description startles. But it also prepares. Jesus, Levison reminds us, was “destined to endure late summer” (69), and much of his ‘inspired’ life will be difficult.

Between the wilderness and Jesus’s passion, there are only a few comments about the Spirit. Of those, the Spirit’s power for exorcisms and healing is noticeable, which we expect. But Levison is more eager to discuss the connection between power and teaching. He makes much of the notion that “God is in the business of revelation” as the Spirit interacts with the Son to make the Father known (89).

One key component of the Spirit’s power for teaching has to do with enabling followers to make sense of Jesus, an idea Levison finds woven into the fourth Gospel. He notes the disciples’ confusion regarding the Lord in the early years, and then highlights comments (see 2:19-22; 12:16; 13:2-7) about clarity that will “bloom only in retrospect” (169) once the Spirit guides disciples into all truth. Levison challenges the view that Jesus’s words about this function of the Spirit (see John 16:12-14) apply to events still future; he suggests that the Spirit illuminates the significance of Jesus’s earthly life and ministry in the wake of his death and resurrection.

An Unconventional God is distinctive for its interest in the Gospels, and the insistence that “Gospel authors tether their understanding of the Holy Spirit to the Jewish Scriptures” (193). Both raise fresh insights about the Spirit, but also make summarizing the book’s arguments in bullet points difficult. Take the section on Jesus’s remark about “blasphemy against the Spirit” (e.g. Matthew 12:31). Levison calls this “the most disconcerting saying about the Holy Spirit in the New Testament” (195), and then wends his way through each of the Synoptics and several OT passages before offering an interpretation. A question often raised during study of the Spirit requires a rather long time to resolve.

Still, while the paths this book takes may wind a bit, they routinely open up onto new vistas; such is the effect of studying Gospels that do not present carefully formulated doctrines so much as tell stories which incorporate strands of more ancient tales. Along the way, Jack Levison proves to be an engaging, thought-provoking guide. His regard for and perspective on the Spirit who inspires Jesus, and then His followers, to endure as they take up the challenging work of sharing the gospel with a world in need, makes Jack Levison’s An Unconventional God well worth reading. 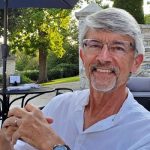 Dan Schmidt pastors a UCC congregation in Harrisburg, Pennsylvania. He writes fiction and non-fiction, and blogs sporadically at www.toucanic.net