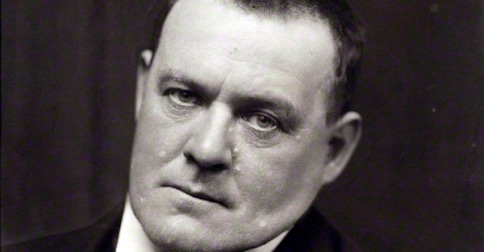 Hilaire Belloc is an often-overlooked Catholic writer of the early twentieth century.

Belloc was one of the most prolific writers in England during his lifetime. He was known as a writer, orator, poet, sailor, satirist, man of letters, soldier and political activist. His Catholic faith had a strong impact on his works. e was a noted disputant, with a number of long-running feuds, but also widely regarded as a humane and sympathetic man. His poetry encompassed comic verses for children and religious poetry. He also collaborated with G. K. Chesterton on a number of works. (Adapted from Wikipedia)

G.K. Chesterton wrote the following biographical sketch of his friend, as an introduction to the book, Hilaire Belloc: The Man and His Work by C. Creighton Mandell (FREE ebook edition available from Project Gutenberg). In honor of Belloc’s birthday on July 27, we reprint this brief essay.

When I first met Belloc he remarked to the friend who introduced us that he was in low spirits. His low spirits were and are much more uproarious and enlivening than anybody else’s high spirits. He talked into the night; and left behind in it a glowing track of good things. When I have said that I mean things that are good, and certainly not merely bons mots, I have said all that can be said in the most serious aspect about the man who has made the greatest fight for good things of all the men of my time.

We met between a little Soho paper shop and a little Soho restaurant; his arms and pockets were stuffed with French Nationalist and French Atheist newspapers. He wore a straw hat shading his eyes, which are like a sailor’s, and emphasizing his Napoleonic chin. He was talking about King John, who, he positively assured me, was not (as was often asserted) the best king that ever reigned in England. Still, there were allowances to be made for him; I mean King John, not Belloc. “He had been Regent,” said Belloc with forbearance, “and in all the Middle Ages there is no example of a successful Regent.” I, for one, had not come provided with any successful Regents with whom to counter this generalization; and when I came to  think of it, it was quite true. I have noticed the same thing about many other sweeping remarks coming from the same source.

The little restaurant to which we went had already become a haunt for three or four of us who held strong but unfashionable views about the South African War, which was then in its earliest prestige. Most of us were writing on the Speaker, edited by Mr. J. L. Hammond with an independence of idealism to which I shall always think that we owe much of the cleaner political criticism of to-day; and Belloc himself was writing in it studies of what proved to be the most baffling irony. To understand how his Latin mastery, especially of historic and foreign
things, made him a leader, it is necessary to appreciate something of the peculiar position of that isolated group of “Pro-Boers.” We were a minority in a minority. Those who honestly disapproved of the Transvaal adventure were few in England; but even of these few a great number, probably the majority, opposed it for reasons not only different but almost contrary to ours. Many were Pacifists, most were Cobdenites; the wisest were healthy but hazy Liberals who rightly felt the tradition of Gladstone to be a safer thing than the opportunism of the Liberal Imperialist. But we might, in one very real sense, be more strictly described as Pro-Boers. That is, we were much more insistent that the Boers were right in fighting than that the English were wrong in fighting. We disliked cosmopolitan peace almost as much as cosmopolitan war; and it was hard to say whether we more despised those who praised war for the gain of money, or those who blamed war for the loss of it. Not a few men then young were already predisposed to this attitude; Mr. F. Y. Eccles, a French scholar and critic of an authority perhaps too fine for fame, was in possession of the whole classical case against such piratical Prussianism; Mr. Hammond himself, with a careful magnanimity, always attacked Imperialism as a false religion and not merely as a conscious fraud; and I myself had my own hobby of the romance of small things, including small commonwealths. But to all these Belloc entered like a man armed, and as with a clang of iron. He brought with him news from the fronts of history; that French arts could again be rescued by French arms; that cynical Imperialism not only should be fought, but could be fought and was being fought; that the street fighting which was for me a fairy-tale of the future was for him a fact of the past. There were many other uses of his genius, but I am speaking of this first effect of it upon our instinctive and sometimes groping ideals. What he brought into our dream was this Roman appetite for reality and for reason in action, and when he came into the door there entered with him the smell of danger.

There was in him another element of importance which clarified itself in this crisis. It was no small part of the irony in the man that different things strove against each other in him; and these not merely in the common human sense of good against evil, but one good thing against another. The unique attitude of the little group was summed up in him supremely in this; that he did and does humanly and heartily love England, not as a duty but as a pleasure and almost an indulgence; but that he hated as heartily what England seemed trying to become. Out of this appeared in his poetry a sort of fierce doubt or double-mindedness which cannot exist in vague and homogeneous Englishmen; something that occasionally amounted to a mixture of loving and loathing. It is marked, for instance, in the fine break in the middle of the happy song of camaraderie called “To the Balliol Men Still in South Africa.”

“I have said it before, and I say it again,
There was treason done and a false word spoken,
And England under the dregs of men,
And bribes about and a treaty broken.”

It is supremely characteristic of the time that a weighty and respectable weekly gravely offered to publish the poem if that central verse was omitted. This conflict of emotions has an even higher embodiment in that grand and mysterious poem called “The Leader,” in which the ghost of the nobler militarism passes by to rebuke the baser–

“And where had been the rout obscene
Was an army straight with pride,
A hundred thousand marching men,
Of squadrons twenty score,
And after them all the guns, the guns,
But She went on before.”

Since that small riot of ours he may be said without exaggeration to have worked three revolutions: the first in all that was represented by the Eyewitness, now the New Witness, the repudiation of both Parliamentary parties for common and detailed corrupt practices; second, the alarm against the huge and silent approach of the Servile State, using Socialists and Anti-Socialists alike as its tools; and third, his recent campaign of public education in military affairs. In all these he played the part which he had played for our little party of patriotic Pro-Boers. He was a man of action in abstract things. There was supporting his audacity a great sobriety. It is in this sobriety, and perhaps in this only, that he is essentially French; that he belongs to the most individually prudent and the most collectively reckless of peoples. There is indeed a part of him that is romantic and, in the literal sense, erratic; but that is the English part. But the French people take care of the pence that the pounds may be careless of themselves. And Belloc is almost materialist in his details, that he may be what most Englishmen would call mystical, not to say monstrous, in his aim. In this he is quite in the tradition of the only country of quite successful revolutions. Precisely because France wishes to do wild things, the things must not be too wild. A wild Englishman like Blake or Shelley is content with dreaming them. How Latin is this combination between intellectual economy and energy can be seen by comparing Belloc with his great forerunner Cobbett, who made war on the same Whiggish wealth and secrecy and in defense of the same human dignity and domesticity. But Cobbett, being solely English, was extravagant in his language even about serious public things, and was wildly romantic even when he was merely right. But with Belloc the style is often restrained; it is the substance that is violent. There is many a paragraph of accusation he has written which might almost be called dull but for the dynamite of its meaning.

It is probable that I have dealt too much with this phase of him, for it is the one in which he appears to me as something different, and therefore dramatic. I have not spoken of those glorious and fantastic guide-books which are, as it were, the textbooks of a whole science of Erratics. In these he is borne beyond the world with those poets whom Keats conceived as supping at a celestial “Mermaid.” But the “Mermaid” was English–and so was Keats. And though Hilaire Belloc may have a French name, I think that Peter Wanderwide is an Englishman.

I have said nothing of the most real thing about Belloc, the religion, because it is above this purpose, and nothing of the later attacks on him by the chief Newspaper Trust, because they are much below it. There are, of course, many other reasons for passing such matters over here, including the argument of space; but there is also a small reason of my own, which if not exactly a secret is at least a very natural ground of silence. It is that I entertain a very intimate confidence that in a very little time humanity will be saying, “Who was this So-and-So with whom Belloc seems to have debated?”