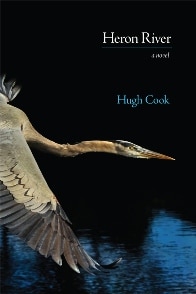 A Gold Leaf of Faith

Tragedy happens near the Indian Road driveway between the fourth and fifth spruce. A mother turns from the window to oven and lifts out the rhubarb pie. Outside, her running boy missteps. Wooden boards collapse and he falls into a well.

Canadian writer and Calvin College alumnus Hugh Cook in his new novel Heron River tells what happens after tragedy deforms normal expectation. What comes twenty years later when the resuscitated boy named Adam is a man and his mother, Madeline, contends with all that has changed?

Now the story enlarges to include more characters and another tragedy surfaces. Policewoman Tara, bully Orrin and the adopted boy Jacob—all neighbors to Adam and Madeline—enter the story when Heron River, that line of water that warbles past town, relinquishes the body of an elderly neighbor. While Policewoman Tara calls it murder and trails clues, Orrin begins to stalk Adam’s mom, Madeline, who walks the old mill alone.

Ursula Le Guin’s phrase “thought experiment” applies well to Heron River. Cook’s thought experiment is how he rotates his story on the axis of multiple viewpoints. This writer’s word choice, metaphors and sentence construction modulate the different voices well. Fragments—tough and practical—carry the scenes that belong to the policewoman while coarse, stream-of-conscious, run-on sentences winnow through Orrin’s.

Cook at 69 is a craftsman, who confesses to spending an hour on one sentence when needed. The texture of his writing is supple, the smooth sheen of water beneath the sun. He is a Marilynne Robinson in novel output: low and fine.

The novelist’s Christian Reformed faith is a gold leaf on the dark waters of Heron River. The prologue opens a subtle faith conversation to ask the age-old question, where is God in our suffering? Madeline bakes the rhubarb pie for church when Adam falls. Now twenty years later, she blames God for Adam’s challenges and her own. Cook, though, doesn’t preach—or part the seas. Madeline struggles to pick her way.

Cook is no Pollyanna, meaning his faith doesn’t stop the characters’ troubles. Tragedy begets tragedy; the novelist is firm here. Adam, in losing some mental capacity, can no longer ward off those who abuse, and we’re as helpless as Adam to stop it. But Cook also shows the glory, the hope. The world that holds those who abuse the helpless also holds those who are kind.

Cynthia Beach is Assistant Professor of Literature at Cornerstone University.