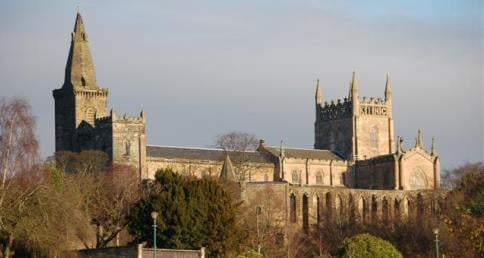 Herbert Workman’s book, The Evolution of the Monastic Ideal (1913), is a classic work

that not only introduces the history of Christian monasticism, but also provides an account of the theological forces that guided this tradition.

We are pleased to offer this book as a FREE PDF ebook to download.

From the book’s preface:

I have not set out to write the history of Monasticism — a vast task, in some respects rendered needless by the great works that have been devoted to the subject, in other respects almost impossible because of the wide field of detail to be covered. Nor have I attempted a mere criticism of Monasticism, whether past or present. Every form by which human aspiration has attempted to realize the divine seems to me too sacred for destructive, negative criticism, however much we may differ from it. Nor will the reader find in these pages any account of the dress of the monks, the architecture of their churches, or the arrangements of the monasteries, themes that have been amply treated by competent writers.

I have strictly confined myself to the history of the Monastic Ideal, tracing out the various stages in its evolution, and drawing attention both to the varying, concrete forms in which the Ideal has embodied itself, and to the effect of the Ideal upon the life and thought of the centuries. Works upon Monasticism abound, sometimes written by enthusiastic defenders, more often by those eager to expose its mistakes, both types, for the most part, based upon inadequate material or second-hand authorities. I may at least claim that there is nothing in this book, in spite of imperfections of which no one is more conscious than the author, which is not the outcome of the honest study of the original sources, and of the best accessible modern literature. Throughout the work I have not made it my primary business to praise or blame, or to write as either advocate or judge — for, in such cases, judgement is too often, historically speaking, the result of an anachronistic outlook, of necessity unhistorical because it is anachronistic — but to give an impartial record of the development of a great ideal and of the lessons which it teaches.

The Monastic Ideal, whether to-day it be true or false, has played a great part in the history of religion and life. We hold, therefore, that it is entitled to the reverent study of all those who recognize in the formative ideas of the past, whatever be their present value, the workings of one Master-mind, who at sundry times and in divers manners hath spoken unto us by His Son.

IN every human heart, except, possibly, the utterly depraved, we find a yearning for self-surrender rising at times to a passion. Even in the worldling, buried deep beneath the deposits of self, there is an instinct he cannot explain, the power of which he may attempt to laugh away, that leads him, in spite of himself, in a moment of heroic decision to give his life a ransom for others. Few there are to whom there do not come at times visions of a nobler life. Like Bunyan’s warrior, we tell the man with the inkhorn to write down our name in the roll of those who would join the immortals.

This imperial note of our higher natures can never wholly be silenced by the lower, and finds expression in every form of religion, however degraded or unreasoning. For the Christian, at least, self-surrender is the imperative call of the Master. ‘ If a man would come after Me, let him take up his cross and follow Me,’ is still the absolute condition of discipleship. ‘ If a man love father or mother more than Me he is not worthy of Me’ is one of those sentences so hard to interpret from the a priori standpoint, so easy to understand when we view its results in the life of the Church. The form this renunciation takes has varied with the changing years, nevertheless its essential feature is always the same ; the print of the nails upon the hands and feet, the mark of the thorns upon the brow.

Throughout the universal Church, for almost a thousand years, there was one word which more than any other conveyed in itself the essential features of this renunciation. This was Monasticism. One word in its time plays many parts, and Monasticism, as we shall see later, came to stand for many different even opposing movements. Nevertheless in the main Monasticism and Renunciation for long ages were looked upon as almost interchangeable terms ; in the sense, that is, that no real renunciation could be conceived of which did not end in some form of Monasticism. In the Middle Ages it is hardly too much to say that ” the history of piety is the history of Monasticism.” So completely was the monk identified with the renunciant that a priest who was not a monk was regarded as still belonging to the world. He was a ‘ secular,’ not one of the ‘ religious,’ a term strictly confined to those who had adopted the monastic life. In the same way ‘ conversion ‘ had none of its modern evangelical significance, but connoted always the renunciation which expressed itself by reception into an order.

Instead therefore of dismissing Monasticism with the sneer of Gibbon ” at the unhappy exiles from social life, impelled by the dark and implacable genius of superstition,” we shall do well to study, with the reverence which any ideal however faulty deserves, what were the causes which led men to the identification of ‘religion ‘ and Monasticism, and what have been the results of this ideal in the history of the Church.