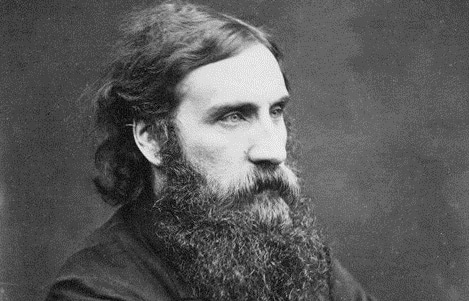 *** This story is found in our ebook
My Little King: George Macdonald’s
Christmas Stories and Songs.
ONLY 99c for Kindle!!!

On the Sunday evening, Alice’s lover, having heard, not from herself, but by a side wind, that she was going home the next day, made his appearance in Wimborne Square, somewhat perplexed–both at the move, and at her leaving him in ignorance of the same. He was a cabinet-maker in an honest shop in the neighbourhood, and in education, faculty, and general worth, considerably Alice’s superior–a fact which had hitherto rather pleased her, but now gave zest to the change which she imagined had subverted their former relation. Full of the sense of her new superiority, she met him draped in an indescribable strangeness. John Jephson felt, at the very first word, as if her voice came from the other side of the English Channel. He wondered what he had done, or rather what Alice could imagine he had done or said, to put her in such tantrums.

“Alice, my dear,” he said–for John was a man to go straight at the enemy, “what’s amiss? What’s come over you? You ain’t altogether like your own self to-night! And here I find you’re goin’ away, and ne’er a word to me about it! What have I done?”

Alice’s chin alone made reply. She waited the fitting moment, with splendour to astonish, and with grandeur to subdue her lover. To tell the sad truth, she was no longer sure that it would be well to encourage him on the old footing; was she not standing on tiptoe, her skirts in her hand, on the brink of the brook that parted serfdom from gentility, on the point of stepping daintily across, and leaving domestic slavery, red hands, caps, and obedience behind her? How then was she to marry a man that had black nails, and smelt of glue? It was incumbent on her at least, for propriety’s sake, to render him at once aware that it was in condescension ineffable she took any notice of him.

“What on ‘arth’s come over you?” exclaimed John, with the first throb of rousing indignation. “But if you ain’t your own self no more, why, Miss Cox be it. ‘T seems to me ‘s if I warn’t my own self no more–‘s if I’d got into some un else, or ‘t least hedn’t got my own ears on m’ own head.–Never saw or heerd Alice like this afore!” he added, turning in gloomy bewilderment to the housemaid for a word of human sympathy.

The movement did not altogether please Alice, and she felt she must justify her behaviour.

“You see, John,” she said, with dignity, keeping her back towards him, and pretending to dust the globe of a lamp, “there’s things as no woman can help, and therefore as no man has no right to complain of them. It’s not as if I’d gone an’ done it, or changed myself, no more ‘n if it ‘ad took place in my cradle. What can I help it, if the world goes and changes itself? Am I to blame?–tell me that. It’s not that. I make no complaint, but I tell you it ain’t me, it’s circumstances as is gone and changed theirselves, and bein’ as circumstances is changed, things ain’t the same as they was, and Miss is the properer term from you to me, John Jephson.”

“Don’t swear, John Jephson–leastways before a lady. It’s not proper.”

“It seems to me, Miss Cox, as if the wind was a settin’ from Bedlam, or may be Colney Hatch,” said John, who was considered a humourist among his comrades. “I wouldn’t take no liberties with a lady, Miss Cox; but if I might be so bold as to arst the joke of the thing–“

“Joke, indeed!” cried Alice. “Do you call a dead uncle and ten thousand pounds a joke?”

“I do mean it, and that you’ll find, John Jephson. I’m goin’ to bid you good-bye to-morrer.”

“And for how long?” gasped John, fore-feeling illimitable misfortune.

“That depends,” returned Alice, who did not care to lessen the effect of her communication by mentioning her promised return for a season. “–It ain’t likely,” she added, “as a heiress is a goin’ to act the nuss-maid much longer.”

“But Alice,” said John, “you don’t mean to say–it’s not in your mind now–it can’t be, Alice–you’re only jokin’ with me–“

“Indeed, and I’m not!” interjected Alice, with a sniff.

“I don’t mean that way, you know. What I mean is, you don’t mean as how this ‘ere money–dang it all!–as how it’s to be all over between you and me?–You can’t mean that, Alice!” ended the poor fellow, with a choking in his throat.

It was very hard upon him! He must either look as if he wanted to share her money, or else as if he were ready to give her up.

“Arst yourself, John Jephson,” answered Alice, “whether it’s likely a young lady of fortun’ would be keepin’ company with a young man as didn’t know how to take off his hat to her in the park?”

Alice did not above half mean what she said: she wished mainly to enhance her own importance. At the same time she did mean it half, and that would have been enough for Jephson. He rose, grievously wounded.

“Good-bye, Alice,” he said, taking the hand she did not refuse. “Ye’re throwin’ from ye what all yer money won’t buy.”

She gave a scornful little laugh, and John walked out of the kitchen.

At the door he turned with one lingering look; but in Alice there was no sign of softening. She turned scornfully away, and no doubt enjoyed her triumph to the full.

The next morning she went away.