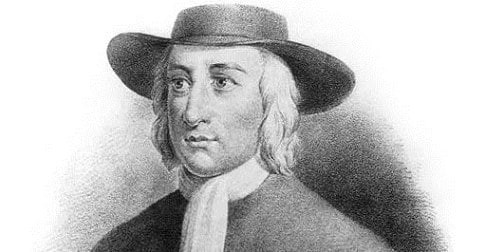 Yesterday marked the anniversary of the death of George Fox, the founder of the Quakers.

George Fox (September 1624 – 13 January 1691) was an English Dissenter and a founder of the Religious Society of Friends, commonly known as the Quakers or Friends.

The son of a Leicestershire weaver, Fox lived in a time of great social upheaval and war. He rebelled against the religious and political authorities by proposing an unusual and uncompromising approach to the Christian faith. He travelled throughout Britain as a dissenting preacher, for which he was often persecuted by the authorities who disapproved of his beliefs.

Fox married Margaret Fell, the widow of one of his wealthier supporters; she was a leading Friend. His ministry expanded and he undertook tours of North America and the Low Countries. Between these tours, he was imprisoned for more than a year. He spent the final decade of his life working in London to organize the expanding Quaker movement.
(via Wikipedia)

In remembrance of Fox, we are delighted to share three ebook editions of his work that is available for FREE download!

Browse this book below or