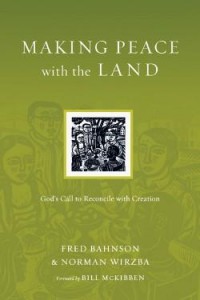 Making Peace with the Land: God’s Call to Reconcile with Creation.

Chris Smith’s appreciative review is available only in the print magazine.
Brent Aldrich’s semi-critical review (click here to read – PDF) challenges us with the question of how our eschatology shapes the ways in which we pursue reconciliation with the land.

In response to Brent Aldrich’s review of our book Making Peace With the Land, I wish to clarify what I believe are some fundamental misunderstandings and elisions on the part of the reviewer.

Mr. Aldrich’s main bone to pick, it seems to me, is his claim that our book exhibits an “overly-ruralized eschatology.” I think this is a mistaken accusation. First of all, the examples I wrote about were explicitly chosen to show how we might reconcile with the land in variety of places, both rural and urban. From the deserts of the Sahel to church gardens to a suburban farm (ECHO, just North of Ft. Lauderdale) to inner city Curitiba, a city of 2.1 million people, I tried to present the full spectrum of possibilities even in such a short book.

Despite the wide spectrum presented, Mr. Aldrich accuses us of a rural bias, which he dismissively calls “pastoral,” bemoaning that we don’t give enough attention to cities. If a city of 2.1 million people isn’t urban enough for him, then there’s not much I can say about that. But regardless, he is correct to say that we do focus more on making peace with rural land rather than urban land, and that’s not so much a bias as it is a declaration of an ecological reality: cities depend on the countryside much more than the other way around.

Most urbanites fail to understand just how inextricably dependent their lives are on the hinterlands. That’s not an attempt to “diss the city” so much as it is stating a demonstrable reality. Urban gardens are great, but they will never produce the amount of food necessary to sustain an urban population. Even in Havana, which offers up a kind of Beatific Vision of urban agriculture, most of the city’s food still comes from the hinterlands (and by hinterland I mean the rural farms surrounding the city). Urban gardens are wonderful ways to teach people about where their food comes from and, in the example I gave in Chapter 6 of the urban rooftop gardens at ECHO, a way to get fresh veggies in one’s diet in even the poorest of the world’s slums. But given that 70% of most of our diet comes from grains and pulses, we will never get away from the need for well-managed rural farms which in our current food system are anything but places of shalom. Thus, the need for reconciliation. The starting point for urbanites to reconcile with the land is to begin to understand just how much their lives depend on farms outside the city gates.

Aldrich thinks we somehow prize the Garden over the New Jerusalem when the image of the later comprises our entire epilogue. He says that too often Christians are “stuck in the garden” (implying that we, the authors, are also stuck there). Yet on p. 56, I say emphatically: “We must be clear, though; we aren’t trying to reclaim a lost paradise. Rather, we should welcome the New Jerusalem.” The New Jerusalem is a guiding metaphor for how we should live now—agreed – but that can’t be taken too literally, and this is where I think Aldrich makes his mistaken leap. Through his extensive quoting of various urban theorists, it seems that Aldrich wants us to just baptize our favorite model of a dense urban environment and call it the New Jerusalem. What he misses is that when the biblical writers imagined a city, it was very different from what our dense urban environments look like (or should look like, according to people like Jacobsen).

Aldrich writes:  Furthermore, traditional dense pedestrian cities (as opposed to the wasteful sprawl promulgated in this country as a way to live “closer to nature”) are the most environmentally benign and sustainable forms of human culture…”

That’s simply incorrect. Of course dense pedestrian cities are better than wasteful sprawl – but wasteful sprawl is a straw-man argument, easy for anyone to knock down. Dense pedestrian cities still use far more energy than rural peasant societies. We aren’t promoting a naive back-to-the-land movement or suggesting that we all take up spear chucking and loincloths, but if we’re looking for examples, people like the farmers I described in the Sahel are using far less energy than even the most green-saavy New Urbanite in Manhattan. Aldrich mistakenly thinks that dense pedestrian cities are “environmentally benign,” the sine qua none of human existence toward which we should all be headed, when ecologically speaking that’s incorrect. Rural peasant societies use far less energy, and have the option of producing everything they need to live, an option not available to urbanites. Again, who is growing the majority of the food to support urban dwellers so they might live densely and be pedestrians? It’s certainly not the little community garden down on the corner past the barber shop and the laundromat. Don’t misunderstand – I’m a big supporter of little community gardens down on the street corner. But they function more as a horticultural gateway drug, hopefully leading to bigger and better things, rather than ecological ends in themselves. Most of that urban community gardener’s food will still need to come from the grain belt. Hopefully those community gardeners will develop a relationship with a farmer outside the city so they can start buying most of their food from her and her farming neighbors.

As we imagine the New Jerusalem toward which we’re headed, the image we get of the heavenly city come down to earth looks a lot less like the modern metropolis Aldrich and David Owen propose, even a green one. As to what it does look like, well, that’s harder to say. I hope the examples we pointed to in our book offer at least a starting point.

Fred Bahnson is is co-author of Making Peace with the Land (InterVarsity Press, 2012) and is currently at work on Soil & Sacrament: Four Seasons Among the Keepers of the Earth, forthcoming in 2013 from Free Press.