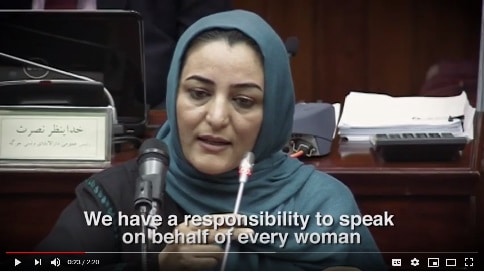 A Review of
Facing the Dragon
A Documentary Film
Sedika Mojadidi, Director

Watch the trailer for this film:

I recently had the opportunity to see several films that were part of the Heartland International Film Festival. Just Mercy and The Two Popes (review coming soon) were both films that I eagerly anticipated, and both were extraordinary. The surprise hit of the festival for me though was Facing the Dragon, a documentary by Sedika Mojadidi. I knew nothing about the film when I got my ticket; I merely saw the film because I had an open slot in my schedule and the brief description of this film in the program guide seemed intriguing. Wow, was I ever glad that I made time to see this raw, yet poignant documentary.

In the wake of the #MeToo movement in the United States, the exploitation and abuse of women in a society that is still much more patriarchal than it likes to admit is being unmasked and reckoned with. The remnants of patriarchy here, however, pale in comparison to the oppression of women in Afghanistan, and especially in areas controlled by the Taliban. Women in Afghanistan enjoyed great freedom while U.S. military forces were present and suppressing the Taliban’s power there. However, as the U.S. military presence waned, beginning in 2011, the Taliban began to resurge, and freedoms that women enjoyed became much more tenuous.

Filmed mostly in 2014, Facing the Dragon is set in this post-withdrawal era, and tracks the lives and challenges of two prominent women, Nilofar, a former doctor who has been elected to Parliament, and Shakila, a journalist who works the Tolo TV network. Both women have prominent careers that have made them advocates for women in Afghan society, but both also are mothers, who must juggle care for their children and their work. Both women face threats to their own lives and the lives of their families because of their work.

I don’t know that I’ve ever seen a documentary as raw and intense as this one. Sedika Mojadidi, an Afghan-American, who was born in Kabul, but raised in the United States, must have had extraordinary access in order to capture some of the scenes depicted in Facing the Dragon. She arrives, for instance, on-scene just after a suicide bomber has detonated a car in Kabul, and in another situation is allowed into the home of a family grieving a loved one taken by similar violence. In a Salon.com interview, Mojadidi describes how she cultivated the trust that would allow this kind of access:

I think that people assume that it was easy for me to get Shakila and Nilofar on board. It was not. It was extremely difficult. The invisible story behind the film is that the ease I have with them took two years of my trying to build a relationship with them and show them my intention with the film. I was consistently working at trying to convince them that they would find it valuable in the end. It took a long time. They didn’t return phone calls for months. The scene with the village elders took me two years to get access to film. I was told there was no way I was going to film that. Nilofar’s family was great and wonderful. I had scenes with her mother, who singlehandedly made her a politician, but the third year of filming her mother withdrew from the film because she feared repercussions. That was painful for me. I spent so much time and it was such an incredible part of Nilofar’s story — but I respected her decision. The people I filmed because of Shakila and Nilofar — they trusted that I wasn’t going to do anything that was exploitative.

The stories of Nilofar and Shakila, as they unwind in Facing the Dragon, are ones of profound courage. Although the cultural forces of a deeply patriarchal society are aligned against them, both women fearlessly fight for the well-being not only of women, but of their nation as a whole. Their conviction to fight for what is good and true regardless of the cost to themselves certainly parallels that of Bryan Stevenson, as depicted in Just Mercy. And such conviction is strikingly rare in our self-centered consumer society. Their stories are ones that merit our careful attention, and Mojadidi is to be commended for this captivating piece of cinema.

—–
C. Christopher Smith is the founding editor of The Englewood Review of Books, and author of several books, including most recently, How the Body of Christ Talks: Recovering the Practice of Conversation in the Church (Brazos Press, 2019).