Reading While Black:
African American Biblical Interpretation as an Exercise in Hope

Esau McCaulley was recently invited to be a contributing opinion writer on religion and culture for the NY Times. Here’s an excerpt from this book by Esau McCaulley that gives a great taste for what’s coming in the book!

Jesus’ most famous address, known to history as the Sermon on the Mount, is recorded in Matthew 5-7. The mountain location echoes the giving of the law at Sinai. Just as the law was directed toward life in the Promised Land, Jesus’ words are directed toward life in God’s kingdom. Jesus is the greater Moses because he does not simply repeat what he hears from God. He speaks on his own accord as the divine king. If there is a place for the Christian to turn to for a way to witness in a world divided and torn by sin, this is it. I want to focus on what Jesus says about the desire for justice and the work of justice to his disciples.

We opened our reflections on the church’s political witness with King’s activities in Birmingham. His justification for his presence was simply that “injustice is here.” He goes on to cite biblical characters who were moved to aid those in need. That leads to the question, Why did Paul or Isaiah or Amos care about justice?

Jesus explains what undergirds the actions of Paul, Isaiah, and MLK in two of his Beatitudes. He says, “Blessed are those who grieve, for they will be comforted. . . . Blessed are those who hunger and thirst for justice, for they will be filled” (Mt 5:4, 6, my translation). To mourn involves being saddened by the state of the world. To mourn is care. It is an act of rebellion against one’s own sins and the sins of the world.

A theology of mourning allowed Rev. Dr. King to look upon the suffering of the people in Birmingham and refuse to turn away. Mourning calls on all of us to recognize our complicity in the sufferings of others. We do not simply mourn the sins of the world. We mourn our own greed, lusts, and desires that allow us to exploit others. Sin is more than exploitation, but it is certainly not less. A theology of mourning never allows us the privilege of apathy. We can never put the interests of our families or our country over the suffering of the world.

Mourning is intuition that things are not right—that more is possible. To think that more is possible is an act of political resistance in a world that wants us to believe that consumption is all there is. Our politicians run on our desires on convincing us that utopia is possible here and they alone can provide it.

The second Beatitude at the center of our reflections moves beyond the suspicion raised in our mourning. It articulates our hope: “Blessed are those who hunger and thirst for justice, for they will be filled.” Hungering and thirsting for justice is nothing less than the continued longing for God to come and set things right. It is a vision of the just society established by God that does not waver in the face of evidence to the contrary. Mourning is not enough. We must have a vision for something different. Justice is that difference. Jesus, then, calls for a reconfiguration of the imagination in which we realize that the options presented to us by the world are not all that there is. There remains a better way and that better way is the kingdom of God. He wants us to see that his kingdom is something that is possible, at least as a foretaste, even while we wait for its full consummation. To hunger for justice is to hope that the things that cause us to mourn will not get the last word.

What does all of this have to do with the public witness of the church? Jesus asks us to see the brokenness in society and to articulate an alternative vision for how we might live. This does not mean that we believe that we can establish the kingdom on earth before his second coming. It does mean that we see society for what it is: less than the kingdom. We let the world know that we see the cracks in the facade.

This call to hunger for justice, in the context of Jesus sitting on a mountain, must be understood as a messianic word:

For a child has been born for us,
a son given to us;
authority rests upon his shoulders;
and he is named
Wonderful Counselor, Mighty God,
Everlasting Father, Prince of Peace.
His authority shall grow continually,
and there shall be endless peace
for the throne of David and his kingdom.
He will establish and uphold it with justice and with righteousness
from this time onward and forevermore.
The zeal of the Lord of hosts will do this.. (Is 9:6-7)

The messianic son of David, as the agent of God’s will, would be known for establishing justice on the earth. To hunger for justice in a messianic context is to long for God to establish his just rule over the earth through his chosen king. Righteousness or justice then, is inescapably political. Hungering for justice is a hungering for the kingdom.

The two Beatitudes discussed above articulate the desire for justice. The last Beatitude under consideration is where Jesus provides us with the practices of justice. Matthew 5:9 says, “Blessed are the peacemakers, for they will be called the sons of God.” Why make peace and how do we go about achieving it? Jesus calls his people to be peacemakers because the kingdom of the Messiah is one of peace.

Isaiah envisions a kingdom in which the hostility between nations (Isaiah 9:7) and the created order will be removed (Is 11:1-9). To call God’s people to peacemaking, then, means beginning the work of ending hostility that will mark the Messiah’s reign. To claim that Jesus envisions the end of personal hostility and to neglect ethnic or national hostility does not do justice to the kingdom theology undergirding the entire sermon. What, then, does peacemaking involve and what does this have to do with the church’s political witness? Biblical peacemaking is the cessation of hostilities between nations and individuals as a sign of God’s in-breaking kingdom. Peacemaking involves assessing the claims of groups in conflict and making a judgment about who is correct and who is incorrect.

Peacemaking, then, cannot be separated from truth telling. The church’s witness does not involve simply denouncing the excesses of both sides and making moral equivalencies. It involves calling in-justice by its name. If the church is going to be on the side of peace in the United States, then there has to be an honest accounting of what this country has done and continues to do to Black and Brown people. Moderation or the middle ground is not always the loci of righteousness. Housing discrimination has to be named. Unequal sentences and unfair policing has to be named. Sexism and the abuse and commodification of the Black female body has to end. Otherwise any peace is false and non-biblical. Beyond naming there has to be some vision for the righting of wrongs and the restoration of relationships. The call to be peacemakers is the call for the church to enter the messy world of politics and point toward a better way of being human.

This peacemaking could be corporate, dealing with ethnic groups and nations at enmity, or it could be personal. When it is corporate, we are testifying to the universal reign of Jesus. When it is interpersonal, we are bearing witness to the work that God has done in our hearts. These things need not be put into competition.

The most interesting thing about this peacemaking is that it doesn’t assume that those at enmity are believers. Jesus does not say make peace between Christians, but make peace. He doesn’t say establish peace by making them Christians, but make peace. Why? Because peacemaking can be evangelistic. Through our efforts to bring peace we show the world the kind of the king and kingdom we represent. The outcome of our peacemaking is to introduce people to the kingdom. Therefore the work of justice, when understood as direct testimony to God’s kingdom, is evangelistic from start to finish. It is part (not the whole) of God’s work of reconciling all things to himself. 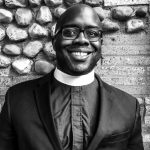 Esau McCaulley is Assistant Professor of New Testament at Wheaton College in Wheaton, Illinois. He is a priest in the Anglican Church in North America where he serves as a Canon Theologian in his diocese C4SO (Churches for the Sake of Others).