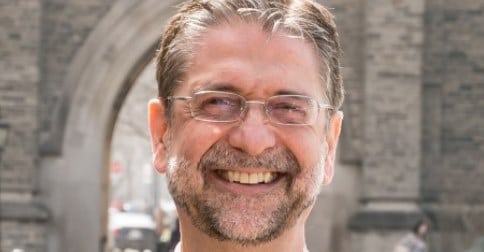 explores the theological foundations of figural interpretation, the hermeneutic that was practiced by Christians from the earliest days of the church through the early modern period. Figural interpretation was replaced by the historical critical method that we use today, and contemporary Christians tend to look down on figural reading as an interpretive method that finds things in the text that aren’t actually there. But Radner argues that this attitude doesn’t do justice to the depth of figural reading, and he makes a compelling argument for the recovery of this ancient practice. Radner, who is a professor of historical theology at Wycliffe College at the University of Toronto, is known for work that is both rich and fresh, and this book is no exception.


ERB: Let’s start with what might be the hardest question. How would you define figural interpretation for people who have never heard of it before?

ER: That’s a good question, and you’re right—it is a hard question. The first thing to be said is that figural interpretation is something that the church has always done. It’s not a matter of inventing a method; it’s a matter of identifying a way that the Bible has been read and continues to be read by lots of different people. The Bible is God’s book that describes the world, the world as it actually is—not just the world as it was.

Figural reading of the Bible, then, was a way of reading the Bible so that it talked about whoever was reading it, wherever they were reading it. The way of making those connections was a way of having something in the Bible figure something else. Figural reading is that reading which brings the figures of the Bible—the people, the events, the objects that are spoken of by God—into a descriptive relationship with other times and periods and persons and events.

ERB: One of your claims is that figural reading is how the authors of Scripture read Scripture, so can you describe the scriptural basis for figural interpretation?

ER: One of the most common current ways that people have of describing figural reading is a Pentecostal “tag,” which is based on the opening of Peter’s words on the day of Pentecost. All the people who are gathered in Jerusalem are wondering why all the disciples are speaking in foreign languages. Peter starts by talking about the prophecy in Joel, and then he says, “This is that which was described . . .” That’s the phrase that Pentecostals have taken up: “This is that.” Paul will talk about this. He’ll take objects or events from the past and say “This is what it’s talking about now.” The most famous would be something like 1 Corinthians 10, which talks about Jesus being the rock that follows Moses around. The Christ that we know today is that which followed the people of Israel in the desert.

So the rock figures Christ in 1 Corinthians. But we could also say that Babylon figures Rome, from either Daniel or the book of Revelation. But it might also figure the United States or Nazi Germany or wherever. As people read it today, the Bible is filled with truths that are figures of other realities.


ERB: The New Testament authors read figurally, the Christians who gave us our creeds read figurally, Augustine read figurally, even Martin Luther has some beautiful figural interpretation. But we tend to think of figural reading as something we’ve “gotten beyond,” because now we’re better equipped to figure out what the text originally “meant.” What do we lose when we focus solely on what the original author meant?

ER: Why did we shift our focus to this notion of authorial intent? It’s clear when you read early interpreters of the Bible that they’re well aware that the authors of the Bible had intentions. But they tended to think that these intentions were only one aspect of the meaning of the Bible, because the Bible, though written down by human beings, was actually inspired by God—wholly. The notion that the Bible is only partly inspired is a more modern notion. Usually the notion was that the Bible is the Holy Spirit speaking; it’s the word of Christ speaking—somehow—through these human authors. So the real issue is, what is God’s intention?

Why did we get away from thinking that? Part of it was our increasingly constricted notion of how God engages the world—that his sovereignty, his power, his creative character was not comprehensive or infinite in complexity of engagement, but rather followed certain rules that we could define in advance. One of the aspects that got defined was the way time works. Things happen in a sequence—past, present, and future—which of course no one ever denied. But then that sequence came to exhaust the character of reality. Before the eighteenth century, conceptions of time were quite different. They were far more malleable. It’s not that people didn’t understand that there was a past, present, and future, but they didn’t have it mapped out, and they also understood the past as being somehow out of our grasp. You couldn’t really define it, and it all belonged to God. What happens is something that God orchestrates in some fashion.

So one thing that is lost is a sense of time itself—and thus all of our experience of temporality—as being somehow caught up in the infinite richness of God’s creative life. Instead, it’s already mapped out in a very thin layer of possibility. Figural reading shows us—if you buy into it, engage it, let it seep into your way of looking at the world—that our lives are actually connected to aspects of reality that fold into a kind of wonderfully complex richness of God’s purposes, which otherwise would be invisible to us.

← Praying for Justice Through th ...