Why Science and Faith Need Each Other: Eight Shared Values That Move Us beyond Fear
Elaine Howard Ecklund

As someone who is both a scientist and a Christian, I have both personal and professional interest in Dr. Elaine Howard Ecklund’s newest book, Why Science and Faith Need Each Other: Eight Shared Values that Move us Beyond Fear. Like Ecklund, I think science and faith address the biggest and most important questions of life.” I am drawn to conversations on science and faith, and I appreciate what Dr. Ecklund has added to this discussion over the past 15 years. Needless to say, when I discovered her newest book, I dove right in. What I found was a timely work that is highly relevant to the current challenges we are facing because it addresses the need for faith and science to work together to solve problems related to the COVID pandemic, climate change, emerging biomedical technologies, and even social justice.

The goal of this book is to provide members of the faith community, including church members who are committed Christians and the pastors who lead them, new ways to think about science-related issues and the relationship between science and faith. Elaine Howard Ecklund does this by providing personal stories from her own life as well as those of Christians in who have successfully reconciled their Christian beliefs with science in a way that nurtures their faith. I like this approach because it humanizes Scientists and helps skeptical Christians to see that many science experts share their values. This is important for solving conflict between science and faith because, as Ecklund says, “We judge people we perceive as similar to us as more moral, trustworthy, and competent, and we tend to view ourselves as similar to those who are part of our communities or who share our values.”

The book is divided into three sections — Building Blocks, Process, and Redemption. In the first section Ecklund invites readers into the discussion by defining common conflicts between those in the faith and science communities and addressing some of the reasons why Christians may hesitate to embrace science and scientists. This section also introduces the theme of the book – fear. Trust in science has declined over the past 30 years among people who attend church, and this has led to much of the conflict between scientists and Christians. For some, it is simply the fear that doubt and questioning will lead people away from faith. For others, science may not seem safe because of past abuses, such as the Tuskegee syphilis experiments, done to people in their communities in the name of science. Regardless of the reason, Ecklund emphasizes the need to understand that fear is at the root of the conflict and the need for both religious and science communities to help people move past this fear.

The end of this section briefly touches on the debate about evolution and human origins. I appreciate that this book isn’t overly focused on this issue. While it is a key topic that fuels many debates between faith and science, Ecklund briefly addresses this elephant in the room by saying, “whether the creation story in Genesis is viewed as a literal description or an allegory, it provides Christians with an indelible sense that humans are unique within creation and have a meaningful, God-given purpose for living.” She then moves past this particular topic to other equally important questions. Some of the other topics addressed include the place for doubt and questioning in congregations of believers, moral issues surrounding treatments for infertility, reproductive genetic technologies for eliminating inherited disorders, and whether it’s possible to over rely on science, rather than God, to provide healing for physical ailments.

The remaining two sections of this book explore eight key virtues — curiosity, doubt, humility, creativity, healing, awe, shalom, and gratitude — that are shared and practiced by those in both science and faith communities with the goal of moving past fear toward reconciliation between science and faith. Of these virtues, curiosity, doubt, and awe, are the virtues that resonate most deeply for me. Curiosity, doubt, and questioning are often discouraged in church settings because many believers consider these a sign of weak faith. However, Ecklund points out that “faith is not the same as certainty,” and that creativity and doubt, which are foundational for scientific discovery, should have a place in religious communities. Indeed, curiosity and doubt often lead to stronger faith, rather than weakening it. And for many scientists the curiosity and doubt that drive their work studying the natural world lead to a sense of awe — “the feeling of being in the presence of something that transcends our understanding of the world.”

Perhaps the most important chapters are the ones on humility and shalom. The chapter on humility is a reminder to be aware of the limitations of our understanding, abilities, and perspective — something we all need to be reminded of occasionally. The chapter on shalom is a reminder that science and the church are already working toward similar goals including better stewardship of the environment and issues of racial justice.

Why Science and Faith Need Each Other by Elaine Howard Ecklund is a helpful resource for those working toward a resolution of the conflict between science and faith communities. 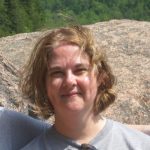 Julie Reynolds, Ph.D. is a research scientist at Ohio State University where she studies how insects adapt to extreme environments. She is also a Christian who seeks to be an active participant in the dialog between religions and scientific communities. In her free time she is a mother of twins, soccer fan, and wearer of many hats. Find her on Twitter: @juliereynolds42