The beautiful cover of Angelicus, a dark-haired angel in a pensive mood, is symbolic of one of the central ideas woven through the poems in Angelicus– the enigmatic nature of the angel. We cannot possibly visualize the true physical identity; we are only ever given glimpses. As if to illustrate this point, this particular angel is a woman.

As the poems develop, the themes enlarge to encompass how little we know of heavenly matters, or how little we think of such matters at all, compared to how angels think of us- “children of clay”. We often fail to realize these ‘Messengers of God’ are ever present in our lives, as we supposedly live our lives ‘Coram Deo’, ever present before the Lord. They– invisible or revealed– are watching, observing, waiting to do God’s will, and are now telling their stories, giving us glimpses of their fascination with the way we live our lives and how they see our journey in this life.

The poet’s use of the ampersand is demonstrated very aptly in his previous book of the same name. He uses gaps for pauses, rather than commas and full-stops (periods), and this makes each poem flow more easily when read, especially aloud, allowing visual and aural senses to act together to heighten the joy of reading these poems. I regard this technique as the poet’s way of pointing out to me the reader, the words he wants me to treat as important are those which I read onwards. His use of assonance and alliteration also draws the ear and thoughts to the way he feels about a subject. He plays with words, in the manner of a juggler, tossing them around in our minds until they land, safely and precisely where he wants them. But what fun watching them spin! This is particularly evident in his descriptions of a toddler learning language, “‘flailing fingers fail…  gurgle & burble… blabbers  jabbers.”

His method of juxtaposing words illustrates the poets, or in this case perhaps, the angel’s opinions and feelings.
“Consider the birds   the flocks & herds ”   and   “I’m sent to the bent”

I like the way he has laid out the length, gaps and measure of his lines in the poems visually on the pages, the rhyming being only obvious on reading, such as:

and
“For the faithful there’s nothing to fear   & since
you know who steers your craft    do you really need to ask? ”

Also
“Why   O child of clay   would any artist   of sobriety
think such bunk    should flutter across church ceilings
to clutter congregants’ pliable minds   with such angelological junk
revealing a lack of serious piety    like some Bacchanal drunk?”

The general rhythm of his words compels me to read the same poem over again, just to savour its ‘feel’.  As each poem can stand alone, many have been published (see acknowledgements) as single poems in various well-known publications. So one can pick any single jewel at a time from the jewelry box of poems and wear it until the next time a poem is read.

Despite the seriousness of the subject matter, D.S. Martin’s humour is apparent. One delightful poem portrays ‘The Maker’ and his angels watching us as we learn to fly (‘Learning to Fly’). The words from ‘The Maker’ provide a sense of His saying ‘Watch this’ as we flail around, and it is easy to imagine a nudge in the angels’ ribs as they laugh. In ‘Your Cat Watching’, the cat, the only being in the room of a pious family actually capable of seeing the angels who are watching, is simply considered weird. Again, in ‘Thoughts about Laundry’, there are angels at play, depicted as angels dwelling in ‘the Light’, full of joy.

The very entertaining piece which takes 2 Kings 2 into the 21st century, ‘Swing Low Sweet Grocery Cart’, is once again a fine example of the poet playing with words and letting his imagination roam.

At the beginning of the book, in “Of Angels Speaking,” we are gently introduced to the concept that communicating the divine ‘on the wing’ to we mortals in our own language and in a way that we can understand is difficult. As mortals, we can empathise with this as we too try to grasp the ‘height, width and depth’ of God. This is clearly not meant to be intimidating, nevertheless:

Our journey towards understanding continues as angels try to grasp why we love material things so much when the planet itself has been given to us as a gift, such as

“…before they talked to their cars
some of them even talked with God.”

This highlights our arrogance at how we take such gifts for granted, and the sheer ignorance of the power and majesty of God. This is apparent in “Angel of Revolution”, “Polar Bear (reflected in the eye of an angel)”, and in various stanzas of others,

And
“But now     when he inquires after his due
the ungrateful children               of his once faithful tenants.    wonder who.
he is to ask anything of them     as though the vineyard just rose
from the terrain     & they’ve made it grow
Oh how discomforted they will be      when he tears down its walls
& commands the clouds      to hold back their rain ”

The angels comment on many well-known literary figures, the Bible itself notwithstanding, such as Elizabeth Barret Browning (and her twenty-second sonnet), William Blake, Milton, and Dante among others; Likewise they comment on famous paintings such as Caravaggio, Cimabue  and Signorelli. One angel gets quite annoyed at fat angel babies in the poem “Putto Putto Putti.”

Various angels introduce themselves according to their mission- such as intervention, liberation, ministering, avenging, merciful, guardian- or in manifestations, related in the Bible. Various social ills are illustrated from their viewpoint in poems such as “Guardian Angel in the Dominican Republic” with commentary on climate change in “Polar Bear”, and greed in “Avenging Angel.”  “Jacob wrestles” has a quote from the U2 song “Bullet The Blue Sky” where the boundaries of God/Man are blurred and questioned in Genesis 32:22 and Hosea 12:3.

We are also questioned by angels on our own perception of God, our faith, our “confident doubt”, and our measure of obedience. Many questions we ask ourselves are also pondered  as seen in “An Angel Questions our Questions”; the concepts of predestination, the fall, acts of God, and disobedience of Lucifer are asked.  We are challenged as a church in “The Angel of the Church of Toronto writes” and to think for ourselves in “An angel addresses a Churchgoer”.

The angels’ view of nature, rain, birds, the early morning. Their personal view as they watched the stone roll away, the 11 men looking upwards as Jesus left them, the time of Eden, pervades throughout. In all poems, the angels are present and observing.

As I personally read through the poems, with the many facets of being an angel, their observations and thoughts, I begin to catch a glimpse of the divine purpose of my own life, recognising that “there are more things in heaven and earth…” and to acknowledge the power and majesty of God. I am also confronted with God’s amazing creativity given to us, the importance of obedience, and the challenge of this world of “me”.

At the beginning of the book, the mystery of Jacob’s ladder is described in a quote from Li-Young Lee, the ladder from heaven to earth, which seems to me, rather long. Apart from the delight of reading good poetry, and thanks to God’s grace, reading and reviewing this book has shown me another rung up that ladder to heaven and fulfilled for me the poet’s wish quoted in the preface “Soli Deo Gloria.” 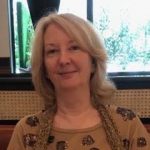 Rena Ong, originally from the UK, has lived in Singapore for 37 years. She is married to a Singaporean husband with an adult son living in Australia, and is now a recently-retired teacher of young children with dyslexia. Her poems are found in the “Mingled Voices” anthology editions 4 and 5 (from Proverse Hong Kong) and long-listed for Fish Publishers’ 2020 anthology in Ireland. Her work can also be found online at “Poems for Ephesians.”