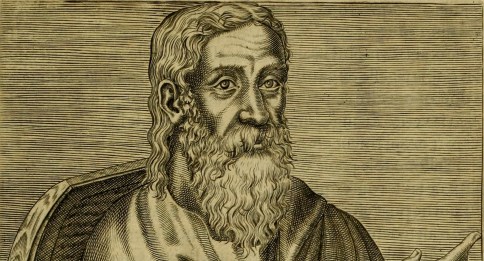 Clement of Alexandria (c. 150 – c. 215), was a Christian theologian and philosopher who taught at the Catechetical School of Alexandria. A convert to Christianity, he was an educated man who was familiar with classical Greek philosophy and literature. As his three major works demonstrate, Clement was influenced by Hellenistic philosophy to a greater extent than any other Christian thinker of his time, and in particular by Plato and the Stoics. Among his pupils were Origen and Alexander of Jerusalem. (via Wikipedia)

In honor of his feast, we offer the following thought-provoking excerpt from his work…

The Christian Alone is Rich
Clement of Alexandria

(an excerpt from The Instructor,
available in full in
Ante-Nicene Fathers, V2)

Riches are then to be partaken of rationally, bestowed lovingly, not sordidly, or pompously; nor is the love of the beautiful to be turned into self-love and ostentation; lest perchance some one say to us, “His horse, or land, or  domestic, or gold, is worth fifteen talents; but the man himself is dear at three coppers.”

Take away, then, directly the ornaments from women, and domestics from masters, and you will find masters in no respect different from bought slaves in step, or look, or voice, so like are they to their slaves. But they differ in that they are feebler than their slaves, and have a more sickly upbringing.

This best of maxims, then, ought to be perpetually repeated, “That the good man, being temperate and just,” treasures up his wealth in heaven. He who has sold his worldly goods, and given them to the poor, finds the imperishable treasure, “where is neither moth nor robber.” Blessed truly is he, “though he be insignificant, and feeble, and obscure;” and he is truly rich with the greatest of all riches. “Though a man, then, be richer than Cinyras and Midas, and is wicked,” and haughty as he who was luxuriously clothed in purple and fine linen, and despised Lazarus, “he is miserable, and lives in trouble,” and shall not live. Wealth seems to me to be like a serpent, which will twist round the hand and bite; unless one knows how to lay hold of it without danger by the point of the tail. And riches, wriggling either in an experienced or inexperienced grasp, are dexterous at adhering and biting; unless one, despising them, use them skillfully, so as to crush the creature by the charm of the Word, and himself escape unscathed.

But, as is reasonable, he alone, who possesses what is worth most, turns out truly rich, though not recognized as such. And it is not jewels, or gold, or clothing, or beauty of person, that are of high value, but virtue; which is the Word given by the Instructor to be put in practice. This is the Word, who abjures luxury, but calls self-help as a servant, and praises frugality, the progeny of temperance. “Receive,” he says, “instruction, and not silver, and knowledge rather than tested gold; for Wisdom is better than precious stones, nor is anything that is valuable equal in worth to her.”  And again: “Acquire me rather than gold, and precious stones, and silver; for my produce is better than choice silver.”

But if we must distinguish, let it be granted that he is rich who has many possessions, loaded with gold like a dirty purse; but the righteous alone is graceful, because grace is order, observing a due and decorous measure in managing and distributing. “For there are those who sow and reap more,” of whom it is written, “He hath dispersed, he hath given to the poor; his righteousness endureth for ever.”  So that it is not he who has and keeps, but he who gives away, that is rich; and it is giving away, not possession, which renders a man happy; and the fruit of the Spirit is generosity. It is in the soul, then, that riches are. Let it, then, be granted that good things are the property only of good men; and Christians are good. Now, a fool or a libertine can neither have any perception of what is good, nor obtain possession of it. Accordingly, good things are possessed by Christians alone. And nothing is richer than these good things; therefore these alone are rich. For righteousness is true riches; and the Word is more valuable than all treasure, not accruing from cattle and fields, but given by God–riches which cannot be taken away. The soul alone is its treasure. It is the best possession to its possessor, rendering man truly blessed. For he whose it is to desire nothing that is not in our power, and to obtain by asking from God what he piously desires, does he not possess much, nay all, having God as his everlasting treasure? “To him that asks,” it is said, “shall be given, and to him that knocketh it shall be opened.”  If God denies nothing, all things belong to the godly.