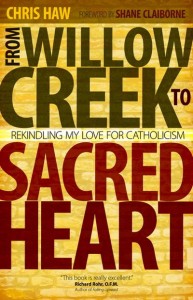 From Willow Creek to Sacred Heart

Chris Haw’s newest book, From Willow Creek to Sacred Heart, recounts how his pursuit of a Christ-like life led him to convert to Catholicism through the Sacred Heart parish of Camden, NJ. Though subtitled “Rekindling my Love for Catholicism,” this book is not an idealistic or triumphal story of an evangelical’s quest for the true Church.  Instead, it’s a gritty memoir of Haw’s own journey of discipleship in very different but very specific contexts.  Part One tells the story of Haw’s own spiritual journey: a childhood in a Catholic parish in Ohio, the blooming of his faith in the youth program of a suburban megachurch, education and anti-war activism at Eastern University, all the way to his migration to the inner-city.  Part Two presents Haw’s theological musings not as abstract apologetic arguments, but as authentic reflections of the questions Haw asked with his feet firmly on the ground in Camden.

What makes Haw’s journey, and thus the entirety of From Sacred Heart to Willow Creek, unique is Haw’s combination of action and contemplation. A season spent studying environmental degradation in the jungle of Belize instilled in Haw a love of creation which, in time, led to both an appreciation for the sacraments of the Church and a deep hunger for environmental justice. Haw’s careful study of various Catholic contemplatives and activists led him to both an intellectual conviction in favor of Catholicism, and a practical commitment to sacrificially love a broken neighborhood. Meditating on the image of Christ on the cross reminded Haw both of “the day we collectively tortured and murdered God” and “images of Iraqi civilians bleeding to death” (88).

Haw’s most consistent dialogue partner in the book is G. K Chesteron.  Haw admittedly quotes liberally from the prolific British convert to Catholicism, but Haw’s own story shows just how much of Chesterton’s thought Haw has internalized.  For instance, in the book Orthodoxy, Chesterton writes of a depressed and blighted neighborhood in London known as Pimlico.  The only way to heal such a slum, Chesteron contends, is to simply love it.  Haw quotes the passage at length, replacing Pimlico with Camden to demonstrate why he took the dramatic step of moving into the seemingly hopeless neighborhood:

It is not enough for a man to disapprove of Camden: in that case he will merely cut his throat or move to Chelsea.  Nor, certainly, is it enough for a man to approve of Camden: for then it will remain Camden, which would be awful.  The only way out of it seems to be for somebody to love Camden: to love it with a transcendental tie and without any earthly reason. . . . If men loved Camden as mothers love children, arbitrarily, because it is theirs, Camden in a year or two might be fairer than Florence. (74-75)

Reflecting on his conversion to Catholicism, Haw applies this same optimistic love to the Church. In the chapter entitled “On Being Part of a Terrible Organization,” Haw repeats the same passage from Chesterton, but replaces Pimlico and Camden with the Church (177).  The human institution of the Church appears broken and flawed, but we are called to love the Church into her true glory.  Haw has seen the Church’s dark sides, but, referring again to Chesterton, he knows “there is no enduring way forward except with a sort of ‘fanatical pessimism and fanatical optimism’ combined” (205).

The liturgical practices of Haw’s parish provides several examples of this dual pessimism and optimism, and Haw returns to them many times in the book, suggesting that the liturgies they celebrate bring Christ’s resurrecting power “into physical reality and practice” (p. 203).  In one example, parishioners walk through the streets of the neighborhood praying the Stations of the Cross as they remember the murders which have taken place in Camden that year. Haw reflects:

. . . we walk amid abandoned factories and imploding homes, seeing the scars on our landscape, air, and soil. We walk in prayer past drug dealers, some of whom may have participated in shootings around town.  They awkwardly stare.  At times, I have stared back.  The hope and desire for a new world is elevated into anguish in this dolorous walk on Good Friday (197).

Chris Haw’s From Willow Creek to Sacred Heart should inspire a similar boldness and hope in all who pick it up. Whether or not this book leads readers to Catholicism, it will surely lead them closer to the both the sufferings and glory of Christ who is the Head of the Church.

Christopher Brown is a pastor, barista, and writer in Pittsburgh, PA.  He writes at http://christopherbrown.wordpress.com.