“Was Emily Dickinson a Christian?” The anxious question came like clockwork every time I taught Dickinson’s poems to a class of Bible college students. Beneath their concern for the eternal state of a poet they admired lay another question: why should Christians read these poems of deep struggle with God, poems that edged dangerously close to blasphemy?

In his short book Mystical Prayer: The Poetic Example of Emily Dickinson, Charles M. Murphy addresses these same questions. He would tell my students that Dickinson possessed “believing unbelief,” a staunch rejection of anything in her Puritan heritage that failed “to do justice to what we know to be the truth: that heaven is not supposed to hurt and humiliate” (16). Murphy categorizes her work not as lyric poems but as mystical prayers that chronicle the poet’s struggles with God.

Murphy positions Dickinson in company with the mystic saints, especially Teresa of Avila, who knew that prayer is more than simply listing our requests to God. In mystical prayer, we express our soul’s unslaked thirst for God, surrendering to his purposes and love, but the journey is just as likely to lead into darkness as into light. Mother Teresa of Calcutta “experienced God in a profound darkness of absence,” a “nothingness” that only faith can bridge as it steps forward without a safety net (22). Dickinson’s path joins the saints’ here at the fathomless abyss where she glimpses an indifferent God instead of a loving Father. Rather than cower in fear, Dickinson wrestles with God like Jacob.

Murphy’s work possesses value as a basic primer on mystical prayer, but his commentary on Dickinson’s poetry raises eyebrows. He draws several thought-provoking parallels between Dickinson and the mystics, explaining how they nurtured their prayer lives by cultivating solitude, asceticism and a sense of place. The parallels, however, disintegrate even while Murphy constructs them. He admits that Dickinson’s solitude allowed her to connect with her true self but did not enable her to “feel the love of God within her, nor can she identify who God might be, he is so aloof” (42). Coming to understand ourselves is an essential part of prayer, but if we never move beyond ourselves to know God, our prayers have failed.

Similarly, Murphy admits that “Dickinson’s personal asceticism was only partially successful,” for unlike the martyrs who found God in losing everything, Dickinson continued to experience his absence (55). Seeking God in nature, Dickinson found “premonitions of her own mortality and ultimate extinction” rather than a revelation of God’s gracious sovereignty (67).

Murphy tries to redeem his shaky parallels by asserting that Dickinson’s doubts gave way to “‘a new poetry of faith’” in her later years (69). Flailing in a quagmire, he relies solely on Dickinson biographer Cynthia Griffin Wolff, (author of Emily Dickinson, A.A. Knopf, 1986) quoting her phrase directly and following her interpretation of just two poems to prove his point. Wolff herself discusses a handful of poems that could indicate a softening attitude toward God or simply the mellower perspective that maturity brings. Wolff and Murphy both ignore poems from Dickinson’s later years that continue to express “bland uncertainty” over her final destiny, her sense of being “molested” by “immortality” everywhere she turns, and her horror over an “Approving God” who looks mildly on while frost beheads a flower (Poems 1646 and 1624).

Murphy emphasizes the comfort Dickinson garnered from the doctrine of Christ’s incarnation. In his most egregious interpretation of her work, he asserts that “Title Divine, is mine!” expresses Dickinson’s unity and exaltation with Christ in their mutual sufferings. He ignores the haunting uncertainty of the last line: “Is this – the way?” Whatever comfort Dickinson found in the incarnation seems to come from her sense of kinship with the perfect human being who suffered unjustly at God’s hands, not awe and gratitude to a Savior.

Rather than relying on Wolff’s work, Murphy may have served his readers better by referring to an earlier critic, Theodora Ward, granddaughter of Dickinson’s friend Dr. Holland and assistant to editor Thomas H. Johnson. In her book, The Capsule of the Mind, Ward asserts that, “The glimpses of immortality she had been given all through her life in moments of ecstatic insight from an unknown source had never become for her a solid foundation for faith in conscious life after death” (110). Ward brings us full circle to Murphy’s original point that Dickinson was a believing unbeliever, someone who couldn’t swallow Calvinism but never absolutely refuted God’s existence either.

Although lacking depth, Murphy’s work does renew the perennial question: why should Christians meditate on Emily Dickinson’s poetry? Perhaps the answer lies somewhere between the optimistic critics who hope against hope that Dickinson was “saved” and the pessimists who defend her eternal skepticism.

On one hand, the weight of critical evidence and of careful explication of the poetry itself cautions against categorizing the poems as mystical prayers. Helen Vendler, another critic Murphy frequently quotes, concludes that “All of Dickinson’s poems that resort to Christian imagery and language rework Christianity in some way – intellectually, blasphemously, or comically” (Dickinson: Selected Poems and Commentaries, 16). We must question, therefore, whether Dickinson herself would have called her poems mystical prayers, considering that she seldom if ever addresses her poems to God directly. Comparing them to her love poems where she pleads intimately with a human lover reveals the difference starkly (Wolff 386).

On the other hand, Murphy comes closest to answering the question when he says, “Dickinson’s poetry is in part a corrective to the coercive religious revivalism of her time” (108). Her poetry is also a corrective to the religious apathy of our time. In poems like “At Half past Three, a single Bird,” Dickinson hints that God’s absence doesn’t mean he is gone for good. She gives us a glimpse of him as he steps momentarily away from his creation, leaving us breathlessly on tiptoe, hopefully anticipating his return and burning with regret over his departure. In teaching us to long for God, Dickinson stabs us with discontent over the “center” of tidy doctrines our faith rests upon (Poem 680). Instead of seeking a God we can bring down to our own level, she urges us to probe the “circumference” of awe-inspiring mysteries that surround the Holy One (Poem 1084). 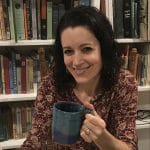 Erin Ensinger was an English professor at Cairn University before becoming a homeschooling
mom of two daughters. She is the editor-in-chief of Authenticity Book House, a ministry for
Tanzanian pastors. She also runs The Little Library in the Big Woods, a private lending library
for homeschooling families.