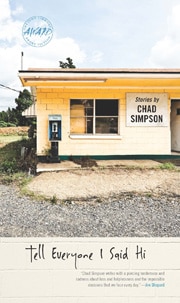 Tell Everyone I Said Hi: Stories

Perhaps you’ve said it yourself: “Tell everyone I said ‘hi’.” Or you’ve heard someone say it. In either case, lives have gone their separate ways. In happier cases, both individuals have moved on to better things, but occasionally that’s not the case. Maybe one has moved on, leaving the others behind. Maybe the one is who was left behind and now longs for those better, bygone days. In any case, life has somehow dictated separation.

Chad Simpson’s slim collection of short stories collectively speak to this idea, this condition of separation, be it physical, emotional, or even potential. The stories average fewer than ten pages long—although many are only a few pages—giving the impression, which short stories are uniquely able to, of glimpsing into strangers’ personal lives. In this case, the effect is similar to yet the opposite of watching people at the airport: rather than witnessing happy reunions or bittersweet departures, we view lives already (or in the process of being) separated and, in some cases, on their way to being reconnected.

In the title story, situated in the middle of the eighteen stories, the narrator is speaking directly to his former girlfriend, who is now engaged to a guy named Ted. The narrator, meanwhile, spends his time drinking, hanging out with his friend Clover, and musing how things might have turned out differently. Other stories tell the tales of a now successful lawyer imagining the son he never had with a former lover, a roofer separated from his wife and daughter, and a couple deciding what to do with their foster son now that they are pregnant.

Among the more evocative stories in the collection are two that deal with a father and daughter following the death of Marcella, the wife and mother. The first story begins, “My twelve-year-old daughter Peloma kept trying to kill herself.” While short fiction often relies on people behaving badly, the father in these stories is well-intended and likeable. He sends Peloma to a counselor and regularly, and only half-jokingly, checks up on how she’s doing using the pithy one-to-ten rating system the counselor uses with the daughter.

The sadness at the heart of this story is not—like many stories—that the father is totally clueless; rather, he knows what he wants, it’s just that he can’t have it. After Peloma’s second suicide attempt, he writes, “I sat in the dark and wished hard that Marcella were around. I wanted to ask her how she dealt with puberty when she was Pell’s age. I wanted to know how she’d acquired the confidence she had when I’d met her and how I could help give that same confidence to Peloma. I wanted to ask her what she knew about dealing with loss and grief.”

The ending of this one story alone is worth checking out the book. The second story featuring these characters centers on a very typical experience for most parents—the child learning to drive—taken to another level, given that Marcella died in a car accident. In this case, and provided the context of the collection, the experience not only speaks of the anxiety and separation most parents would understand, but of connection and hope as well.

Although a few of the stories are of the more opaque, literary style that some readers find unsatisfying and distasteful about the modern short story, most are readable and memorable. Thus even for readers who don’t normally read short story collections, Chad Simpson’s Tell Everyone I Said Hi is a worthy read.