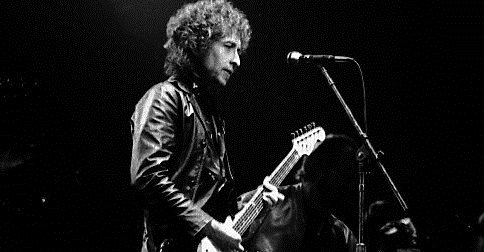 “I hold a beast, an angel, and a madman in me,” said Dylan Thomas (the poet who inspired Robert Allen Zimmerman to legally change his last name at 19), and perhaps Bob Dylan’s poetry and music has achieved its legendary, timeless status by encompassing those three parts of the human experience so well.

*** For a limited time, the ebook
[easyazon_link identifier=”B005EZCO9Q” locale=”US” tag=”douloschristo-20″]The Gospel according to Bob Dylan[/easyazon_link]
by Michael Gilmour is only $1.99 for Kindle!

(Albums arranged in the order they were released… )

In 1963, only two years after having been discovered by Columbia Records and after having produced his first (and strikingly unsuccessful) album Bob Dylan, Dylan produced the album for which he received the title, “A spokesman of a generation” and which, in 2002, was one of 50 albums that the Library of Congress added to the National Recording Registry: The Freewheelin’ Bob Dylan.

At the age of 21, he had already started to make a name for himself within the rising Civil Rights Movements of the 1960s by appearing alongside Joan Baez in the August 28, 1963 March on Washington as the politically charged songs “Oxford Town” and “Masters of War” represent. He cited his initiation into political activism to his radically leftist girlfriend Suze Rotolo, and his mournful songs of lost love “Don’t Think Twice, It’s Alright” and “Honey, Just Allow Me One More Chance,” are attributed to her leaving for Italy. Namely, this album represents Bob Dylan as he was at 21—full of whimsical humor, poignantly raw heartbreak, and a passion for change—before his more jaded, darker representations of love and politics in The Times They Are A-Changin’(1964) (hinted at in “Master’s of War”).

You can see Dylan performing “A Hard Rain’s A-Gonna Fall” (featured on this album) here: