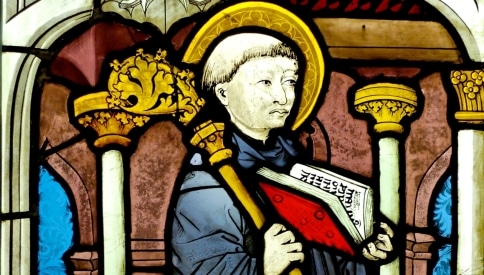 This week marks the feast day of the renowned theologian and Benedictine monk, St. Bernard of Clairvaux …

This week’s FREE ebook download is the Bernard of Clairvaux biography:

Bernard of Clairvaux:
The Times, The Man, and His Work
by Richard Storrs

Bernard of Clairvaux  (1090 – 20 August 1153) was a French abbot and a major leader in the revitalization of Benedictine monasticism through the nascent Order of Cistercians. He was sent to found a new abbey at an isolated clearing in a glen known as the Val d’Absinthe, about 15 kilometres (9.3 mi) southeast of Bar-sur-Aube. According to tradition, Bernard founded the monastery on 25 June 1115, naming it Claire Vallée, which evolved into Clairvaux.

Bernard’s theology continues to be of major importance, particularly within the Cistercian and Trappist orders. Bernard led to the foundation of 163 monasteries in different parts of Europe. At his death, they numbered 343. His influence led Alexander III to launch reforms that led to the establishment of canon law. He was the first Cistercian monk placed on the calendar of saints and was canonized by Alexander III 18 January 1174. Pope Pius VIII bestowed on him the title “Doctor of the Church”. He is labeled the “Mellifluous Doctor” for his eloquence. Cistercians honour him as the founder of the order because of the widespread activity which he gave to the order. (via Wikipedia)

Bernard of Clairvaux:
The Times, The Man, and His Work
[ DOWNLOAD NOW ]