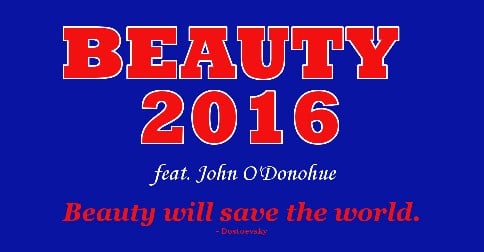 Part 1: Our Greed, the Nemesis of Beauty

I’ve recently been listening to the audiobook edition of John O’Donohue’s Beauty: The Invisible Embrace, and have been struck by the insights that the late Irish poet offers to our present election season in the United States. I first encountered O’Donohue’s work through his On Being interview with Krista Tippett, which I highly recommend if you are not familiar with his work.

Over the course of a few posts, I will reflect on O’Donohue’s thoughts and their relevance to the current presidential season.

CAVEAT: Although I will be deeply critical of both major party candidates, I urge readers to vote (or not) according to their conscience, asking which course of voting would most likely promote the possibility of beauty and flourishing in the years to come. But even more, I am advocating for a politics of beauty that would saturate our engagement in all levels of politics and transform the ways we think about the ends toward we our communities and nations are moving, and the virtues and practices that are driving us in this direction.

NOTE: For those who want to read along, I will be working from the audiobook edition, which varies slightly from text editions of the book.

“Our times are riven with anxiety. The natural innocence and trust that we had in our sensibilities in the Western world has been broken. The innocence is lost, and we know now that anything can happen from one minute to the next. We live in very uncertain times. Politics cannot help us because it has become synonymous with economics. Religion has got into the mathematics of morality. And economics itself, as the presiding world ideology, has become radically uncertain.  I believe that now is the time to invoke and awaken beauty because in a sense there is nowhere else left to go and because the situation in which we are in has actually been caused substantially by our denial of beauty. In a way, all of the contemporary crises can be reduced to a crisis about the nature of beauty itself. When you look at postmodern society, it is absolutely astounding how much ugliness we are willing to endure.”  – John O’Donohue

Our times are indeed riven with anxiety. We face the ever-present threat of violence at home and abroad. We are reaping the fruits of the violence that our nation has spread around the world, since its earliest days: violence in our homeland against Native Americans, Blacks, the violence of broken families and dissolved communities. These anxieties, without a doubt, have led to the nomination of both major party presidential candidates. But these candidates, as O’Donohue alludes, cannot help us. One candidate may better represent the possibility of future beauty and flourishing, but both candidates are driven by their own economics — that is to say, their greed.  Hillary Clinton is a tool of big business; her campaign has largely been financed by banks and other wealthy stakeholders that have a stake in maintaining the economic status quo.  Donald Trump on the other hand, is much more blatantly a tool of his own ego and personal greed. He knows little else except the bloody machinations of the marketplace. He naively thinks he can run our nation, as he has run his businesses, and although might be attractive to some voters it will ultimately fail because politics is more than the aggression of free-market economics, it requires finesse and diplomacy, two virtues that are sorely lacking, if not absent in Trump.

“If developers … could attend to the call of beauty what a difference it would make to the way our towns and cities and buildings actually appear and the level of presence that would be in them. Unfortunately, there is a great coarseness to our times. You see this coarseness in perception, in language, in behavior, in the way we hold life and the way that we are toward each other. Some kind of greed has gotten into our perception, and this is the opposite of what beauty is because greed can only look at things as potential products, possessions and commodities, whereas the sense of beauty is a sense of that which is eternal, which is subtle and which is invisible, and that which really matters behind the blur of appearances. Beauty is not a deadener, but a quickener, and it alerts and awakens our hearts to that which is true and good and unified. And we turn away from beauty sometimes because of embarrassment, because of resentment or fear or blindness. We seem to rest in that which is artificial and dull.”  – John O’Donohue

Again, this greed has flooded our nation and indeed the present election. Everything — including the presidency — for Trump is a product to be seized, and Clinton although perhaps more subtle, is little different in this regard (at least she kept a low profile as she colluded with the leaders of her party to subvert the democratic process of primary elections). To what extent are we ourselves driven by a similar greed in our daily lives (and in the logic by which we choose the candidate who will get our vote), preferring our own personal comfort and success to the pursuit of the common good for all people, even those that American society continues to marginalize?

The first shift to a politics of beauty is to confess the ways in which we our driven by our own greed and lust for comfort. Wake up! We can no longer rest “in that which is artificial and dull,” the bitter fruits of our individual greed. We need, as O’Donohue alludes, to learn to love and to be present to all our neighbors. We need to imagine a society — beginning in our own streets and neighborhoods — that is rooted in beauty and the structure of which orients us toward that which is good and true and unified (as, I would add, God has intended creation to be).

Stay tuned for additional segments in this series…