If you’re looking for a light read, White Knuckle Love: A Memoir of Holding, is not your book. On the first page, we are sitting behind a hospital emergency room curtain with a dead two-year-old. His grandmother is howling, “God is an asshole!” And April Stace has to agree. Welcome to the world of a thirty-something Baptist pastor who is reinventing herself as a chaplain, after ending her fifteen-year marriage to come out as gay and moving to New York for a senior church position that promptly imploded.

April Stace is a spiritual wrestler rivaling Jacob, and her memoir is a rough and tumble tale of her struggle with God and life. We are right in the ring with her as she moves from real-time struggles with vocation, religion, and finances, through flashbacks of battles with her family, her sexuality, and various religious and academic institutions.

April had hoped hospital chaplaincy training might be “a good bandage on a life that was falling apart,” but soon discovered that chaplaincy only exposed her wounds. “Spiritual care depends on the ability to join another person in their pain — and if I am unknowingly trapped in my own pain, I cannot do my work,” she writes. As she listens to her patients, she finds herself “relentlessly listening to the voices inside myself that I’ve been avoiding my entire life.” When you read April’s stories of fear, shame, anger, and self-doubt, don’t be surprised if a few of your own inner voices pipe up. Mine sure did.

You get the feeling April’s okay with a reader’s discomfort. She’s not here to make you feel good, she’s here to talk about real life. Rebounding from her family history of secrecy and shame, she seeks to be a bold truth-teller, her tone at times raw and hurt, at times defiant and challenging, but always vulnerable and authentic. She almost dares you to come along on her journey. And what a journey it is. I cringed as she tried to protect her child from flaring tempers in a crowded subway, cried as she led Christmas carols in a psychiatric ward, and rejoiced in her new-found freedom at a lesbian dance club.

During her yearlong experiment with being a chaplain in New York — first an unpaid internship and then a residency — April revels in the spaciousness of being clergy for “the most-inclusive and least-boundaried religion in the world: the religion of providing presence and comfort.” The Reverend Doctor finds she is “falling in love with God-talk again.” Before long, though, she’s questioning her choice. “There is only sickness and death, and the hollow rattling sound of human disintegration up and down the bare white hospital walls.”

As she trudges hospital corridors and slushy New York streets, she’s like a tireless priest swinging her incense burner this way and that, catching a scent of grace or truth, but then not sure she smelled anything at all. Yet she keeps the flame burning as she swings between miraculous recoveries and untimely deaths. “I am waiting in the unbearable tension of joy and grief, of hope and despair, of death and resurrection. These are the realities I’m called to witness with patients in my work, and they are the realities I must witness in myself.”

April’s story is grounded largely in her interactions with patients. Each person is drawn with deep compassion and connection: a used car salesman, a recovering alcoholic, grieving parents, an AIDS patient with a flare for drama. They become her teachers. As April reflects on her past, she finds personal meaning in their stories and begins to unpack her questions of identity and value. At times I felt stuck in her constant questioning, but the undulating narrative arc fits the content of the story and reinforces the mood. Anyone who has experienced even mild depression will be familiar with the cyclical feelings evoked by her writing.

April adds depth to the story by recounting her history with her ex-husband Nuc, the challenge of co-parenting their young son Luke, and conversations with the friends and coworkers who keep her afloat. In the midst of an often-heavy read, I welcomed the hope embodied in April’s budding relationship with Lou, a psychologist who was once a fundamentalist but now identifies as agnostic and genderqueer. The city itself is also a powerful presence, at times hot and stiflingly humid, at times cold and “death gray,” always oppressive.

I’d recommend White Knuckle Love to anyone who appreciates a story of resilience and transformation, particularly one that questions religious institutions and vocations. White Knuckle Love is a must-read if you’re considering chaplaincy, the pastorate, or other spiritual care-giving work. April’s observations on these vocations are unflinchingly honest but gracious, and her ability to uncover meaning in the mundane and transcendence in sorrow is inspirational.

A good chaplain, according to April, will “enter life’s darkest caverns with you and have the presence of mind to name those shadowy corners sacred.” It is a privilege to journey with April Stace as she visits her darkest caverns and names them sacred. 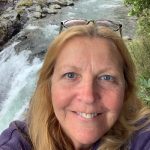 Melanie Lynn Griffin is a Maryland writer, teacher, and leader at Cedar Ridge Community Church. After a career in environmental advocacy, she now teaches at a Quaker school and leads writing workshops and contemplative retreats. She is a Certified Spiritual Director and holds a Masters in Writing from Johns Hopkins. Writing at melanielynngriffin.contently.com