The Courage Required to Resist Where We Need To

Freiheit! The White Rose Graphic Novel begins with a mystery. Two silhouetted figures walk behind a shadowy colonnade at the University of Munich. The year: 1943. Nazi banners frame the two as they climb stairs; the flags only hinting at being red. A woman bends to open a briefcase, revealing both her young face and the pages inside. The words are German, typewritten, and single-spaced. The man is nervous, he urges her to hurry. Obviously there’s a level of danger to what these two are doing, but she hesitates long enough to push a pile of these pages over a ledge. They flutter down the stairwell, bearing the words “We will not be silent.”

This is our introduction to the White Rose: “We are your bad conscience.”

These opening panels are dramatic, cinematic. Italian author and illustrator Andrea Grosso Ciponte hand-painted this promising start, intimating that the book is filled with high drama and historical accuracy. After all, he earned a reputation for doing so in 2017, with Renegade: Martin Luther, The Graphic Biography (Plough, 2017). His inspired illustrations enlivened the anniversary of the Protestant Reformation. Surely Ciponte could do the same for the White Rose, a story with inherently more intrigue. After all, the White Rose was a group of college students in Nazi Germany, martyrs for the cause of liberty and justice. Sadly, however important and necessary Freiheit is, the book takes more than a cursory read to appreciate.

Thrillingly, the intro ends with that omnipresent activist question: “If we don’t take that first step, then who?” Bam: that’s the seal of relevancy — the rhetoric that ignites passion for change in 2021 as it did in Nazi Germany.

That quote alone can explain the necessity of Freiheit! in this era, especially as a graphic novel. Politics and young readers’ content are two trends pushing an increase in graphic novel interest over the last year, and Freiheit! hits both. Freiheit! is aiming for the 12 and older crowd, roughly grades 7 to 9, though it’s better suited for older young adult or adult readers due to its challenging structure. Freiheit! comes with a high level of credibility — and a steep learning curve. Ciponte chose letters and diaries to propel the text. Any novelization that Ciponte had to do is integrated seamlessly. First-person accounts have been published before, notably in The White Rose: Munich, 1942–1943 (by Inge Scholl, a sister of the activists), and At the Heart of the White Rose: Letters and Diaries of Hans and Sophie Scholl (by Hans and Sophie Scholl).

But unfortunately, there is not enough stitching to connect fragmented scenes. Thinking, I’m not sure what’s going on, I kept returning to previous panels to compare characters, action, dates. These issues arise right after Sophie pushes the pages down the stairwell. Suddenly it’s 1942, and the reader follows Sophie from a pond to a train to a party in rapid succession. We meet characters quickly, but hear more from philosophers than we do the students themselves. The effect is disjointing, especially as one of the men quotes a Gottfried Keller over newsreel and narrative images. Ciponte is a crazy talented visual artist. Some of the drawings are so life-like as to mimic photography. Other times, the same characters are seemingly unfinished. While artistic and metaphorical, the effect is often confusing, along the lines of Is that Christoph? Hans? No?

In the same way, cues about flashbacks lay in shifts of color, a huge advantage of the graphic format. Done well, this is seamless communication to the reader. For instance, When Stars Are Scattered (by Victoria Jamieson and Omar Mohamed) uses oranges, reds, and purples when the narrator shares painful flashbacks. Another, the World War II novel White Bird (by R.J. Palacio), switches to mostly browns and sepia tones when explaining what school, home, and community were like in occupied France. Color changes in Freiheit! are much more subtle, and Ciponte rarely provides clarity through color (or shadow). The small dates in the corners of the pages are necessary for navigation, which is a bit tedious in his episodic bursts of narrative.

Would most readers give the book a full read if they were confused half-way through? Unsure. But Freiheit: The White Rose Graphic Novel deserves space and time for what it does offer, however imperfect. Why? Well, whether individuals have read the first-person accounts, imagery and philosophical questions of this graphic novel echo the works of Dietrich Bonhoeffer, Anne Frank, Elie Wiesel, and Corrie Ten Boom. The story of the White Rose should follow in the same breath, but for myriad reasons, it’s lesser known. Freiheit! is a welcome addition to the canon.

Furthermore, Freiheit! pushes factual stories about World War II to another generation of readers. World War II never seemed like ancient history to some of us. Maybe relatives spoke of the war from personal experience, or Holocaust victims visited students, gave interviews, or opened museums. Quickly though, as baby boomers become grandparents, a new generation is growing up less likely to stumble on Grandpa’s World War II Army jacket in a closet. They may have read a biography of Anne Frank, or maybe a high school class reads Elie Wiesel’s Night. The immediacy is lost, as well as the parallels of the White Rose students’ activism and their own. Freiheit!’s text burns with passion for freedom. “Offer passive resistance — resistance — wherever you may be,” one pamphlet urges. “Forestall the spread of this atheistic war machine before it is too late.”

Freiheit! The White Rose Graphic Novel can reflect and inspire the courage required to resist where we need to. Stories about young people’s resistance to power structures is empowering. Adults often ask younger generations to be their betters, to be redemptive to the world the grown-ups have messed up. And here the White Rose gives youth language: “We are your bad conscience.” 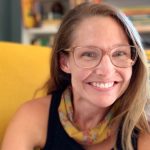 Erin F. Wasinger is a writer, speaker, and an elementary school “library lady," as well as our Contributing Editor Specializing in Books for Young Readers. Erin’s also the cofounder of Spark Writers of Southern Michigan, blogger for MadeleineLEngle.com, and author of The Year of Small Things: Radical Faith for the Rest of Us (Brazos, 2017). Find her online at: ErinWasinger.com