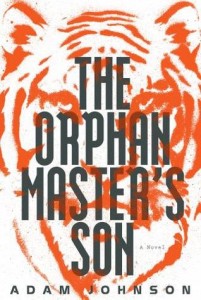 The Orphan Master’s Son: A Novel

Opening the pages of The Orphan Master’s Son whisks the reader far away from the comforts and familiarity of modern day America to North Korea.  As this setting is unfamiliar to most readers, author Adam Johnson takes his time to paint the scenes depicting this culture in order to draw in the reader and demonstrating the amount of research good writing demands. The Orphan Master’s Son has two distinct sections.  The first sets the stage for the story and introduces readers to the customs and government of North Korea.  The second section includes several unexpected twists and turns before bringing resolution to the story.

The first section, sub-titled “The Biography of Jun Do,” introduces readers to the main character.  While the reader meets the main character as a young adult, Johnson utilizes flashbacks to incorporate information describing this character’s formative years as well as to create a backdrop for the unfolding events.  Jun Do moves through a variety of government appointed careers which include going to Texas as a spy.  The story reminds readers frequently that what is considered normal, expected behavior in the book is the exact opposite of the western reader’s expectations.  The government controls individual lives and decisions including not only career decisions but also the selection of a mate. Characters think nothing of working together to fabricate an acceptable fabricated story in order to cover up events which could be seen as contrary to the government.  Then, the same characters are placed through horrific re-education procedures to test the veracity of their stories.  In scene after scene, reality is replaced by lies which must be presented as the truth in order to appease a person in a place of authority.  Yet, even one in authority could be replaced at any time, be given a new identity, or simply disappear.

When the second section of the book begins, the story turns to Commander Ga, a high ranking government official.  However, the narrator of the story varies between three distinct voices.  A third-person narrative describes the Commander’s home life while a first-person narrator who is a government interrogator adds details. Finally, the citizen loudspeaker shares a moralizing account of Commander Ga’s life designed to instruct listeners on what not to do. Author Adam Johnson skillfully moves back and forth between the three stories while simultaneously moving the plot along. As the story progresses, the story told by all three narrators unifies into a single conclusion.

Throughout the first part of the book, other characters frequently refer to Jun Do as an orphan, although he is quick to point out he had parents and knew his father.  Yet, his father treated him just like the other orphans, and even worse, to avoid the appearance of favoritism.  The repetition of this theme reminds readers the main character did not have a traditional family life or any model of a marriage relationship when interacting with other people. To compensate for this perceived deficiency, Jun Do studies other people in order to learn how spouses and families should interact.  In the second part, Commander Ga also studies others, yet in the end he demonstrates sacrificial love so that others may experience freedom.

As American readers, the frequent references to America as the enemy and the evils of democracy and capitalism are off-putting at first.  Readers quickly notice this information is spouted by the government using the citizen loudspeaker as a control mechanism.  Jun Do’s visit to Texas and interaction with a senator and other U.S. government officials nurtures his doubt in his country’s government and is crucial to his final choices.  A side benefit of reading The Orphan Master’s Son is a greater appreciation of the freedoms often taken for granted.  The Orphan Master’s Son is not a specifically Christian novel by any means.  Anyone approaching it as such will be promptly disappointed by an assault of vulgarities.  Most references to Christianity are included in the derogatory comments concerning America. In addition, the Bible is mentioned a few times in regards to a gift from the fine senator from Texas and some Bibles smuggled in from South Korea.  However, the final actions of the main character demonstrate a self-sacrificing love which many Christians would find difficult to emulate.  Adam Johnson’s The Orphan Master’s Son is recommended for mature readers and would be a source of rich book group discussion about the nature of culture and how cultures are formed and sustained.