That Which is Transcendent

30 Poems to Memorize (Before It’s Too Late)
David Kern, Ed.

30 Poems to Memorize (Before It’s Too Late) (hereafter 30 Poems) is a book that solicits questions. The title itself invites its readers to ask “why?” Why memorize a poem, when we can often find it online more easily? 30 Poems offers several compelling responses: a memorized poem “enters into your linguistic currency”(81). Memorized poems “point toward larger truths…they hang shining on [one’s] mental iconostasis”(101). As Editor David Kern notes in the preface, “to memorize is to inhabit and be inhabited by that which is transcendent”(x).

30 Poems offers another compelling reason to commit poetry to memory. A discussion of “Let Evening Come” by Jane Kenyon observes, “memorizing a poem is one of the purest ways to embody the experience of being quiet”(170-171). This invitation sounded especially appealing to me this year. I therefore decided I’d return to the poem later, and attempt to memorize it.

Including works from poets like Homer, Rhina P. Espaillat, and George Herbert, 30 Poems is a varied collection that spans centuries, native languages, and forms. Each poem includes a brief biography of the poet, as well as an exploratory essay about the piece. A wide slate of literary contributors such as Maurice Manning and Christine Perrin wrote the accompanying reflections.

Written for “a poetry novice or a poetry expert”(xi), 30 Poems offers “A Simple Guide to Reading Poems,” notes on scansion and rhyme scheme, and text boxes explaining terms and forms. While I appreciate these inclusions, I still found myself wanting additional reference materials. Anyone who reads a book with the “stout of heart”(xii) title 30 Poems to Memorize (Before It’s Too Late) will want to engage rhyme scheme beyond one paragraph.

The book at times also lacks in other ways. Though the roster of poets reflects laudable efforts toward diversity, the treatment of Black poets nonetheless feels hurried. At one point Robert Hayden is incorrectly named “Richard”(88). The biography on poet Paul Laurence Dunbar includes an unreferenced quote from his Black contemporary James Wildon [sic] Johnson; if this quote is indeed accurate, then it erases other Black poets like Phillis Wheatley (43).

Last year on Facebook, I (as a white woman) unknowingly cited an article that used the word “black” pejoratively. A Black colleague messaged me, and pointed out this offense. After fighting embarrassment, I listened to the Holy Spirit and corrected my original post, apologized to my Black colleague, and let her know how I had changed course. “Melanie, thank you for receiving [my feedback] with the gentle spirit in which it was offered,” she replied. She continued, “I believe we are called to do better.” Her courageous and gracious words have stuck with me.

Even as some sections of 30 Poems feel hasty, there are other portions that are deliciously ripe. The reflections on Robert Frost’s poems “The Road Not Taken” as well as “Stopping By Woods on a Snowy Evening” taste like rich wine. Brian Phillips gave me new food for thought as I ingested “We grow accustomed to the Dark” by Emily Dickinson, and I’m still chewing on Heidi White’s sage insights regarding art and legacy in response to “Sailing to Byzantium” by W. B. Yeats.

Yet other, sometimes problematic ambiguities remain. A few of the commentaries in 30 Poems do not satisfactorily justify why their poems should be memorized. Should the “joy of fighting” in battle (184) found in Shakespeare’s Agincourt Speech from Henry V actually be celebrated through memorization?

I also find myself rejecting the violent “linguistic currency” of “Holy Sonnet XIV” by John Donne, which begins with the line, “Batter my heart, three-person’d God,” and ends by desiring that God “ravish me.” As a survivor of #ChurchToo emotional abuse, I shake my head “no” when I read that “[the poem]…captures not only the poet’s discordant (though sincere) prayers, but our own as well”(41). Why would a reader want to memorize a discordant prayer that includes disturbing (and I’d argue inaccurate) reflections of God’s character?

My visceral reaction to “Holy Sonnet XIV” demonstrates how our bodies engage poetry. 30 Poems offers “six tips for memorizing poetry,” which include several cognitive tips, as well as advice to “write the poem out by hand…get your senses involved,” and “find (or record) a read-aloud version and listen”(xii). Based on this advice, I’ve started listening to The Daily Poem podcast, which is hosted by the book’s editor.

I appreciate these six tips, and would love to see them expanded. Actors commonly use practices like “walking the punctuation” to memorize lines. How can we teach our entire bodies, and not just our heads and hands, the muscle memory that may support our memorization of poetry? A related question: could another reason to memorize poetry include healing the same bodies that we may use to memorize it?

Because my own body craves answers to these questions, a thread of dualism that’s woven throughout 30 Poems proves to be concerning. One text I’ve memorized and affirm is the Apostles’ Creed, which declares belief in the “resurrection of the body.” I therefore reject the assertion that “we are eternal souls pent up in prisons of flesh”(162), which sounds more like Plato than Jesus. This dualistic mindset makes multiple appearances in 30 Poems.

Like my own attempts to memorize “Let Evening Come” by Jane Kenyon, 30 Poems feels like a work in progress. The lines “Let the cricket take up chafing / as a woman takes up her needles / and her yarn. Let evening come” have soothingly settled into my subconscious, and I give thanks to 30 Poems for bringing these verses into my life. The preface of 30 Poems explains that the book’s goal is to be a “jump-start,” and not an “end-stop”(xi); based on that benchmark, 30 Poems is certainly a success. But what about the gaps that remain in my own memorization attempts, as well as the ambiguities mentioned above? I trust that God will teach us what we need to know through one of those very ambiguities: our not-yet-resurrected bodies. 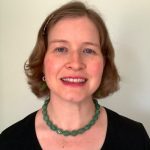 Melanie Weldon-Soiset is a poet and contemplative prayer leader who lives in Washington, DC. She has encountered God in varied places, including through an MDiv degree, living in China for five years, as well as her clubfeet. She now writes about current God encounters through poetry and prayer at melanieweldonsoiset.com.