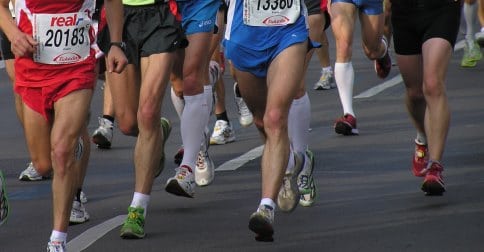 Here are our 25 favorite running books…

Divided into these four genres…

Born to Run: A Hidden Tribe, Superathletes, and the Greatest Race the World Has Never Seen

Isolated by Mexico’s deadly Copper Canyons, the blissful Tarahumara Indians have honed the ability to run hundreds of miles without rest or injury. In a riveting narrative, award-winning journalist and often-injured runner Christopher McDougall sets out to discover their secrets. McDougall’s incredible story will not only engage your mind but inspire your body when you realize that you, indeed all of us, were born to run.

An intimate look at writing, running, and the incredible way they intersect, What I Talk About When I Talk About Running is an illuminating glimpse into the solitary passions of one of our greatest artists.

Running with the Buffaloes: A Season Inside With Mark Wetmore, Adam Goucher, And The University Of Colorado Men’s Cross Country Team

In RUNNING WITH THE BUFFALOES, writer Chris Lear follows the University of Colorado cross-country team through an unforgettable NCAA season. Allowed unparalleled access to team practices, private moments, and the mind of Mark Wetmore–one of the country’s most renowned and controversial coaches–Lear provides a riveting look inside the triumphs and heartaches of a perennial national contender and the men who will stop at nothing to achieve excellence.

Eat and Run: My Unlikely Journey to Ultramarathon Greatness

In Eat and Run, Jurek opens up about his life and career as a champion athlete with a plant-based diet and inspires runners at every level. From his Midwestern childhood hunting, fishing, and cooking for his meat-and-potatoes family to his slow transition to ultrarunning and veganism, Scott’s story shows the power of an iron will and blows apart the stereotypes of what athletes should eat to fuel optimal performance. Full of stories of competition as well as science and practical advice—including his own recipes—Eat and Run will motivate readers and expand their food horizons.

For five years, no American runner could beat him at any distance over a mile. But at the age of 24, with his best years still ahead, long-distance runner Steve Prefontaine finally lost. Driving alone at night after a party, Prefontaine crashed his sports car, putting a tragic, shocking end to the life and career of one of the most influential, accomplished runners of our time.

The Perfect Mile: Three Athletes, One Goal, and Less Than Four Minutes to Achieve It

There was a time when running the mile in four minutes was believed to be beyond the limits of human foot speed, and in all of sport it was the elusive holy grail. In 1952, after suffering defeat at the Helsinki Olympics, three world-class runners each set out to break this barrier. Roger Bannister was a young English medical student who epitomized the ideal of the amateur — still driven not just by winning but by the nobility of the pursuit. John Landy was the privileged son of a genteel Australian family, who as a boy preferred butterfly collecting to running but who trained relentlessly in an almost spiritual attempt to shape his body to this singular task. Then there was Wes Santee, the swaggering American, a Kansas farm boy and natural athlete who believed he was just plain better than everybody else.

Running on Empty: An Ultramarathoner’s Story of Love, Loss, and a Record-Setting Run Across America

Featured in the recent documentary film, Running America, Ulrich clocked the 3rd fastest transcontinental crossing to date and set new records in multiple divisions. In Running on Empty, he shares the gritty backstory, including brushes with death, run-ins with the police, and the excruciating punishments he endured at the mercy of his maxed-out body. Ulrich also reached back nearly 30 years to when the death of the woman he loved drove him to begin running – and his dawning realization that he felt truly alive only when pushed to the limits.