A Burning in My Bones: The Authorized Biography of Eugene H. Peterson
Winn Collier

If you are a fan of Eugene Peterson—you loved his books, found fresh air in The Message, were sustained in ministry by his pastoral convictions—fear not.  A Burning in My Bones, his recently published biography, won’t taint your respect. Traversing Eugene’s story will only deepen your sense that, while very human, he was a gem.

I had the gift of being a friend of the Petersons for the last twenty-five years of their lives, and found it impossible to read this biography without thinking, what would Eugene have thought? This authorized biography means that author, pastor, writer and friend, Winn Collier, had access to his journals, letters, and many friends, but the book was completed after Eugene died, and several years after Eugene had the mental energy to assess it.  Could telling his story be an encouragement in Christ rather than just a boon for a publisher?

Winn Collier opens A Burning in My Bones with Eugene’s childhood in rural Montana, particularly his exceptional Pentecostal mother and business-driven father, and moves through his steps of attending Seattle Pacific University, finding his way to Biblical Seminary in New York City (“the only seminary he knew of”), marrying Jan, contemplating becoming a scholar but sidling into ministry, raising children, pastoring, writing, becoming a professor, completing The Message. These experiences have been well-documented (Eugene described these steps as “a dog following his nose without any clear direction”) but their impact on Eugene, far less so. Winn Collier wisely turns his attention and skill to delving into Eugene’s interior life, to the experiences that formed him not just as a pastor, but as a follower of Christ, a husband, a father, a professor, a feeble old man.  A Burning in My Bones is a biography of vistas, full of thoughtful reflections and admissions, even for those who knew him well.

Perhaps the most helpful vista Collier plumbs is that Eugene lived, wrote and continually felt that he never quite fit. As early as high school he was “athletic, friendly, and had the bearing of being … a quiet leader. But he never shook that sense of otherness.”  He wanted to be respected at Seattle Pacific but opportunities to lead felt elusive. He wondered if his Pentecostal upbringing gave him a suspicion of others, the feeling that he was “always an outsider.” Over and over, Eugene found himself making choices others found odd, even self-defeating. He wanted the quiet of Montana’s mountains rather than the possibilities of New York City, the small church rather than one with multiple services, more time in Scripture rather than meeting rock star Bono.  He longed for his books to gain respect but detested the ensuing adulation. Collier shows us that while Eugene didn’t purpose to be aloof, or countercultural; these strands in his psyche and their accompanying resilience, became a crucial strength. If you are going to push back at denominational leaders who want to you to focus on boosting church growth while you want to focus on prayer and maturity in Christ, you need to settle in to being a loner.

Eugene’s winding path to becoming a pastor is equally interesting. In seminary, he fell in love with the scriptures, writing:

“My reading of the Bible has become a conversation. I was no longer  reading words—I was listening to voices; I was observing how these words worked in association with all the other words on the page. And I was learning to listen carefully to these voices, these writers who were, well, writers.  Skilled writers, poets and storytellers who were artists of language ….words were not just words: words were holy.”

Increasingly passionate about both Greek and Hebrew, Eugene became fascinated with translation and soon moved on to doctoral work in Old Testament at Johns Hopkins. But the pastoral call kept tugging, and when he married Jan, her love of people and hospitality tugged him further still.

While some prefer to start their ministry under the guidance of a senior minister, Eugene wanted to lead a new congregation. Not surprisingly, he faced almost instant resistance.  “The ink on my ordination papers wasn’t even dry before I was being told by experts, so called, in the field of church that my main task was to run a church after the manner of my brother and sister Christians who run service stations, grocery stores…” He was convinced his congregation needed to worship, that rather than “disseminating information, he was trying to enter into a larger world—and invite others to do it with him.” Eugene was respected and gifted but those strengths never made being a pastor easier.

Collier also peers into the challenges Eugene navigated being a Christian. While he insisted that “his entire life, even the failures, even the treacherous places was lived under the mercy of God, led by his strong and generous hand,” Eugene was often baffled discerning what it meant to follow Christ. He ached over mental illness and the cultural pains of the day. Marriage, parenting, resting, racism, sexism, and capitalism were always perplexing, and often upsetting. He agonized over celebrity culture, and the rise of Donald Trump.  Several years into his work in Maryland he realized he was “a good pastor but not a very good human.” Eugene’s reflections, and Collier’s telling, offer both deep spiritual encouragement and wisdom—as well as empathy.  For all his feelings of being an outsider, this biography makes you feel less alone.

There are the occasional paragraphs and pages in A Burning in My Bones that I am quite sure would have made Eugene go silent, shake his head and say, “No. You can’t print that.” His journals might have been offered to Collier but I don’t think Eugene would have been comfortable having parts of them quoted. He found his many years pastoring in Maryland challenging but he truly loved that congregation, and he would never have wanted his frustration toward individuals or that community articulated in a way that made them feel that they were unusually difficult or cumbersome. Similarly, there are individuals with whom Eugene knew and worked with closely that I know at times he found annoying and frustrating, but he would not have wanted his private feelings expressed publicly. He was a man who blessed as deeply by what he did not say as by what he did, and the presence of some of his feelings stated in these pages feels antithetical to the Eugene I knew.

Eugene and Jan struggled with each other—they experienced the wrenching challenges of marriage—but they also adored each other. They relished each other’s company. He would not have wanted some of his frustrations with his wife written about publicly, nor would they have wanted their sex life mentioned more than once or twice. Eugene adhered to that sentiment that sex was a mystery and deserved its glow of silence.

Just as there are words included in this book that Eugene would not have wanted here, a few others felt missing.  Eugene, more than anyone I have ever known, embodied dwelling in the mysteries of God. He lived there, every day, all day. Embedded in prayer and Scripture, he dwelled in the middle of the magnificence of the mysteries and he dwelled in their agonies. He increasingly vivified the Psalms he loved so much (and read so brilliantly aloud), and in this place within the mysteries, Eugene was the saint he longed to be.

My husband occasionally offers a wonderful but annoying reminder, one which always earned Eugene’s grin, “Your life is not your project. Your life is God’s project.” Eugene Peterson sought to live his life as God’s project, and this biography is a fine reflection of that desire, and that grace. 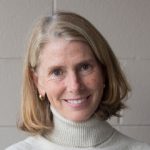 Julie Lane-Gay is a writer and editor in Vancouver, British Columbia. She is an avid gardener and trained horticulturist, who writes for garden magazines in the US and Canada. She is also the Senior Editor of of CRUX, Regent College's journal of thought and opinion and a Catechist at her Anglican church. She has the world's best dog, Finley the Border Collie.