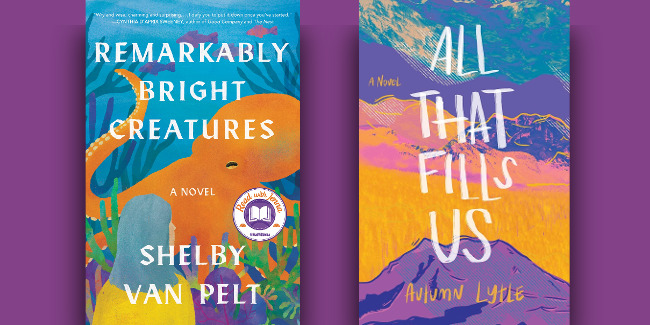 New Fiction May 2022 !!!  Here are some excellent new novels (and one book of stories) that will be released this month:

*** Love Reading Fiction ?
Sign up for our FREE weekly newsletter
featuring all the latest news, deals, and reviews!

For fans of A Man Called Ove, a charming, witty and compulsively readable exploration of friendship, reckoning, and hope that traces a widow’s unlikely connection with a giant Pacific octopus

After Tova Sullivan’s husband died, she began working the night shift at the Sowell Bay Aquarium, mopping floors and tidying up. Keeping busy has always helped her cope, which she’s been doing since her eighteen-year-old son, Erik, mysteriously vanished on a boat in Puget Sound over thirty years ago.

Tova becomes acquainted with curmudgeonly Marcellus, a giant Pacific octopus living at the aquarium. Marcellus knows more than anyone can imagine but wouldn’t dream of lifting one of his eight arms for his human captors—until he forms a remarkable friendship with Tova.

Ever the detective, Marcellus deduces what happened the night Tova’s son disappeared. And now Marcellus must use every trick his old invertebrate body can muster to unearth the truth for her before it’s too late.

Shelby Van Pelt’s debut novel is a gentle reminder that sometimes taking a hard look at the past can help uncover a future that once felt impossible.

All That Fills Us: A Novel

Mel Ellis knows that her eating disorder is ruining her life. Everyone tells her rehab is her best option, but she can’t bring herself to go. Broken and empty in more ways than one, Mel makes one last-ditch effort to make hers a story worth telling. She will walk her own road to recovery along the lesser-known trails of the North American wilderness.

Though she is physically and mentally unprepared to face the difficulties that lay ahead, she sets off on foot from Grand Rapids, Michigan, and heads toward Mount Rainier National Park in Washington State. During the long journey, she meets strangers with their own stories, as well as ghosts from her past who can no longer be ignored. But though the land she travels threatens her success at every turn, it’s her own dark thoughts she’ll have to overcome in order to find peace in the life and the body she has been given.

With pitch-perfect timing and delightfully witty self-awareness, debut author Autumn Lytle masterfully leads readers on a journey down the hard path toward healing.