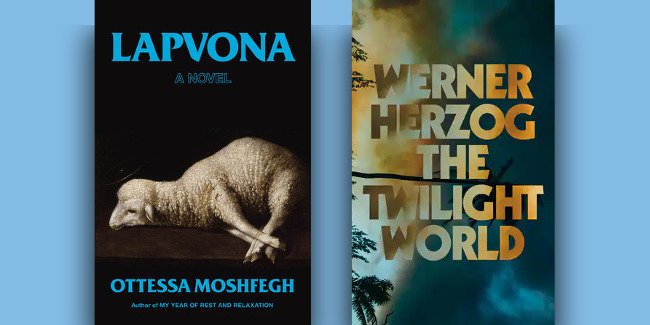 New Fiction June 2022 !!!  Here are some excellent new novels (and two books of stories) that will be released this month:

*** Love Reading Fiction ?
Sign up for our FREE weekly newsletter
featuring all the latest news, deals, and reviews!

“Lapvona flips all the conventions of familial and parental relations, putting hatred where love should be or a negotiation where grief should be . . . Through a mix of witchery, deception, murder, abuse, grand delusion, ludicrous conversations, and cringeworthy moments of bodily disgust, Moshfegh creates a world that you definitely don’t want to live in, but from which you can’t look away.” —The Atlantic

In a village in a medieval fiefdom buffeted by natural disasters, a motherless shepherd boy finds himself the unlikely pivot of a power struggle that puts all manner of faith to a savage test, in a spellbinding novel that represents Ottessa Moshfegh’s most exciting leap yet

Little Marek, the abused and delusional son of the village shepherd, never knew his mother; his father told him she died in childbirth. One of life’s few consolations for Marek is his enduring bond with the blind village midwife, Ina, who suckled him when he was a baby, as she did so many of the village’s children. Ina’s gifts extend beyond childcare: she possesses a unique ability to communicate with the natural world. Her gift often brings her the transmission of sacred knowledge on levels far beyond those available to other villagers, however religious they might be. For some people, Ina’s home in the woods outside of the village is a place to fear and to avoid, a godless place.

Among their number is Father Barnabas, the town priest and lackey for the depraved lord and governor, Villiam, whose hilltop manor contains a secret embarrassment of riches. The people’s desperate need to believe that there are powers that be who have their best interests at heart is put to a cruel test by Villiam and the priest, especially in this year of record drought and famine. But when fate brings Marek into violent proximity to the lord’s family, new and occult forces upset the old order. By year’s end, the veil between blindness and sight, life and death, the natural world and the spirit world, will prove to be very thin indeed.

“Nightcrawling bursts at the seams of every page and swallows you whole.” —Tommy Orange, author of There There

Kiara and her brother, Marcus, are scraping by in an East Oakland apartment complex optimistically called the Regal-Hi. Both have dropped out of high school, their family fractured by death and prison

But while Marcus clings to his dream of rap stardom, Kiara hunts for work to pay their rent—which has more than doubled—and to keep the nine-year-old boy next door, abandoned by his mother, safe and fed. One night, what begins as a drunken misunderstanding with a stranger turns into the job Kiara never imagined wanting but now desperately needs: nightcrawling. Her world breaks open even further when her name surfaces in an investigation that exposes her as a key witness in a massive scandal within the Oakland Police Department.

Rich with raw beauty, electrifying intensity, and piercing vulnerability, Nightcrawling marks the stunning arrival of a voice unlike any we have heard before.