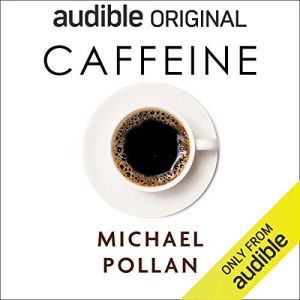 In a fascinating publishing venture, Michael Pollan has just released this title in audiobook format only. Scroll down to listen to an interview with Michael Pollan about CAFFEINE :

Michael Pollan, known for his best-selling nonfiction audio, including The Omnivores Dilemma and How to Change Your Mind, conceived and wrote Caffeine: How Caffeine Created the Modern World as an Audible Original. In this controversial and exciting listen, Pollan explores caffeine’s power as the most-used drug in the world – and the only one we give to children (in soda pop) as a treat.

Pollan takes us on a journey through the history of the drug, which was first discovered in a small part of East Africa and within a century became an addiction affecting most of the human species. Caffeine, it turns out, has changed the course of human history – won and lost wars, changed politics, dominated economies. What’s more, the author shows that the Industrial Revolution would have been impossible without it. The science of how the drug has evolved to addict us is no less fascinating. And caffeine has done all these things while hiding in plain sight! Percolated with Michael Pollan’s unique ability to entertain, inform, and perform, Caffeine is essential listening in a world where an estimated two billion cups of coffee are consumed every day.