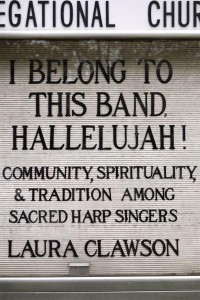 I Belong to This Band, Hallelujah!: Community, Spirituality, and Tradition among Sacred Harp Singers

Reviewed by Will Fitzgerald.
Sacred Harp singing, with its pulsing rhythm, heavy metal loudness, and impassioned 18th century spirituality, attracts a wide diversity of singers—people you’d never expect to come together to sing from a book of Christian hymns. It’s also attracted its share of participant scholars, such as David Warren Steel (Makers of the Sacred Harp), Buell E. Cobb (The Sacred Harp: A Tradition and Its Music), Kiri Miller (Traveling Home: Sacred Harp Singing and American Pluralism)—all the way back to George Pullen Jackson’s 1933 study, White Spirituals in the Southern Uplands: The Story of the Fasola Folk, Their Songs, Singings, and “Buckwheat Notes”. Clawson’s book joins this body of work, with a slight twist. Rather than focusing on the southern singers who nursed this tradition (as Jackson and Cobb do), or the non-southern “diaspora” singers whom Miller investigates, Clawson looks in depth at four locations where Sacred Harp singing occurs, two in the South (Sand Mountain, Alabama, and Holly Springs, Georgia) and two in the North (Chicago, Illinois, and Minneapolis, Minnesota). Additional chapters examine the effect of a bubble of interest that occurred when two Sacred Harp songs, sung by non-professional Sacred Harp singers, were included in the 2003 movie, Cold Mountain.

As a Sacred Harp singer myself, who has sung with all of these groups, I found the sections on Sand Mountain and Holly Springs to be particularly valuable, especially her examination of why Sand Mountain seems to be more viable than Holly Springs. This, despite Holly Springs’ being the home singing of Hugh McGraw, the chair of the committee that created the widely used 1991 edition of The Sacred Harp (in short: McGraw spent time evangelizing Sacred Harp in the north, and the local singing withered as a result).

Although Clawson’s book is a valuable addition to the ethnomusicology of modern Sacred Harp singing, with a fine attention to rich descriptions of the singing communities she examines, if I had to choose, I would recommend Kiri Miller’s book (for those interested in non-traditional singers), and Buell Cobb’s book (for those interested in southern singers, especially just as attention was starting to be paid by non-southerners to this music). More directly, I’d recommend that you look up “Sacred Harp singing” on your favorite search engine, attend a local singing, and discover these communities for yourself!