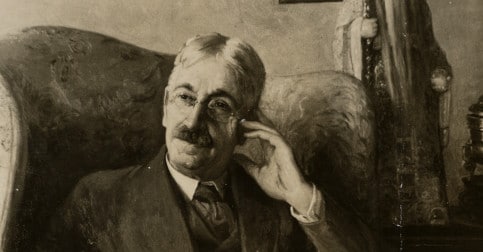 This Saturday (Oct 20) is the birthday of philosopher and educator, John Dewey.

In honor of the occasion, we offer this excerpt from his helpful book:

How We Think
John Dewey

§ 1. Varied Senses of the Term

Four senses of thought, from the wider to the limited

No words are oftener on our lips than thinking and thought. So profuse and varied, indeed, is our use of these words that it is not easy to define just what we mean by them. The aim of this chapter is to find a single consistent meaning. Assistance may be had by considering some typical ways in which the terms are employed. In the first place thought is used broadly, not to say loosely. Everything that comes to mind, that “goes through our heads,” is called a thought. To think of a thing is just to be conscious of it in any way whatsoever. Second, the term is restricted by excluding whatever is directly presented; we think (or think of) only such things as we do not directly see, hear, smell, or taste. Then, third, the meaning is further limited to beliefs that rest upon some kind of evidence or testimony. Of this third type, two kinds—or, rather, two degrees—must be discriminated. In some cases, a belief is accepted with slight or almost no attempt to state the grounds that support it. In other cases, the ground or basis for a belief is deliberately sought and its adequacy to support the belief examined. This process is called reflective thought; it alone is truly educative in value, and it forms, accordingly, the principal subject of this volume. We shall now briefly describe each of the four senses.

I. In its loosest sense, thinking signifies everything that, as we say, is “in our heads” or that “goes through our minds.” He who offers “a penny for your thoughts” does not expect to drive any great bargain. In calling the objects of his demand thoughts, he does not intend to ascribe to them dignity, consecutiveness, or truth. Any idle fancy, trivial recollection, or flitting impression will satisfy his demand. Daydreaming, building of castles in the air, that loose flux of casual and disconnected material that floats through our minds in relaxed moments are, in this random sense, thinking. More of our waking life than we should care to admit, even to ourselves, is likely to be whiled away in this inconsequential trifling with idle fancy and unsubstantial hope.

Reflective thought is consecutive, not merely a sequence

In this sense, silly folk and dullards think. The story is told of a man in slight repute for intelligence, who, desiring to be chosen selectman in his New England town, addressed a knot of neighbors in this wise: “I hear you don’t believe I know enough to hold office. I wish you to understand that I am thinking about something or other most of the time.” Now reflective thought is like this random coursing of things through the mind in that it consists of a succession of things thought of; but it is unlike, in that the mere chance occurrence of any chance “something or other” in an irregular sequence does not suffice. Reflection involves not simply a sequence of ideas, but a consequence—a consecutive ordering in such a way that each determines the next as its proper outcome, while each in turn leans back on its predecessors. The successive portions of the reflective thought grow out of one another and support one another; they do not come and go in a medley. Each phase is a step from something to something—technically speaking, it is a term of thought. Each term leaves a deposit which is utilized in the next term. The stream or flow becomes a train, chain, or thread.

The restriction of thinking to what goes beyond direct observation
Reflective thought aims, however, at belief

II. Even when thinking is used in a broad sense, it is usually restricted to matters not directly perceived: to what we do not see, smell, hear, or touch. We ask the man telling a story if he saw a certain incident happen, and his reply may be, “No, I only thought of it.” A note of invention, as distinct from faithful record of observation, is present. Most important in this class are successions of imaginative incidents and episodes which, having a certain coherence, hanging together on a continuous thread, lie between kaleidoscopic flights of fancy and considerations deliberately employed to establish a conclusion. The imaginative stories poured forth by children possess all degrees of internal congruity; some are disjointed, some are articulated. When connected, they simulate reflective thought; indeed, they usually occur in minds of logical capacity. These imaginative enterprises often precede thinking of the close-knit type and prepare the way for it. But they do not aim at knowledge, at belief about facts or in truths; and thereby they are marked off from reflective thought even when they most resemble it. Those who express such thoughts do not expect credence, but rather credit for a well-constructed plot or a well-arranged climax. They produce good stories, not—unless by chance —knowledge. Such thoughts are an efflorescence of feeling; the enhancement of a mood or sentiment is their aim; congruity of emotion, their binding tie.

III. In its next sense, thought denotes belief resting upon some basis, that is, real or supposed knowledge going beyond what is directly present. It is marked by acceptance or rejection of something as reasonably probable or improbable. This phase of thought, however, includes two such distinct types of belief that, even though their difference is strictly one of degree, not of kind, it becomes practically important to consider them separately. Some beliefs are accepted when their grounds have not themselves been considered, others are accepted because their grounds have been examined.

When we say, “Men used to think the world was flat,” or, “I thought you went by the house,” we express belief: something is accepted, held to, acquiesced in, or affirmed. But such thoughts may mean a supposition accepted without reference to its real grounds. These may be adequate, they may not; but their value with reference to the support they afford the belief has not been considered.

Such thoughts grow up unconsciously and without reference to the attainment of correct belief. They are picked up—we know not how. From obscure sources and by unnoticed channels they insinuate themselves into acceptance and become unconsciously a part of our mental furniture. Tradition, instruction, imitation—all of which depend upon authority in some form, or appeal to our own advantage, or fall in with a strong passion—are responsible for them. Such thoughts are prejudices, that is, prejudgments, not judgments proper that rest upon a survey of evidence.

IV. Thoughts that result in belief have an importance attached to them which leads to reflective thought, to conscious inquiry into the nature, conditions, and bearings of the belief. To think of whales and camels in the clouds is to entertain ourselves with fancies, terminable at our pleasure, which do not lead to any belief in particular. But to think of the world as flat is to ascribe a quality to a real thing as its real property. This conclusion denotes a connection among things and hence is not, like imaginative thought, plastic to our mood. Belief in the world’s flatness commits him who holds it to thinking in certain specific ways of other objects, such as the heavenly bodies, antipodes, the possibility of navigation. It prescribes to him actions in accordance with his conception of these objects.

The consequences of a belief upon other beliefs and upon behavior may be so important, then, that men are forced to consider the grounds or reasons of their belief and its logical consequences. This means reflective thought—thought in its eulogistic and emphatic sense.

Men thought the world was flat until Columbus thought it to be round. The earlier thought was a belief held because men had not the energy or the courage to question what those about them accepted and taught, especially as it was suggested and seemingly confirmed by obvious sensible facts. The thought of Columbus was a reasoned conclusion. It marked the close of study into facts, of scrutiny and revision of evidence, of working out the implications of various hypotheses, and of comparing these theoretical results with one another and with known facts. Because Columbus did not accept unhesitatingly the current traditional theory, because he doubted and inquired, he arrived at his thought. Skeptical of what, from long habit, seemed most certain, and credulous of what seemed impossible, he went on thinking until he could produce evidence for both his confidence and his disbelief. Even if his conclusion had finally turned out wrong, it would have been a different sort of belief from those it antagonized, because it was reached by a different method. Active, persistent, and careful consideration of any belief or supposed form of knowledge in the light of the grounds that support it, and the further conclusions to which it tends, constitutes reflective thought. Any one of the first three kinds of thought may elicit this type; but once begun, it is a conscious and voluntary effort to establish belief upon a firm basis of reasons.