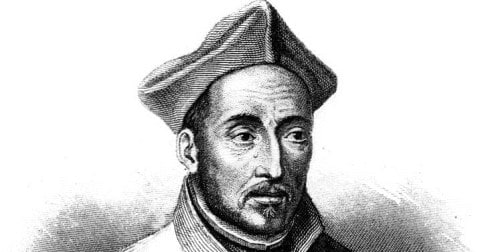 Today is the Feast of St. Ignatius of Loyola…

Ignatius of Loyola (c. October 23, 1491 – July 31, 1556) was a Spanish knight from a local Basque noble family, hermit, priest since 1537, and theologian, who founded the Society of Jesus (Jesuits) and, on 19 April 1541, became its first Superior General. Ignatius emerged as a religious leader during the Counter-Reformation. (via Wikipedia)

Download the full book as a FREE PDF ebook (via CCEL)

This method of prayer is meant more to give form, method and exercises, how the soul may prepare itself and benefit in them, and that the prayer may be acceptable, rather than to give any form or way of praying.

I. The Ten Commandments

Before entering on the prayer, let the spirit rest a little, the person being seated or walking about, as may seem best to him, considering where he is going and to what. (And this same addition
will be made at the beginning of all these Methods of Prayer.)

A Preparatory Prayer, as, for example, to ask grace of God our Lord that I may be able to know in what I have failed as to the Ten Commandments; and likewise to beg grace and help to amend in future, asking for perfect understanding of them, to keep them better and for the greater glory and praise of His Divine Majesty.

For the first Method of Prayer, it is well to consider and think on the First Commandment, how I have kept it and in what I have failed, keeping to the rule of spending the space of time one says the Our Father and the Hail Mary three times; and if in this time I find faults of mine, to ask pardon and forgiveness for them, and say an Our Father.

Let this same method be followed on each one of the Ten Commandments.

First Note. It is to be noted that when one comes to think on a Commandment on which he finds he has no habit of sinning, it is not necessary for him to delay so much time, but according as one finds in himself that he stumbles more or less on that Commandment so he ought  to keep himself more or less on the consideration and examination of it. And the same is to be observed on the Deadly Sins.

Second Note. After having finished the discussion already mentioned on all the Commandments, accusing myself on them and asking grace and help to amend hereafter, I am to finish with a Colloquy to God our Lord, according to the subject matter.

In order to know better the faults committed in the Deadly Sins, let their contraries be looked at: and so, to avoid them better, let the person purpose and with holy exercises see to acquiring and keeping the seven virtues contrary to them.

III. On the Bodily Senses

Pray in the same way described above, but focus on each of the five senses

Note. Whoever wants to imitate Christ our Lord in the use of his senses, let him in the Preparatory Prayer recommend himself to His Divine Majesty, and after considering on each sense, say a Hail Mary or an Our Father.

And whoever wants to imitate Our Lady in the use of the senses, let him in the Preparatory Prayer recommend himself to her, that she may get him grace from Her Son and Lord for it; and after considering on each sense, say a Hail Mary.