We reprint it here today in honor of Allen Ginsberg’s birthday.

Didn’t know that we have a print magazine?
Get more info and subscribe now… 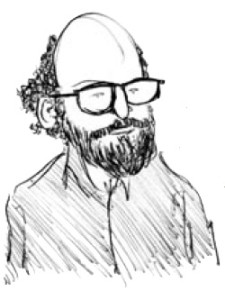 How Not To Be A Counter-Culture:
A few thoughts occasioned by a reading of Jack Kerouac and Allen Ginsberg’s correspondence

I have long been intrigued by the works and lives of the Beat writers, the spontaneity and attentiveness of their works combined with their critiques of the stifling culture of post-World-War-II middle-class American Christianity have been particularly appealing to me. Although the term “Beat Generation” is commonly used to refer to wide array of American counter-culturalists from the mid-1940s to the early-1960s, Jack Kerouac’s assessment in the essay “The Philosophy of the Beat Generation” (Esquire 1958) that the “Beat Generation” was a short-lived phenomenon in the late 1940s among a tight-knit group of friends based in New York City is widely accepted today. In order to understand this movement, if we accept Kerouac’s definition, we would do well to examine the relationships between those in this seminal group of New York friends. Key among those friends are Kerouac himself and Allen Ginsberg, and there is no better way to trace the arc of their friendship than by examining their correspondence. Thankfully, for ones like myself who have an interest in this sort of study, the bulk of the correspondence between these two writers has recently been published by Viking Books. This volume, entitled Jack Kerouac, Allen Ginsberg: The Letters, paints a vibrant picture of the counter-cultural movement spawned among Kerouac, Ginsberg and their New York friends and its infusion across the American landscape in the 1950s and early 1960s.

I think there is a deep sense among many followers of Christ today that the Church is also called to be some sort of counter-culture. However, despite this vague intuition, there is relatively little reflection on what this idea might mean. In fact, one of the greatest disappointments about Brett McCracken’s recent book Hipster Christianity, is precisely that it lacked any substantial reflection on both the idea of the church as a counter-culture and what the church might possibly learn from broader counter-cultural movements. I don’t presume to offer any significant answers to the question of what a Christian counter-culture should look like over the course of this relatively brief essay, rather I do posit that an exploration of the life and work of the key Beat writers might propel us a good way down the road toward an account of how to be a counter-culture, or more correctly in the case of the Church, how not to be a counter-culture.

It is telling that the correspondence between Kerouac and Ginsberg begins with details surrounding the murder of David Kammerer, in which Kerouac was implicated as an accomplice. Although it is widely known that the genesis of the Beat movement lay in large part in the staunch reaction to the atrocities of World War II and particularly to the use of nuclear force, it must be noted that the Beat movement was energized by its own sorts of retaliatory violence, not least of which was this particular murder that played at least a minor role in the forging of the friendship of Kerouac and Ginsberg. This pattern of returning violence for violence becomes a hallmark of Kerouac and Ginsberg’s lives, as well as of the circle of friends that surrounded them. They responded to the violence of patriarchy and legalistic sexual mores with their own sorts of “liberated” sexuality, which often veered into various forms of emotional, and occasionally physical, violence. They responded to the unimaginative violence of the uniformity of American middle-class culture by immersing themselves in the violence of criminal and drug culture. Indeed, perhaps the most recognized work of the Beat writers, Allen Ginsberg’s poem “Howl,” was initially hailed by American authorities as obscene. However, as fellow Beat writer Lawrence Ferlinghetti observed, it was not so much that poet or the poem was obscene but rather that the greater obscenity was what the poet was revealing in the culture around him. Again, we find a sort of returning like for like, obscenity for obscenity.